(REUTERS) – The number of migrants sleeping rough on the streets of Paris has risen by at least a third since the start of the week when the “Jungle” shanty town in Calais was evacuated, officials said on Friday.

Along the bustling boulevards and a canal in a northeastern corner of Paris, hundreds of tents have been pitched by migrants – mostly Africans who say they are from Sudan – with cardboard on the ground to try and insulate them from the autumn chill.

While the presence of migrants there is not new, it has grown substantially this week, Colombe Brossel, Paris deputy mayor in charge of security issues, told Reuters.

“We have seen a big increase since the start of the week. Last night, our teams counted 40 to 50 new tents there in two days,” Brossel said, adding there was now a total of 700 to 750.

“It’s not a huge explosion in numbers but there is a clear increase,” she said. “Some of them come from Calais, others from other places.” 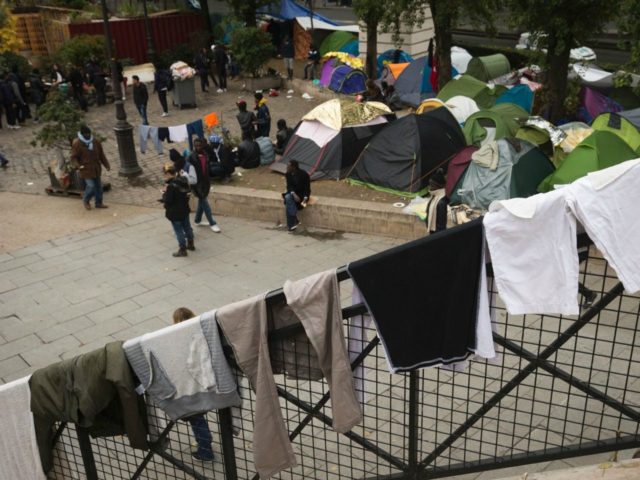 After years as serving as an illegal base camp for migrants trying to get to Britain, the “Jungle” at Calais was finally bulldozed this week and the more than 6,000 residents of the ramshackle camp near the English channel were relocated to shelters around France. More here.

In a bid to put the issue of illegal immigration back into the presidential debate, outspoken critic Sen. Jeff Sessions on Monday issued a “Critical Alert” warning of a potentially historic surge of over the border.

“We are simply overwhelmed,” his statement said. In it he estimated the Fiscal Year 2016 illegal crossings at 817,740.

“There is a crisis at our southwest border — one that in many ways exceeds the crisis we saw just two years ago, one that further undermines the integrity of our immigration system, but one that the most of the media has elected to ignore,” said Sessions, an advisor to Republican presidential nominee Donald Trump.

Sessions said the border crisis demands a new president and approach to reforming immigration starting with a closed border.

In part from Breitbart: Border Patrol Agent and NBPC President Brandon Judd spoke exclusively with Breitbart Texas and condemned the leadership of the Border Patrol’s parent agency, Customs and Border Protection (CBP), for allegedly “keeping this information secret” ahead of the 2016 U.S. presidential election.

“We are at breaking point. We have the highest number of illegal aliens in custody in history in Border Patrol’s RGV Sector and this information has been kept from the American public,” said Agent Judd. “The talk of amnesty has once again created pull factors and encouraged people from all over the world to cross Mexico and then cross our porous southern border to illegally enter the U.S. We are simply overwhelmed.” (See CBP’s response below.)

Agent Judd told Breitbart Texas that Americans should vote their conscience, but they should do so with all of the information available. “This is an issue of the federal government restricting crucial information from the public ahead of a presidential election and it is unacceptable. Americans deserve to know the truth. Our Border Patrol agents deserve for Americans to know what they are really facing. Too many Border Patrol agents have given their lives and left loved ones to grieve for CBP leadership to play these types of political games ahead of such an impactful election.”

Agent Cabrera said CBP were in fact concealing the gravity of the current border crisis. “One side in this coming election is downplaying illegal immigration and concealing this information only serves to help that agenda,” said Agent Cabrera.

Breitbart Texas reached out to the RGV Sector PIO for the Border Patrol and did not receive a response, though not much time was given to the agency. (See update below. A strong denial of the agents’ claims was issued by CBP to Breitbart Texas after publication.)

Historically, CBP, Border Patrol’s parent agency, has had to correct false assertions and denials. Perhaps the most glaring example occurred in June 2014 when an official CBP Twitter account directly accused this reporter of publishing a false report, only to later admit the report was accurate and true.

CBP has released numbers indicating near-record apprehensions; however, the assertions from the agents in the NBPC pertain to people who illegally entered the U.S. and are currently in custody in Border Patrol facilities. Agent Judd stated, “There is a significant difference between apprehension numbers and numbers in custody in our facilities. These record numbers in custody indicate that these are people who are not voluntarily returning. This indicates that these people will, under current policy, be released into our communities and given amnesty. This record number of people currently in detention is significant because the RGV Sector is dealing with the Gulf and Los Zetas cartels. This means our agents are busy babysitting record numbers in facilities instead of patrolling the border and stopping these murderers, kidnappers, and drug smugglers.” More here.

FNC: A federal judge has rebuked the Obama administration over the lack of Syrian Christians being admitted from the war-zone, calling it a “perplexing discrepancy” that only 56 of 11,000 Syrian refugees to the U.S. in fiscal 2016 were Christian.

The rebuke came in a Seventh Circuit Court of Appeals opinion on a Freedom of Information Act lawsuit filed by The Heartland Alliance’s National Immigrant Justice Center – a liberal human rights group that advocates for immigrants and asylum-seekers — seeking information on certain terror groups.

As first reported by attorney and former FEC member Hans von Spakovsky for The Daily Signal, while the court found in favor of the government, Judge Daniel Manion addressed the refugee issue and took aim at the Obama administration over how few Christians had been admitted to the U.S.

According to government figures, of the almost 11,000 Syrian refugees admitted to the United States in fiscal 2016, only 56 were Christian.

“To date, there has not been a good explanation for this perplexing discrepancy,” Manion noted.

The numbers are disproportionate to the Christian population in Syria, estimated last year by the U.S. government to make up roughly 10 percent of the population. Since the outbreak of civil war in 2011, it is estimated that between 500,000 and 1 million Christians have fled the country, while many have been targeted and slaughtered by the Islamic State.

Manion qualified his remarks by saying that his point “is not to suggest that any refugee group is more or less welcome: quite the contrary” but warned the Obama administration against failing to provide states with enough data on the people coming in.

In the case, the NIJC was requesting the identities of Tier III terrorist organizations, which are not publicly available. The administration argued that Tier III terrorist organizations “tend to be groups about which the U.S. government does not have good intelligence, making it essential that [DHS] be able to obtain information about them during screening interviews that are as focused and complete as possible.”

Manion noted that potential ties to a Tier III organization like a Christian militia may be why the government is not letting in as many Christians, but that it was impossible to tell since the information is not publicly available.

“It is at least possible that incidental affiliation with some Christian militia could lead an immigration officer to deny entry to Syrians on this basis. That would be a dubious consequence,” he wrote.

A State Department spokesperson told FoxNews.com in September that religion was only one of many factors used in determining a refugee’s eligibility to enter the United States.