Zerohedge: Now that the FBI has obtained the needed warrant to start poring over the 650,000 or so emails uncovered in Anthony Weiner’s notebook, among which thousands of emails sent from Huma Abedin using Hillary Clinton’s personal server, moments ago the US Justice Department announced it is also joining the probe, and as AP reported moments ago, vowed to dedicate all needed resources to quickly review the over half a million emails in the Clinton case. 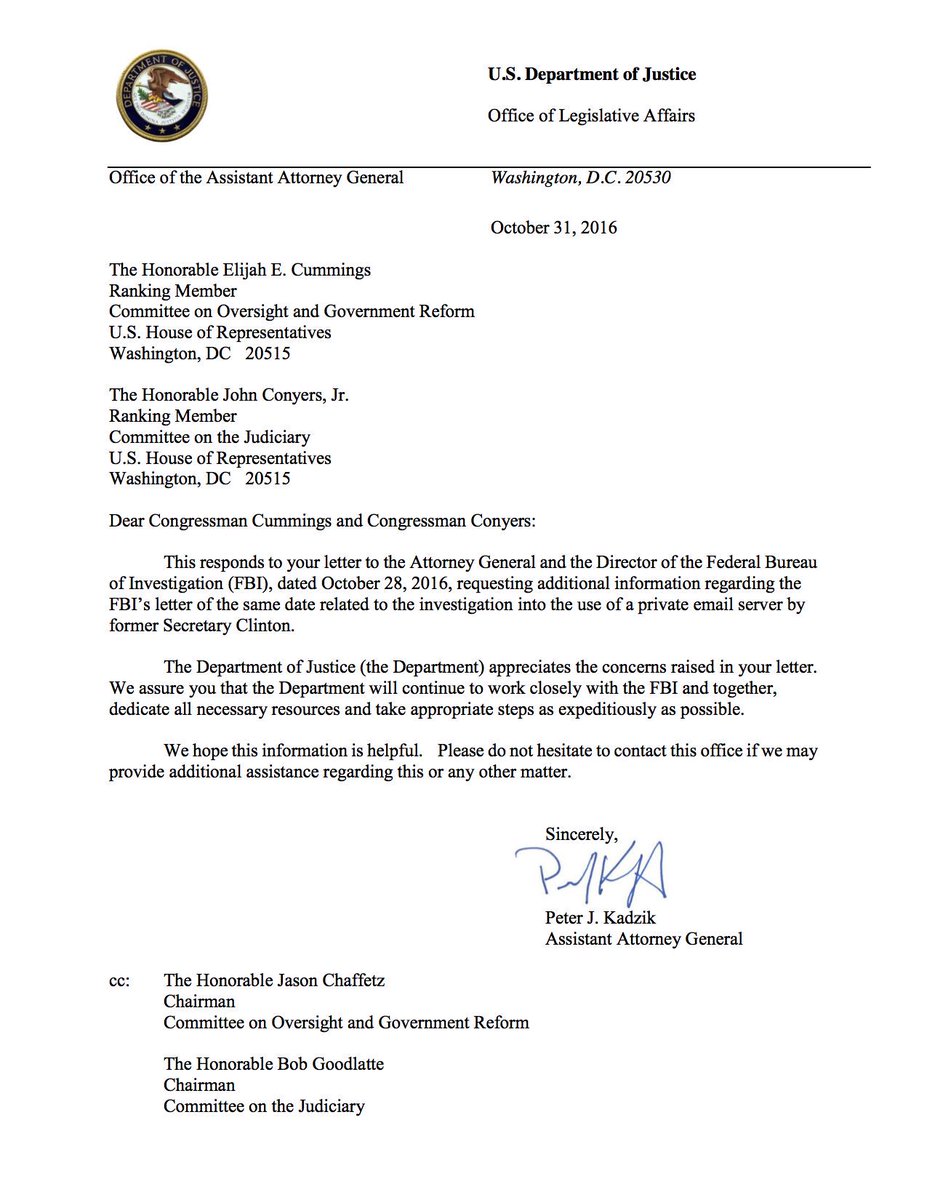 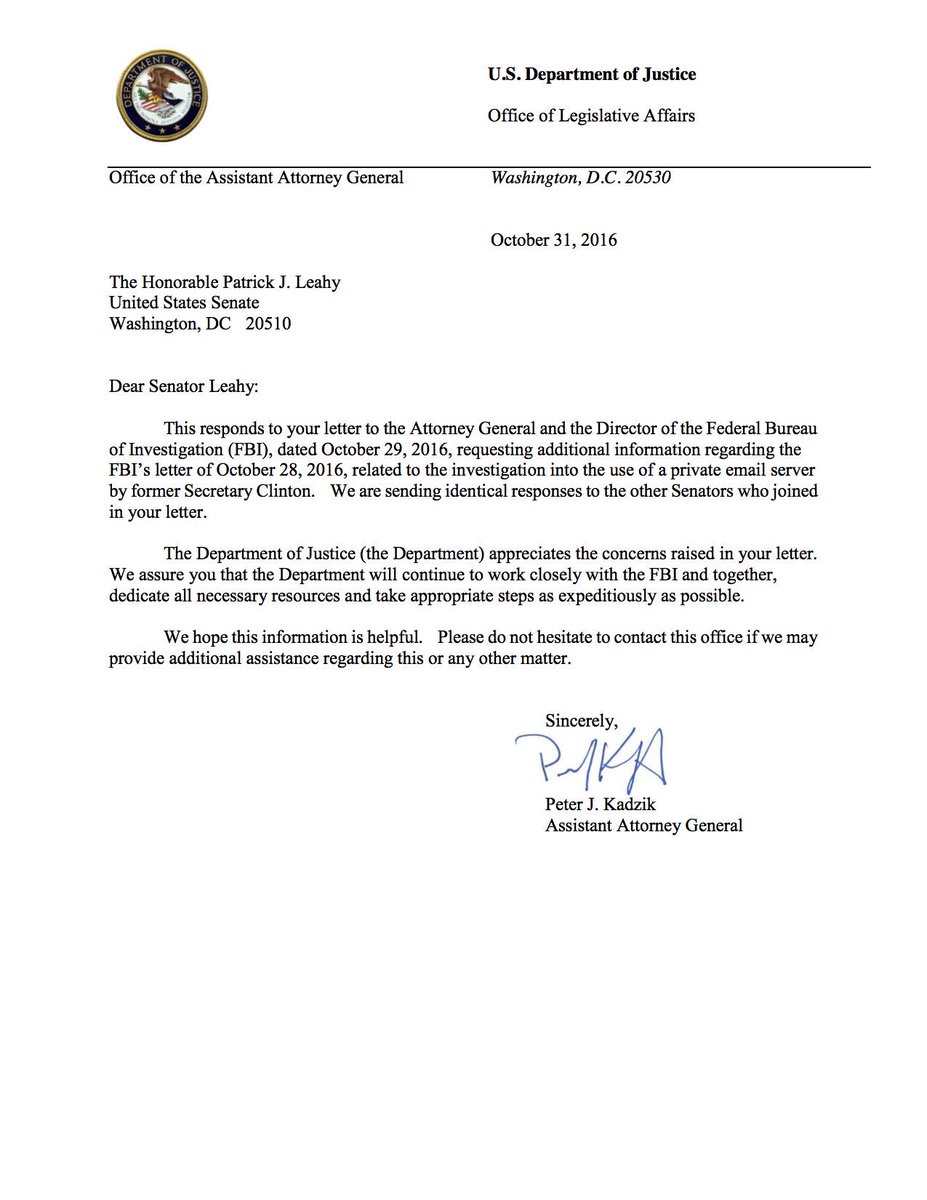 Just the Facts‏@JTF_News 3h3 hours ago

So far so good, even if one wonders just how active the DOJ will be in a case that has shown an unprecedented schism between the politically influenced Department of Justice and the FBI.

And yet, something felt odd about this.

Kadzik… Kadzik… where have we heard that name

Oh yes. Recall our post from last week, “Clinton Campaign Chair Had Dinner With Top DOJ Official One Day After Hillary’s Benghazi Hearing” in which we reported that John Podesta had dinner with one of the highest ranked DOJ officials the very day after Hillary Clinton’s Benghazi testimony?

It was Peter Kadzik.

In other words, the best friend of John Podesta, Clinton’s Campaign char, at the DOJ will be in charge of a probe that could potentially sink Hillary Clinton.

For those who missed it, this is what we reported previously:

The day after Hillary Clinton testified in front of the House Select Committee on Benghazi last October, John Podesta, Hillary’s campaign chairman met for dinner with a small group of well-connected friends, including Peter Kadzik, who is currently a top official at the US Justice Department serving as Assistant Attorney General for Legislative Affairs.

The post-Benghazi dinner was attended by Podesta, Kadzik, superlobbyist Vincent Roberti and other well-placed Beltway fixtures. The first mention of personal contact between Podesta and Kadzik in the Wikileaks dump is in an Oct. 23, 2015 email sent out by Vincent Roberti, a lobbyist who is close to Podesta and his superlobbyist brother, Tony Podesta. In it, Roberti refers to a dinner reservation at Posto, a Washington D.C. restaurant.  The dinner was set for 7:30 that evening, just one day after Clinton gave 11 hours of testimony to the Benghazi Committee.

Podesta and Kadzik met several months later for dinner at Podesta’s home, another email shows. Another email sent on May 5, 2015, Kadzik’s son asked Podesta for a job on the Clinton campaign.

As the Daily Caller noted, the dinner arrangement “is just the latest example of an apparent conflict of interest between the Clinton campaign and the federal agency charged with investigating the former secretary of state’s email practices.” As one former U.S. Attorney tells told the DC, the exchanges are another example of the Clinton campaign’s “cozy relationship” with the Obama Justice Department.

The hacked emails confirm that Podesta and Kadzik were in frequent contact. In one email from January, Kadzik and Podesta, who were classmates at Georgetown Law School in the 1970s, discussed plans to celebrate Podesta’s birthday. And in another sent last May, Kadzik’s son emailed Podesta asking for a job on the Clinton campaign.

“The political appointees in the Obama administration, especially in the Department of Justice, appear to be very partisan in nature and I don’t think had clean hands when it comes to the investigation of the private email server,” says Matthew Whitaker, the executive director of the Foundation for Accountability and Civic Trust, a government watchdog group.

“It’s the kind of thing the American people are frustrated about is that the politically powerful have insider access and have these kind of relationships that ultimately appear to always break to the benefit of Hillary Clinton,” he added, comparing the Podesta-Kadzik meetings to the revelation that Attorney General Loretta Lynch met in private with Bill Clinton at the airport in Phoenix days before the FBI and DOJ investigating Hillary Clinton.

Kadzik’s role at the DOJ, where he started in 2013, is particularly notable Kadzik, as helped spearhead the effort to nominate Lynch, who was heavily criticized for her secret meeting with the former president.

It gets better because, as we further revealed, if there is one person in the DOJ who is John Podesta’s, and thus the Clinton Foundation’s inside man, it is Peter Kadjik.

Kadzik represented Podesta during the Monica Lewinsky investigation. And in the waning days of the Bill Clinton administration, Kadzik lobbied Podesta on behalf of Marc Rich, the fugitive who Bill Clinton controversially pardoned on his last day in office. That history is cited by Podesta in another email hacked from his Gmail account. In a Sept. 2008 email, which the Washington Free Beacon flagged last week, Podesta emailed an Obama campaign official to recommend Kadzik for a supportive role in the campaign. Podesta, who would later head up the Obama White House transition effort, wrote that Kadzik was a “fantastic lawyer” who “kept me out of jail.”

Podesta was caught in a sticky situation in both the Lewinsky affair and the Rich pardon scandal. As deputy chief of staff to Clinton in 1996, Podesta asked then-United Nations ambassador Bill Richardson to hire the 23-year-old Lewinsky. In April 1996, the White House transferred Lewinsky from her job as a White House intern to the Pentagon in order to keep her and Bill Clinton separate. But the Clinton team also wanted to keep Lewinsky happy so that she would not spill the beans about her sexual relationship with Clinton.

Richardson later recounted in his autobiography that he offered Lewinsky the position but that she declined it.

Podesta made false statements to a grand jury impaneled by Independent Counsel Kenneth Starr for the investigation. But he defended the falsehoods, saying later that he was merely relaying false information from Clinton that he did not know was inaccurate at the time. “He did lie to me,” Podesta said about Clinton in a National Public Radio interview in 1998. Clinton was acquitted by the Senate in Feb. 1999 of perjury and obstruction of justice charges related to the Lewinsky probe. Kadzik, then a lawyer with the firm Dickstein Shapiro Morin & Oshinsky, represented Podesta through the fiasco.

Podesta had been promoted to Clinton’s chief of staff when he and Kadzik became embroiled in another scandal.

Kadzik was then representing Marc Rich, a billionaire financier who was wanted by the U.S. government for evading a $48 million tax bill. The fugitive, who was also implicated in illegal trading activity with nations that sponsored terrorism, had been living in Switzerland for 17 years when he sought the pardon. To help Rich, Kadzik lobbied Podesta heavily in the weeks before Clinton left office on Jan. 20, 2001. A House Oversight Committee report released in May 2002 stated that “Kadzik was recruited into Marc Rich’s lobbying campaign because he was a long-time friend of White House Chief of Staff John Podesta.”

The report noted that Kadzik contacted Podesta at least seven times regarding Rich’s pardon. On top of the all-hands-on-deck lobbying effort, Rich’s ex-wife, Denise Rich, had doled out more than $1 million to the Clintons and other Democrats prior to the pardon. She gave $100,000 to Hillary Clinton’s New York Senate campaign and another $450,000 to the Clinton presidential library.

In his current role as head of the Office of Legislative Affairs, Kadzik handles inquiries from Congress on a variety of issues. In that role he was not in the direct chain of command on the Clinton investigation. The Justice Department and FBI have insisted that career investigators oversaw the investigation, which concluded in July with no charges filed against Clinton.

But Kadzik worked on other Clinton email issues in his dealings with Congress. Last November, he denied a request from Republican lawmakers to appoint a special counsel to lead the investigation.

In a Feb. 1, 2016 letter in response to Kadzik, Florida Rep. Ron DeSantis noted that Kadzik had explained “that special counsel may be appointed at the discretion of the Attorney General when an investigation or prosecution by the Department of Justice would create a potential conflict of interest.”

DeSantis, a Republican, suggested that Lynch’s appointment by Bill Clinton in 1999 as U.S. Attorney in New York may be considered a conflict of interest. He also asserted that Obama’s political appointees — a list which includes Kadzik — “are being asked to impartially execute their respective duties as Department of Justice officials that may involve an investigation into the activities of the forerunner for the Democratic nomination for President of the United States.”

It is unknown if Kadzik responded to DeSantis’ questions.

Kadzik’s first involvement in the Clinton email brouhaha came in a Sept. 24, 2015 response letter to Senate Judiciary Committee chairman Chuck Grassley in which he declined to confirm or deny whether the DOJ was investigating Clinton. Last month, Politico reported that Kadzik angered Republican lawmakers when, in a classified briefing, he declined to say whether Clinton aides who received DOJ immunity were required to cooperate with congressional probes.

Kadzik also testified at a House Oversight Committee hearing last month on the issue of classifications and redactions in the FBI’s files of the Clinton email investigation.

And now it seems that Kadjik will be in charge of the DOJ’s “probe” into Huma Abedin’s emails. Which is why we are a little skeptical the DOJ will find “anything” of note.