CIA Director Mike Pompeo said on Fox News Sunday with Chris Wallace that the CIA provided accurate intelligence on the DPRK nuclear program and policymakers too, were well aware even before Pompeo took over the agency.

When you look closely enough you will find serial numbers belonging to Pakistan, China and Russia…

Related reading and the graphs: Where did Iran get its military arms over the last 70 years?

Looking back and open source information is that statement accurate? When investigative media does the job of investigating and informs, Pompeo is correct. Furthermore, Iran was and is part of all the variables such that Barack, Hillary and John overlooked it all. How so? That pesky JPOA. Then cultivating the original Wikileaks cables, there was more…. 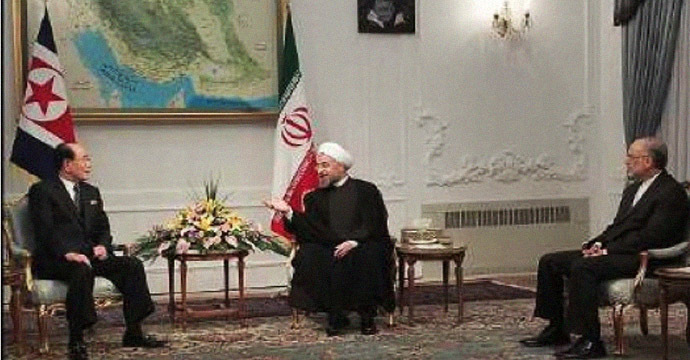 In the shank of the Obama administration, 2011 please note the following:

VIENNA, Sept 18 (Reuters) – It is one of the West’s biggest nuclear
proliferation nightmares — that increasingly isolated Iran and North
Korea might covertly trade know-how, material or technology that could be
put to developing atomic bombs.

“Such a relationship would be logical and beneficial to both North Korea
and Iran,” said Mark Hibbs, an expert of the Carnegie Endowment for
International Peace.

Last year, a U.N. report suggested that impoverished, reclusive North
Korea might have supplied Iran as well as Syria and Myanmar with banned
atomic technology.

In what could be a sign of this, a German newspaper last month reported
that North Korea had provided Iran with a computer programme as part of
intensified cooperation that could help the Islamic state build nuclear
weapons.

“There are reports and rumours, which governments and the IAEA (the U.N.
International Atomic Energy Agency) have not denied, indicating that there
may be a track record of bilateral nuclear cooperation between North Korea
and Iran,” Hibbs said.

But while this could make sense for two states facing tightening sanctions
— and potentially earn Pyongyang some badly needed funds — the extent
and nature of any such dealings, if they take place at all, remain
shrouded in mystery.
“It seems to be very difficult to sort out what the relationship in the
nuclear world between DPRK (North Korea) and Iran is. We just simply do
not know,” prominent U.S. nuclear scientist Siegfried Hecker said.

This was in contrast to missile cooperation between the two countries,
where North Korea has helped Iran both with the weapons and in building
related factories, he said.

Hecker, who has often visited the east Asian state, said possible
Tehran-Pyongyang atomic technology transfers would be a major concern for
everyone dedicated to preventing the proliferation of nuclear weapons.

Iran’s nuclear programme is based on uranium enrichment, activity which
can have both civilian and military purposes.

North Korea has twice tested plutonium-based nuclear devices, drawing
international condemnation, although it last year revealed the existence
also of a uranium enrichment site, potentially giving it a second pathway
to bombs.
“They complement each other so well (in terms of their expertise). There
is just a lot of synergy in how they would be able to exchange
capabilities,” Hecker said at a seminar for diplomats in Vienna, the
IAEA’s headquarters, this month.
Citing Western intelligence sources, the Munich newspaper Sueddeutsche
Zeitung said in August that North Korea had this year delivered software,
originally developed in the United States, that could simulate neutron
flows.

Such calculations, which can help scientists identify self-sustaining
chain reactions, are vital in the construction of reactors and also in the
development of nuclear explosives.

With the help of the programme, Iran could gain important knowledge of how
to assemble nuclear weapons, the paper said.

There has been no public confirmation or denial of the report in the West.
But Hecker did not rule it out, saying Pyongyang had demonstrated
experience in this field.

He said North Korea must have some “nuclear code capabilities” which they
would have been able to assess in comparison with the result of an atomic
test.
“So to some extent they have had an opportunity to verify or check their
codes,” Hecker said. “Iran has not had a chance to do that. So exchanging
that type of information … you could see as being very useful.”

North Korea tested nuclear devices in 2006 and 2009, but still has not
shown it has a working nuclear bomb.

Proliferation experts have said the country has enough fissile material
for up to 10 nuclear weapons. But they don’t believe Pyongyang is yet
capable of miniaturising the material to fit into the cone of a missile.

While North Korea has made no secret of its nuclear weapons ambitions,
Iran denies Western allegations that it is covertly seeking to develop an
atomic arms capability.

The Islamic Republic says its nuclear programme is for purposes of
electricity generation, but its refusal to halt uranium enrichment and its
stonewalling of a U.N. nuclear watchdog probe have stoked suspicions
abroad.

The Vienna-based U.N. nuclear watchdog said this month in a report that it
was “increasingly concerned” about possible work in Iran to develop a
nuclear missile.

For several years, the IAEA has been investigating Western intelligence
reports indicating Iran has coordinated efforts to process uranium, test
high explosives and revamp a ballistic missile cone to accommodate a
nuclear warhead.

Iran says the allegations are baseless and forged.

In a separate report on North Korea, from which its inspectors were
expelled in 2009, the IAEA suggested past nuclear-related ties with Syria
and Libya, but it made no mention of Iran.
Proliferation expert Mark Fitzpatrick said it would not be hard for Tehran
and Pyongyang to put “well-practised trade deals and transfer routes” from
their ballistic missile cooperation to use also in the nuclear field.
Still, there were few signs of any nuclear cooperation between the two
countries.

“It is not for lack of looking. Western intelligence agencies are
intensively targeting nuclear acquisition efforts by Iran and North
Korea,” Fitzpatrick, a former senior U.S. State Department official, said.

“Yet finding nuclear weapons-related trade is akin to the proverbial
needle in a haystack. In the vastness of ocean and sky routes, most forms
of nuclear-related cargo are so minute as to be almost undetectable.”

Hibbs said any nuclear dealings with North Korea would pose risks for
Iran: “Were this traffic to be confirmed, that would deepen the suspicion
that Iran is involved in nuclear activities which are clandestine and
military in nature.”

What about China selling weapons to Iran and operating groups being still worried about non-proliferation by North North Korea? Lots of chatter of that and left unresolved:

5. (S) Noting a decrease in the sales of Chinese conventional weapons to Iran, DASD Sedney expressed appreciation for China’s efforts to limit conventional arms sales to Iran. Sedney emphasized that Iran’s spreading of conventional BEIJING 00000058 002 OF 003 weapons to Iraq, Afghanistan, and Lebanon poses the serious problem of Chinese weapons killing U.S. soldiers. Sedney expressed concern about Iran’s nuclear program. More on that cable here, of note is the distribution list.

So under Obama it seems we left the A.Q. Khan sanctions to the Export Import Bank and the IAEA: From Secretary of State to the United Nations/Vienna by method deliver of a telegram and SIPDIS