Diosdado Cabello is a drug dealer and knows about death warrants on adversaries. His former bodyguard arrived in the United States 2 years ago to advise the DEA.

Leamsy Salazar arrived in the country on January 26 accompanied by agents belonging to the US Drug Enforcement Agency (DEA). The US officials had previously convinced the army lieutenant commander and former security chief under late President Hugo Chávez to give evidence before a judge in New York. 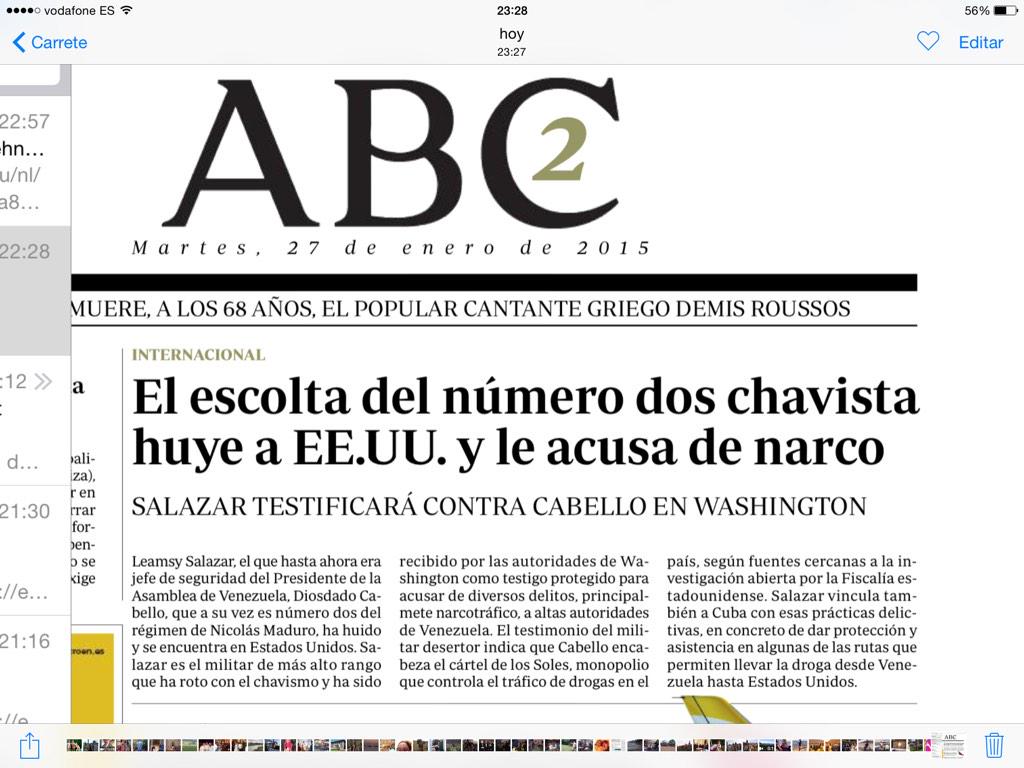 Salazar becomes the highest ranking military official to break with Chavismo and come under Washington’s wing, as a witness to a range of charges levelled against senior figures in the Venezuelan government.

Salazar has already testified that Cabello heads up the Soles cartel, a criminal organization that monopolized drug trafficking within the country, according to sources involved in the case.

An post shared on Twitter by Ramón Pérez-Maura, an ABC journalist covering the case, stated that Salazar’s testimony had also linked Cuba with the country’s narcotrafficking trade, “offering protection to certain routes along which drugs were brought to Venezuela from the United States.”

Pérez-Maura‘s colleague in New York Emili J. Blasco added further details that Cabello gave direct orders for the distribution of illicit substances, and that Salazar knew of locations where the accused “keeps mountains of dollar bills.”

Powerful Venezuelan lawmaker may have issued death order against Rubio, US memo says

One of Venezuela’s most powerful leaders may have put out an order to kill U.S. Sen. Marco Rubio, R-Fla., a fervent critic of the South American country’s government, according to intelligence obtained by the U.S. last month.

Though federal authorities couldn’t be sure at the time if the uncorroborated threat was real, they took it seriously enough that Rubio has been guarded by a security detail for several weeks in both Washington and Miami.

Diosdado Cabello, the influential former military chief and lawmaker from the ruling socialist party who has publicly feuded with Rubio, was believed to have issued the order.

At a July 19 Senate hearing, the same day he was first spotted with more security, Rubio repeated his line that Cabello –– who has long been suspected by U.S. authorities of drug trafficking –– is “the Pablo Escobar of Venezuela.” A week ago on Twitter, Cabello called the senator “Narco Rubio.”

The death threat was outlined in a memo to several law enforcement agencies last month by the Department of Homeland Security. The memo, designated “law enforcement sensitive” but not classified, was obtained by the Miami Herald.

The memo revealed an “order to have Senator Rubio assassinated,” though it also warned that “no specific information regarding an assassination plot against Senator Rubio has been garnered thus far” and that the U.S. had not been able to verify the threat. That Cabello has been a Rubio critic in Venezuelan media was also noted, a sign that federal authorities are well aware of the political bluster complicating the situation.

According to the memo, Cabello might have gone as far as to contact “unspecified Mexican nationals” in connection with his plan to harm Rubio.

The U.S. believes that Cabello controls all of Venezuela’s security forces. Rubio has President Donald Trump’s ear on U.S. policy toward Venezuela.

The Venezuelan Embassy in Washington declined to comment. Venezuela’s Ministry of Communication and Information said Sunday that it could not respond to media queries until Monday. Messages sent to some of Cabello’s email addresses were not returned.

Rubio declined comment through a spokeswoman. His office previously sent questions about the security detail to Capitol Police, which did not respond Saturday but has in the past also declined comment.

Capitol Police are “responsible for the security of members of Congress,” Homeland Security spokesman David Lapan said in a statement. “It would be inappropriate for DHS to comment on the seriousness of the threat.”

Lawmakers have been on heightened alert since a June 14 shooting in Virginia targeted Republican members of Congress practicing baseball. House Majority Whip Steve Scalise, R-Calif., was critically injured. He was protected by Capitol Police officers, who killed the shooter, only because he is a member of congressional leadership.

Rubio has led the push for a robust U.S. response against Venezuelan President Nicolas Maduro’s government before and after a disputed July 30 vote that elected a new legislative body whose powers supersede all other government branches, including the opposition-held parliament. Rubio has publicly warned Maduro to beware of people in his inner circle who might be looking to betray him.

The White House was succeeding in creating a regional coalition to pressure Maduro until Trump said Friday that a “military option” in Venezuela remained possible, despite little to no support in the U.S., Venezuela or Latin America for such intervention.

“We’re not surprised by threats from the empire, from its chief Trump,” Cabello wrote Saturday on Twitter. “In the face of such deranged imperial threats, each person should man their trench. Mine will be next to the people defending the fatherland!”

For years, U.S. authorities have investigated Cabello and other high-ranking Venezuelan government members for suspected drug smuggling, an allegation Cabello has denied. Earlier this year, the U.S. accused Vice President Tareck El Aissami of being a drug kingpin and later revealed that he had at least $500 million in illicit funds overseas.

Cabello is a former army lieutenant who was close to the late President Hugo Chavez and fought alongside him in a failed 1992 coup. A former vice president and head of parliament, Cabello is now a delegate to the new constituent assembly. He continues to exert great influence over the ruling United Socialist Party of Venezuela.

Cabello is not, however, among the 30 Venezuelan officials –– including Maduro himself –– whom the Trump administration has recently placed under financial sanctions for undermining democracy, engaging in corruption and repressing dissent.