When is enough…enough? How much land does Israel need to give up before the Palestinians are satisfied? The answer? ALL OF IT. If Israel was to vacate all of Israel and land on Mars, all the anti-Israel factions would still not be happy….why? Countless leaders and organizations was Israelis ….dead. 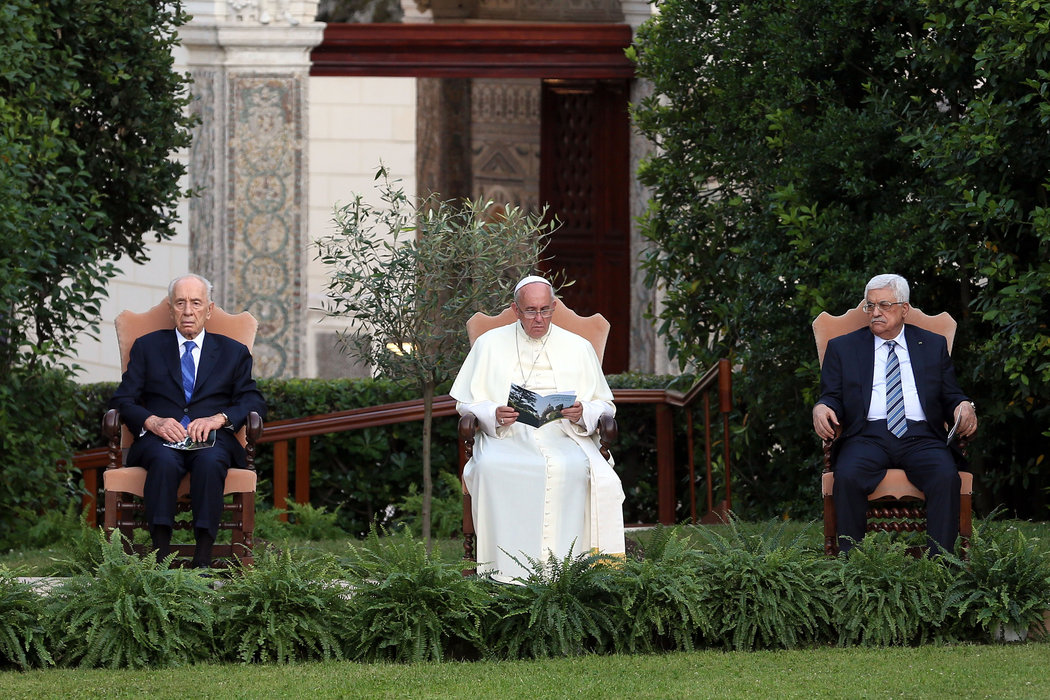 Pope Francis at the Vatican in 2014 with Presidents Shimon Peres of Israel, left, and Mahmoud Abbas of the Palestinian Authority. Credit Franco Origlia/Getty Images

A Sinister Echo of Replacement Theology

The Zionist Organization of America (ZOA) has criticized the Vatican for organizing and promoting tours of Christian sites in Jerusalem, Israel’s capital city, as part of tours to ‘Palestine,’ erasing Israel from the picture. The ZOA regards this a sinister reiteration of Catholic replacement theology, whereby Jews and Judaism are theologically dismissed from history. Replacement theology served for centuries as the warrant and inspiration for theologically-inspired hatred, as well as vicious persecution of, and violence against, Jews.

A report from Italian journalist Giulio Meotti, a writer for the Italian daily, Il Foglio, indicates that Opera Romana Pellegrinaggi, a Vatican office that organizes pilgrimages to Christian sites around the world, sponsors a trip in “Palestine,” with iconic Christian sites in Israel’s capital city of Jerusalem. This is in addition to the fact that, as Meotti writes, “Catholic tourist maps and pilgrimage brochures omitted the name ‘Israel,’ using instead the sanitized expression ‘Holy Land,’ one of the visible effects of the Catholic ‘replacement theology,’ which adopts a de–Judaizing language. It [is also] no secret that Catholic pilgrims spend virtually all their time visiting holy sites in Palestinian-run territory, staying in Palestinian Arab hotels and listening to Palestinian Arab tour guides. As a result, these pilgrims return filled with hatred towards Israel” (Giulio Meotti, ‘Vatican buses promote trips to Jerusalem, “Palestine,”’ Israel National News, November 23, 2016).

ZOA National President Morton A. Klein said, “The ZOA is deeply critical of the Vatican’s organizing and promotion of tours to Israel, the biblical, historical and legal homeland of the Jewish people, which erase and thus deny the Jewish identity, indeed the very name, of the country, substituting ‘Palestine.’

“‘Palestine’ was never and is not now a sovereign state, much less one with legal responsibility or effective control of many of the sites being visited on these tours. Palestine is not even an Arab name but named by the Romans.

“With its Nostra Aetate declaration in 1965, the Catholic Church repudiated its historical position holding the Jewish people responsible for the death of Jesus, renounced its traditional claim that Jews had been rejected by God, condemned anti-Semitism, and called for ‘mutual understanding and respect’ between Catholics and Jews. It is difficult to see how this epoch-making new affirmation and policy is being in any way honored by the Vatican with respect to the tours to Israel that it organizes and promotes.

“When Pope John Paul II visited the Rome Synagogue in 1986 –– the first pontiff to visit a synagogue –– he embraced Rabbi Elio Toaff and declared Jews the ‘elder brothers’ of Christians. One does not treat an elder brother as non-existent and revise one’s language to avoid referring to him, while exclusively seeking the company of his hostile neighbors.

“We urge the Vatican to cease organizing and promoting tours to Israel that do not name the country, do not refer to its Jewish history and which shun contacts with the country of its ‘elder brothers.’”

Jimmy Carter to Barack Obama: Recognize the State of Palestine

Former U.S. president Jimmy Carter delivers a lecture on the eradication of the Guinea worm, at the House of Lords, February 3, London. Carter has called for Barack Obama to recognize the State of Palestine. Eddie Mullholland-WPA Pool/Getty

Newsweek: Former U.S. president Jimmy Carter, who brokered peace between Egypt and Israel at Camp David, has called on Barack Obama to recognize the State of Palestine (as the United Nations refers to the non-member observer state) before he leaves office in January.

Of the U.N.’s 193 members, 136—more than 70 percent—recognize the State of Palestine and the Palestinian push for an independent state. But the U.S., Israel and dozens of other nations do not, with many arguing that the recognition of a Palestinian entity can only come about through direct talks and agreement between the Israelis and the Palestinians.

The current U.S. government supports a two-state solution but Israeli ministers have suggested that the election of Donald Trump as the next president has dealt a huge blow to hopes of a Palestinian state. On the campaign trail, Trump pledged to move the U.S. Embassy to Jerusalem and called for continued Israeli settlement building in the West Bank and East Jerusalem.

Carter has now stepped into the debate with an op-ed for the New York Times on Monday.

“It has been President Obama’s aim to support a negotiated end to the conflict based on two states, living side by side in peace. That prospect is now in grave doubt,” he wrote. “I am convinced that the United States can still shape the future of the Israeli-Palestinian conflict before a change in presidents, but time is very short.

“The simple but vital step this administration must take before its term expires on Jan. 20 is to grant American diplomatic recognition to the state of Palestine, as 137 countries have already done, and help it achieve full United Nations membership.”

Carter added that U.S. recognition of Palestinian hopes for a sovereign state, combined with a U.N. Security Council resolution “grounded in international law,” and U.N. membership for the Palestinians would assist future diplomatic efforts to seal a lasting peace agreement.

The former president, who published a book on the conflict entitled Palestine: Peace Not Apartheid in 2006, warned that the prospect of peace is slowly slipping away from the Israelis and the Palestinians.

He said that Israeli moves in the West Bank, past the armistice lines marked before its capture of the West Bank and East Jerusalem in the 1967 Six-Day War, are bringing both sides ever closer to a “one-state reality” where Israel would preside over more than four million Palestinians living in the two territories, as well as the Gaza Strip.

“Israel is building more and more settlements, displacing Palestinians and entrenching its occupation of Palestinian lands,” Carter writes in the New York Times. “Over 4.5 million Palestinians live in these occupied territories, but are not citizens of Israel. Most live largely under Israeli military rule, and do not vote in Israel’s national elections.”

He continued: “Meanwhile, about 600,000 Israeli settlers in Palestine enjoy the benefits of Israeli citizenship and laws. This process is hastening a one-state reality that could destroy Israeli democracy and will result in intensifying international condemnation of Israel.”

The last U.S.-brokered peace talks collapsed in April 2014 and Israel has rejected international initiatives proposed since, the most recent being the French plan to host an international peace conference in Paris. Israeli Prime Minister Benjamin Netanyahu says that he is open to talking with Palestinian president Mahmoud Abbas but only bilaterally and without pre-conditions, such as the removal of settlers from the West Bank or the end of Israel’s military occupation of the West Bank.