Federal dollars going to California could or should be considered foreign aid. Why? Read on…

The federal government spends some $367.8 billion a year on California. That’s an average of about $9,500 for every woman, man and child in the state.

In truth, the money isn’t spread out evenly. About 56 cents of every federal dollar spent in California, according to the analysis, goes to health or retirement benefits — Social Security, Medicare and money for low-income residents’ health care through the Medi-Cal program.

Defense contracts are the next biggest slice of the pie, followed by paychecks to military and civilian government employees. From there, federal spending gets sprinkled among a number of programs run by the state government. Gov. Jerry Brown’s recent budget plan pegged those funds at a total of $105 billion, equivalent to about 58% of state taxpayer dollars to be spent in the fiscal year that begins on July 1. 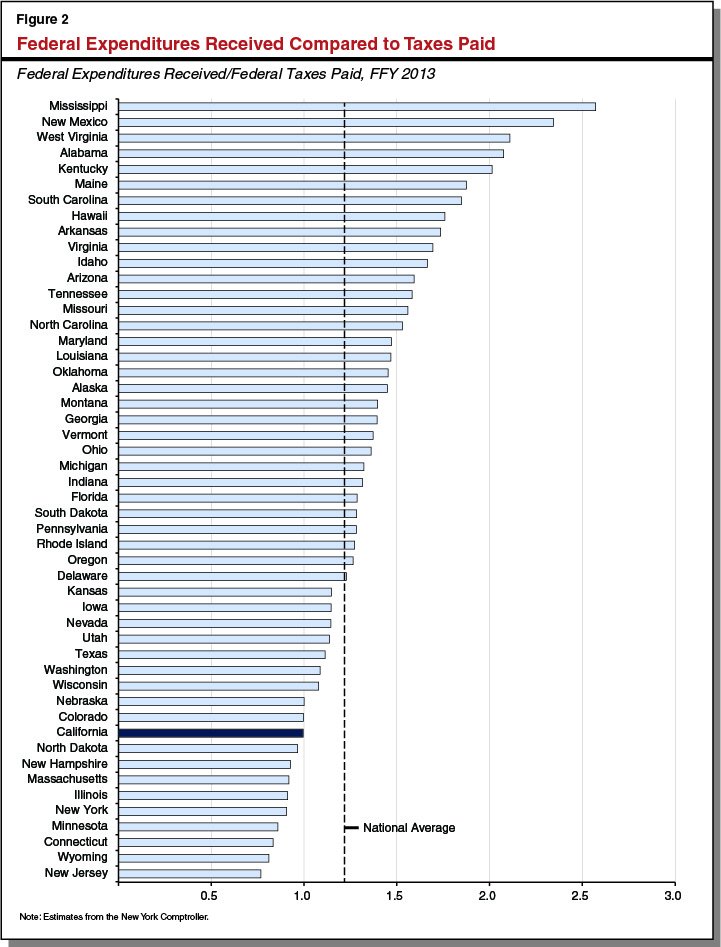 A detailed report is here.

So, now that California is officially a sanctuary state under SB54, effective January1, 2018, those illegals, felons and those plotting threats with regard to national security can freely travel anywhere, this is not just a California problem.

Last year, when President Donald Trump issued an executive order to cut funding from counties that limit cooperation with U.S. immigration authorities, Santa Clara County stood to lose $1.7 billion in federal funding. After fighting the order, a federal judge ruled in favor of the county. Now that the entire state is following the same guidelines, some leaders argue it could strengthen their position in future legal battles.

Not everyone is onboard, however. Some California sheriff’s departments have criticized the new sanctuary state law, saying it will lead to broad roundups that could lead to collateral arrests. More here.

There is a key word in this new law, it is ‘prohibits’.

State Senate Leader Kevin de Leon, the author of the bill, has argued that public safety will be undermined if the law isn’t passed. It is estimated that more than 2 million undocumented people live in California — with hundreds of thousands from Asia as well as Latin America — and advocates say many will be scared to interact with official institutions if they fear that will put them on federal immigration agents’ radar. They say individuals might not report violent crimes to police, might not send their kids to school or might not seek medical care at the local hospital. And there is some evidence to back that up: Earlier this year, the Los Angeles Police Department said that Latino communities were reporting fewer instances of sexual assault and domestic violence because of concerns about deportation under Trump. More here.

De León has begun calling labor leaders and elected officials to inform them of his plans, the sources said, and is expected to soon announce his campaign against Feinstein, a giant of California Democratic politics who has held the office since 1992.
The 50-year-old de León, who represents Los Angeles and is seen as a leading Latino voice in Democratic politics, is likely to campaign aggressively against President Donald Trump. He began signaling he could oppose Feinstein in late August, after she said Trump could “be a good president” and that he “can learn and change.” Feinstein later clarified that she is “under no illusion that it’s likely to happen and will continue to oppose his policies.” More here.

So who is this de Leon character? That is a challenge to determine and he has not been fully forthcoming on his own history. Check it out here.
We also had this sexual harassment case, where de Leon was the roommate. Hummm. He was also a college dropout.

De León was the first and only person in his family to graduate from high school and attend college. He started out at the University of California Santa Barbara, but it was a challenge. He had moxie but no organizational skills, no practice at taking notes or studying for a test. He didn’t last long.

He couldn’t go back home and tell his mother of his failure. Instead, he went to work for One Stop Immigration Center, a nonprofit in Los Angeles that helps undocumented immigrants fill out paperwork and teaches them English, history and organizing.

Then, the Attorney General for California is Javier Beccera.  He is a loyal and dedicated supported of the Dream Act and will defend all cases against California becoming a sanctuary state. Meanwhile, remember that whole Pakistani IT case in Congress under Debbie Wasserman Schultz?

Now-indicted former congressional IT aide Imran Awan allegedly routed data from numerous House Democrats to a secret server. Police grew suspicious and requested a copy of the server early this year, but they were provided with an elaborate falsified image designed to hide the massive violations. The falsified image is what ultimately triggered their ban from the House network Feb. 2, according to a senior House official with direct knowledge of the investigation.

The secret server was connected to the House Democratic Caucus, an organization chaired by then-Rep. Xavier Becerra. Police informed Becerra that the server was the subject of an investigation and requested a copy of it. Authorities considered the false image they received to be interference in a criminal investigation, the senior official said.

On Jan. 24, 2017, Becerra vacated his congressional seat to become California’s attorney general. “He wanted to wipe his server, and we brought to his attention it was under investigation. The light-off was we asked for an image of the server, and they deliberately turned over a fake server,” the senior official said.

“They were using the House Democratic Caucus as their central service warehouse … It was a breach. The data was completely out of [the members’] possession. Does it mean it was sold to the Russians? I don’t know,” the senior official said.

Capitol Police considered the image a sign that the Awans knew exactly what they were doing and were going to great lengths to try to cover it up, the senior official said. The House Sergeant-at-Arms banned them from the network as a result.

The senior official said the data was also funneled offsite via a Dropbox account, from which copies could easily be downloaded. Authorities could not immediately shut down the account when the Awans were banned from the network because it was not an official account. More here.

One last item…don’t forget to keep Eric Holder in the whole mix regarding California.

The California Senate is throwing its support behind Chicago in a lawsuit against the Justice Department over its plan to withhold federal money from “sanctuary cities,” which limit collaboration between state and local authorities with federal immigration agents.

U.S. Atty. Gen. Jeff Sessions, Holder says, does not have the constitutional authority to mandate that cities, counties or states participate in federal immigration efforts as a condition to receive their federal public safety awards.

The lawsuit, filed last month by Chicago Mayor Rahm Emanuel and city officials, asks a judge to block the Trump administration from enforcing three new conditions it included in petitions for Edward Byrne Memorial Justice Assistance Grant money. The city uses the grant to buy police cars and other equipment, and to fund an anti-violence program.

Holder, who was said to have filed the brief pro-bono, was temporarily hired by the Senate and Assembly to serve as outside counsel to offer advice on the state’s legal strategy against the incoming administration. On Friday, a Covington & Burling spokeswoman said the firm remains “engaged with the California Senate on an ongoing basis.”

In the brief, Holder said the California Legislature has a particular interest in the Chicago case as it weighs Senate Bill 54, which seeks to limit state and local law enforcement agencies from using resources to question, detain and provide information on immigrants illegally in the country.

Covington & Burling analyzed the legislation this year and concluded that “states have the power over the health and safety of their residents and allocation of state resources.”