It used to be that anyone chosen to be in a presidential cabinet role experienced exceptional resume scrutiny before they were selected. It is likely that remains the case under the Biden administration and that should tell another part of the story….the Biden advisors are supporters themselves are Marxists. Further, the American people are forced to accept associated policies and legislation that is playing out today under this administration.

So, who is Saule Omarova? Apparently she is a person that all democrats approve of since not one person on the Left has expressed worry or criticism.Saule Omarova specializes in regulation of financial institutions, banking law, international finance, and corporate finance. Before joining Cornell Law School in 2014, she was the George R. Ward Associate Professor of Law at the University of North Carolina School of Law.

She is also part of the Berggruen Institute. What is that?

Founded in 2010 by philanthropist and investor Nicolas Berggruen, the Berggruen Institute develops the foundational ideas and critical analysis needed to unlock enduring progress for political, economic, and social institutions in the 21st century. Since its inception, the Berggruen Institute has launched the 21st Century Council, the Council for the Future of Europe, the Berggruen China Center, the Think Long Committee for California, and the signature Berggruen Prize for Philosophy and Culture.

In partnership with the University of Southern California Dornsife Center on Science, Technology and Public Life (STPL), Berggruen Fellowships offer scholars flexible periods of work and study in both the United States and China. 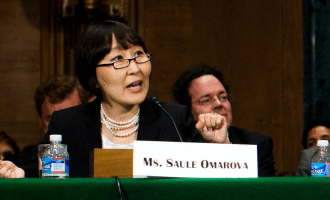 Saule Omarova, President Biden’s pick to be the comptroller of the currency within the Treasury Department, appears to have joined a Facebook group for Marxist and socialist discussion in 2019, according to a post in the group called “Marxist Analysis and Policy.”

The post links to a Facebook account that’s been in operation since at least 2017 with a profile picture that appears to be of Omarova. The account’s profile picture has 85 visible likes and 14 visible comments, some of which appear to be from people who would reasonably run in the same social circles as Omarova. Those include a University of Minnesota law professor and a Cornell engineering professor.

The White House announced that it is nominating Omarova – a Cornell law professor – to run the key post that regulates national banks last month. Since then, Omarova has drawn harsh scrutiny for her past comments that were very hostile toward the financial services industry. She’s also been attacked over her Moscow State University thesis about Marxism, which Sen. Pat Toomey, R-Pa., is demanding that she turn over to the Banking Committee.

The Facebook group’s description states that it is for socialism and against capitalism.

“This Marxist group is a platform for analysis, policy (sic) and polemics from the perspectives of a diverse range of Socialist and anti-capitalist views,” it says. “We are against exploitation, inequality, racial (sic) discrimination and ecological destruction at the core of Capitalist social relations. The working class has the potential and the ability to change Capitalism and in the process change itself. Only working people, by (sic) their own efforts, can free themselves from Capitalism. We stand for the self emancipation of the working class and Socialism.”

The group’s rules say, “No personal abuse will be allowed. Nor will racist or fascist comments be tolerated. Support for the Tory party is not acceptable. A culture of diverse Marxist, Socialist and radical views is the framework for the group.”

The posts in the group appear to indicate that it is a forum for serious ideological discussion, and not a parody forum. A post in the group from Oct. 19 promotes a lecture by a Dublin City University professor about “A Marxist Narrative, From Marx and Engels to COVID-19.”

Older posts include the “ACAB” (All Cops are Bastards) slogan, and celebrate the 2020 Seattle autonomous zone protest as at the center of the battle for socialism.

“Seattle emerged once again as the center of anti-capitalist mobilizations,” one poster wrote. “The protestors occupied 6 blocks, and declared them to be police-free areas. They operate like a ‘soviet’ with many radical anti-police, and anti-capitalist speeches.”

The poster added: “The radicalization of the youth and young workers in Seattle is very important. It shows a way for the protests in the rest of the country. This is one of these times that the masses radicalize very fast, and they are open for revolutionary socialist alternatives to the decaying capitalism.” More here

Will anyone in the media ask Jen Psaki or ol Joe himself if they support Marxist’s ideology of if they themselves are Marxists?