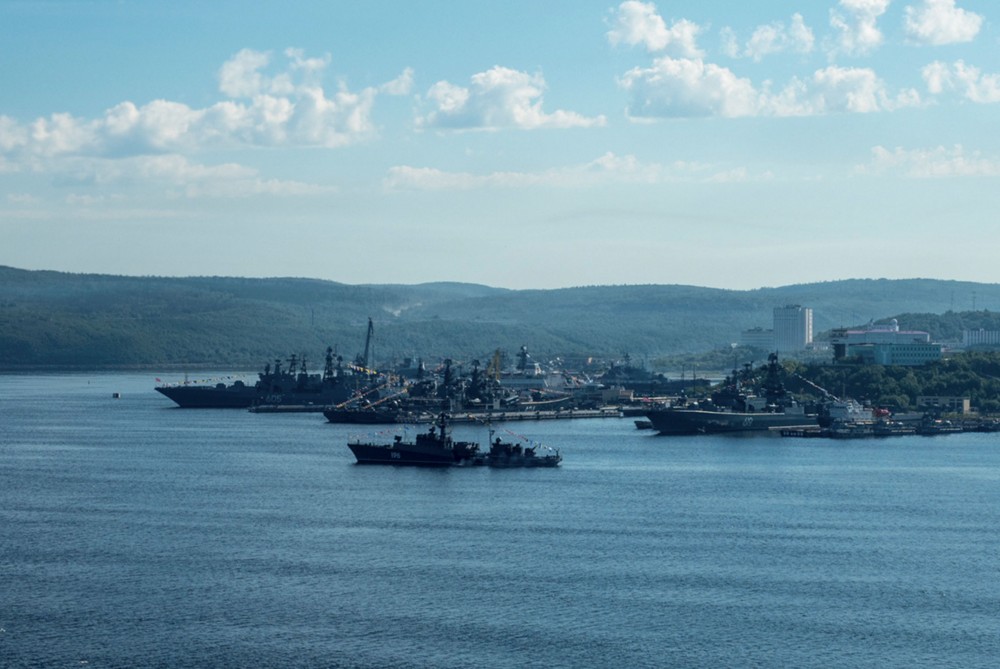 It will include about 50 vessels and is held as a preparatory phase to the upcoming «Zapad-2017» drills.

The Northern Fleet, the most powerful of Russia’s five fleets, is unfolding a special exercise which includes key parts of fleet capacities.

The drills will be headed directly by Russian Navy Head Commander Vladimir Korolyev and will last «for several days», the Northern Fleet informs.

Included are about 50 ships, submarines and support vessels. Also aircrafts, helicopters from the Air Force and Air Defense will be deployed, a Navy representative says to Interfax.

The drills are held as several of the most powerful Northern Fleet vessels are on their way home after participation in a Navy parade outside St.Petersburg.  Among them are battle cruiser «Pyotr Veliky» and typhoon-class submarine «Dmitry Donskoy».

It is likely that the returning vessels will take part in the exercise.

In the course of the training, antisubmarine and anti-sabotage activities will be conducted along with navigational, hydrographical, anti-mine and search and rescue operations.

According to the Navy representatives, the exercise is held as a preparatory phase to the large-scale joint Russian-Belarus drills «Zapad-2017» scheduled for the period 14-20 September.

Russia’s leadership is angling to annex its closest western neighbor during upcoming military drills, according to the former leader of Georgia. Mikheil Saakashvili made the comments on the anniversary of his own country’s brief conflict with Moscow that resulted in Russian troops cordoning off Georgia’s two northern regions.

Referring to the much anticipated joint Russian-Belarusian drill in the Baltic region, the former president said: “What we are seeing in Belarus, I think that Russia is planning to take and annex Belarus.” Saakashvili, who is a longtime critic of Russian President Vladimir Putin, spoke to told Baltic news agency BNS ahead of the drill, called Zapad and scheduled for September.

Lithuania, a NATO ally that borders with Russia, has expressed concern that the drill indicates a wider threat to the alliance, constituting a “simulated” attack. NATO has demanded that Russia allows for more transparency in the drill, nominally set to involve around 12,000 troops. However, Russia has previously sparked much bigger exercises to go in tandem with drills such as Zapad, upping the number of troops from the promised levels.

“During the drill, infrastructure will be brought in,” Saakashvili said. “In that sense the threat [from Russia] has not disappeared rather it only grows. It is just that until now Ukrainians have held it at its own borders [with Russia].”

Saakashvili was president of Georgia until 2013, when he lost the election and left the country for Ukraine. He was made a Ukrainian citizen and appointed as governor of Ukraine’s Odessa region in 2015 by Petro Poroshenko after the revolution that brought the pro-Europe, pro-West government to power.

His reputation as a hardline opponent of the Kremlin’s foreign policy and his imposing oratorical style made him popular quickly, and he was tipped to be the country’s next prime minister. But his often combative manner and vows to “clean up” corrupt Ukrainian institutions, put him at odds with established political figures. Ukraine stripped him of his citizenship in 2017 and he became a stateless person. He has dismissed it, and Georgia’s previous decision to strip him of citizenship, as political decisions by governments that have fallen out with him.

Despite enjoying Western support for his hawkish positions on Russia and for his campaigns against corruption, Saakashvili’s leadership of Georgia was not without its critics. The European Union criticized his decision-making during a 2008 political crisis that sparked a five day war with Russia. Under Saakashvili’s command, Georgian forces tried to restore control over two of its regions that have declared independence under Russian military sponsorship.

Belarus’s President Alexander Lukashenko has dismissed concerns that Zapad is anything but a routine defense drill. “We traditionally carry out these drills with Russia,” he said in July. Although strongly reliant on Russia in most regards, the Belarusian government has shown some signs of disagreement with its bigger partner in what the two countries symbolically call “the Union State.”

Despite a Kremlin push to deploy an airbase in Belarus, Minsk has resisted that initiative. The Union State relationship— a post-Soviet branding of Minsk and Moscow’s close relationship—looked in minor jeopardy earlier this year when Russia responded to Belarus’s looser visa-regime for Westerners by starting border checks between the two countries.

Jamestown has a more detailed summary, in part:

In the exercise scenario used for the Zapad series of exercises, there is undoubtedly a NATO dimension. This stems from Moscow’s response, opposition and complete rejection on political and legal grounds of the 1999 NATO bombing of Serbia. The events of 1999 loom large today in Russian strategic thinking and are also reflected in how the General Staff approaches the planning for a Zapad exercise. Consequently, while there is currently a Western preoccupation with the possibility of a Russian offensive operation against the Baltic States, in Moscow’s view the more likely scenario of conflict erupting on Russia’s periphery with NATO stems from an Allied intervention in Belarus. As a result, the Zapad 2017 exercise will place all operational and scenario activities under a defensive guise in response to foreign intervention, demanding a response to protect the Russia-Belarus Union State (Regnum, July 11).

Some Russian commentaries show awareness of the concern expressed by Alliance members about Zapad 2017 and its potentially aggressive rehearsal of operations against its members from Belarusian territory: these suggestions are, of course, the subject of much derision. However, there are indications of some features of the joint exercise that will come into play in September to which NATO must pay additional attention. The first is the extent to which Zapad 2017 will fine-tune joint operations carried out by the elite airborne and special forces units of Belarus and Russia. Such preparation occurred in early April, with these forces rehearsing joint operations in the Vitebsk Region in Belarus over an area of 12,000 square kilometers. The focus was on parachute landings, reconnaissance, and action to fix and locate enemy forces. During these tactical-level exercises, elite troops were also tasked with establishing the best areas to land the “main force” and coordinating air cover for these forces. On April 11–13, a parachute company from the 106th Airborne Division (Tula) relocated to Brest and, in close coordination with Belarusian counterparts as well as interior troops, worked on training tasks to block and defeat four groups of “illegal armed formations,” which had broken into strategically important facilities in the region (Nezavisimaya Voyennoye Obozreniye, June 16).

In a related preparation for Zapad 2017, in May, a one-week tactical exercise involved the electronic warfare (EW) forces of Belarus and Russia, using three training grounds in Brest and Vitebsk Regions. Whereas the elite and special forces tactical exercises had an alleged terrorist dimension, the joint EW exercises were clearly aimed against a conventionally armed opponent. They focused upon joint EW operations against a high-technology opponent operating in a “complex electronic environment.” The development of the joint force capabilities to protect the Union State is seen in Moscow as reflecting developments within modern local wars and armed conflicts. The EW component of Zapad 2017 will thus prove to be an integral part of the rehearsal of joint operations (Nezavisimaya Voyennoye Obozreniye, June 16).