Belize and Costa Rica are thriving. Tourism for Belize is the top economic earner, then comes sugar and citrus production. The country enjoys an estimated annual growth of 2.5%. Costa Rica also has a strong economy with almost 4% annual growth and both countries have foreign investors.

So when it comes to El Salvador, Guatemala and Honduras, they are among the poorest countries in the region. Seems those countries maintain an 85% poverty rate. The SOUTHCOM  Commander, Navy Admiral Craig Faller was in the region in January for a week visit to the three countries discussing security cooperation with emphasis on training, counter-drug missions and humanitarian operations. The United States maintains flight operations that track, detect and monitor all vehicles and crafts for illicit drug trafficking.

USAID has these cockamamie work plans in the region that promotes prosperity. That includes securing borders, increasing economic and business opportunities and stopping corruption. How is that working out? Just skim this document for context.

USAID gives $181 million to Honduras annually. Guatemala receives $257 million while El Salvador accepts $118 million. But hold on that is not all. We also have this other U. S. organization called Millennium Challenge. This is yet another cockamamie operation designed to partner with countries worldwide to promote growth and lift people out of poverty while investing in future generations through education.

So, check out how the caravans are using social media and encrypted communications to mobilize.

How does a Central American migrant caravan form?

By MARIA VERZA and MARCOS ALEMANtoday 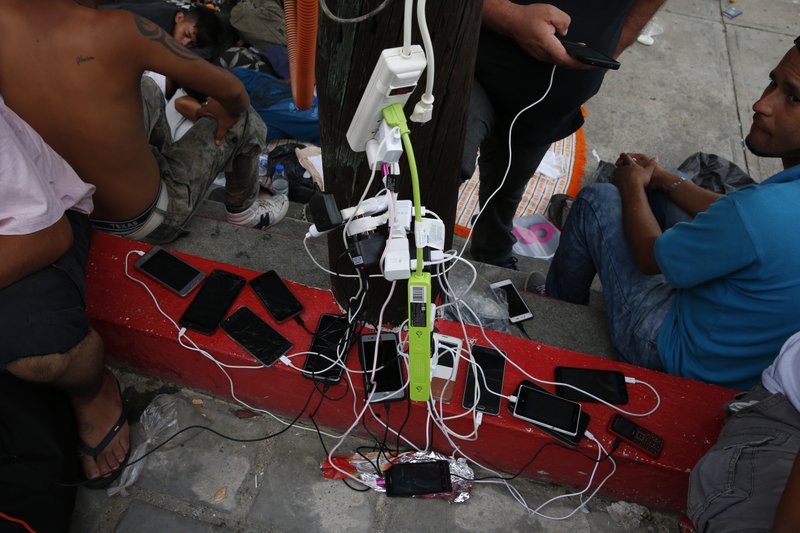 In this Oct. 28, 2018 file photo, migrants charge their cell phones as a caravan of Central Americans trying to reach the U.S. border halts for a rest day in San Pedro Tapanatepec, Oaxaca state, Mexico. Hundreds of Central Americans are now getting as many details as possible before leaving north towards the U.S. border. Increasingly they’re organized over Facebook and WhatsApp as they try to join together in large groups they hope will make the trip safer, and without having to hide themselves from authorities. (AP Photo/Rebecca Blackwell, File)

SAN SALVADOR, El Salvador (AP) — “When does the next caravan leave?” ″Can I go? I’m from Guatemala.” ″What papers do I need for my kids?”

The questions pile up on the phones of hundreds of Central Americans, all with the same goal: Get as many details as possible before leaving their country.

Costly phone calls with relatives and friends in the United States to work out the route or find the best smuggler are a thing of the past for many Central Americans. Now would-be migrants create chat groups and organize using social media to leave in caravans.

“The social networks have had an empowering role in this new way of migrating,” said Abbdel Camargo, an anthropologist at the College of the Southern Border in Mexico. “They organize themselves en masse in their home countries, formed by entire families, and the networks serve them as a mechanism for safety and communication throughout the journey.”

The roots of the migrant caravan phenomenon began years ago when activists organized processions – often with a religious theme – during Holy Week to dramatize the hardships and needs of migrants. A minority of those involved wound up traveling all the way to the U.S. border.

That changed last year: On Oct. 13, hundreds of people walked out of Honduras and as the days passed and they crossed Guatemala, the group grew to more than 7,000 migrants. U.S. President Donald Trump seized on the new phenomenon to ramp up his anti-immigrant policies.

Since then, and parallel to the usual clandestine migrant flow north, smaller caravans have continued to leave the so-called Northern Triangle of Honduras, El Salvador and Guatemala.

And increasingly they’re organized over Facebook and WhatsApp as they try to join together in large groups they hope will make the trip safer, and without having to hide from authorities.

The most recent caravan left the bus station in San Pedro Sula in northern Honduras on April 10, and journalists from The Associated Press have been following various online migrant chats since late March.

“Anyone know anything about the caravan leaving on the 10th? They say the mother of all caravans is going,” one message said. 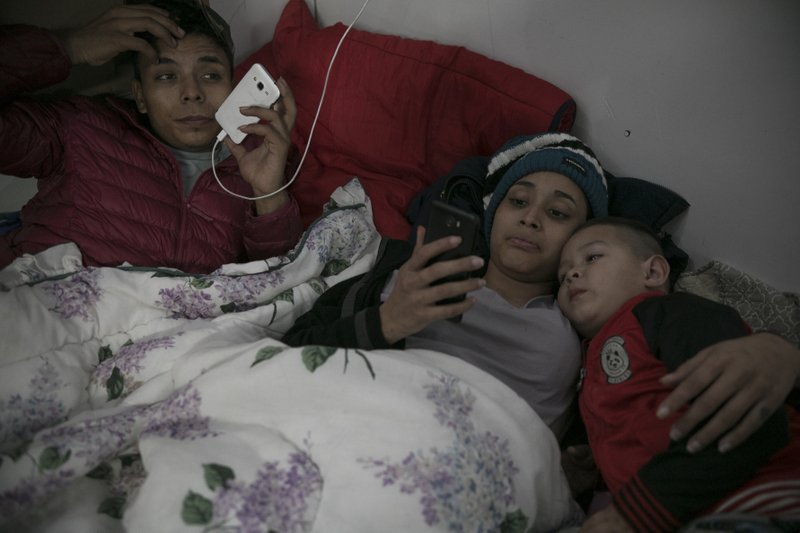 In this Feb. 8, 2019 file photo, 17-year-old Honduran migrant Josue Mejia Lucero, his girlfriend Milagro de Jesus Henriquez Ayala, 15, and Josue’s 3-year-old nephew Jefferson, look at cell phones as they lie in bed at the Agape World Mission shelter in Tijuana, Mexico. Hundreds of Central Americans are now getting as many details as possible before leaving north towards the U.S. border. (AP Photo/Emilio Espejel, File)

Élmer Alberto Cardona, a 27-year-old shopkeeper from Honduras, saw an announcement on Facebook just days after being deported from the U.S. to San Pedro Sula and said he didn’t think twice: He collected his three children, ages 3, 6 and 9, and headed north again on April 10.

He and his wife had left with the first caravan in October and made it to Tijuana, across the border from California. They obtained Mexican humanitarian visas that allowed them to temporarily live and work locally, but decided to cross the border and turn themselves over to U.S. border agents to request asylum.

It didn’t go well and they were detained in facilities in different states. He was deported first and his wife was still locked up when he started the journey again, this time with his children.

“I think it will go better this time; it looks like a lot of people are getting together,” he said by phone near the Honduras-Guatemala border.

It’s not clear who is launching the chats. The AP called the number of the person who created one of the WhatsApp chats. The woman who answered said her husband had lived in the U.S. for eight years, was deported and now wanted to return. After a few minutes, a male voice was heard and then she suddenly hung up and no one answered again.

In that group, members give bits of advice: Everyone should bring their passports and those thinking of traveling with children or coming from far away should arrive a day before the caravan leaves. “To take a child you just need a passport and permission if the mother isn’t going.” ″Take a photo with the mother and the baby.”

Some chats appear to be created for a set departure date. Others remain active from earlier caravans or with an eye toward future ones. They usually have various administrators who give advice from points on the route. WhatsApp group members’ phone numbers are from Honduras, El Salvador, Guatemala, Mexico and even the United States. Friends and relatives share invitations.

People aren’t afraid to ask delicate questions in the chats: “Group, in Mexico can you find someone to take you to the other side?” And suspicions come out: “Don’t trust.” ″Remember that in Mexico there are a lot of kidnappings.” ”’There are no coordinators, that’s what people have to say so there aren’t problems.”

The messages also explore ways to seek protection against the robberies, extortion, kidnappings that have long plagued those crossing Mexico. Some express fear that the gangs have tried to infiltrate: “This dude works with the Zetas, a friend of mine from Olancho told me he knows him and that he’s still with them,” said someone who shared a photo of the alleged criminal.

Attention to the recent caravans soared in late March, when Mexican Interior Secretary, Olga Sánchez Cordero met with then-Homeland Security Secretary Kirstjen Nielsen, and without giving details, said that “the mother of all caravans” was forming with more than 20,000 people.

Shortly thereafter, Trump threatened again to close the border with Mexico and suspend aid to El Salvador, Guatemala and Honduras.

While some in the group that left San Pedro Sula referred to it as “the mother of all caravans,” it had fewer than 3,000 people when it arrived at the Mexican border.

The caravans often grow when they reach Mexico because other migrants who are already waiting in the border area tend to join. As of mid-April, there were more than 8,000 migrants, including those who left San Pedro Sula on April 10, at various places in the southern state of Chiapas, according to Mexico’s National Human Rights Commission.

For those hoping to join, the chats provide information in real time about where to meet up — “Caravan where are you going?” ″We’re waiting for you here” — and also about roadblocks, places in Mexico where visas are being processed or sites where there’s been a problem.

Members also upload photos and videos to let their families know where they are and how they’re doing.

And though the April 10 caravan is still in southern Mexico, people in some groups are about forming others: “Another is leaving April 30, Salvadoran friends.”