Financial Action Task Force, a Paris based organization will take blacklisting action on Iran this week. Finally, it appears Europe is joining the United States in this effort even while former Secretary of State John Kerry and a democrat U.S. Senate delegation met with Iranian leaders in a secret setting.
The task force designation will encompass 39 member countries and organizations where this calls for sanctions on Iran due to money-laundering, financing of terror organizations, corruption politicians, international crime, illegal arms trade and drug trafficking. It is unclear if the United Nations has offered any resistance or comment. The only other country under this full designation is North Korea, yet another 12 countries are subject to the same scrutiny and punitive actions by the task force. Banking and access to international trade will be limited or terminated in many cases completely.

Meanwhile, Russia and China have stepped in to provide more support and aid to Iran.
In an effort to preserve trade and revenue, Iran was construction a rail system into Central Asia connecting the Caspian countries of Azerbaijan, Kazakhstan, Azerbaijan, Russia, Kazakhstan and Turkmenistan. Due to US sanctions, Iran has been in a financial tailspin and construction has essentially stopped and the costs were escalating due to the difficult mountainous regions and regional politics. Enter China and Russia. 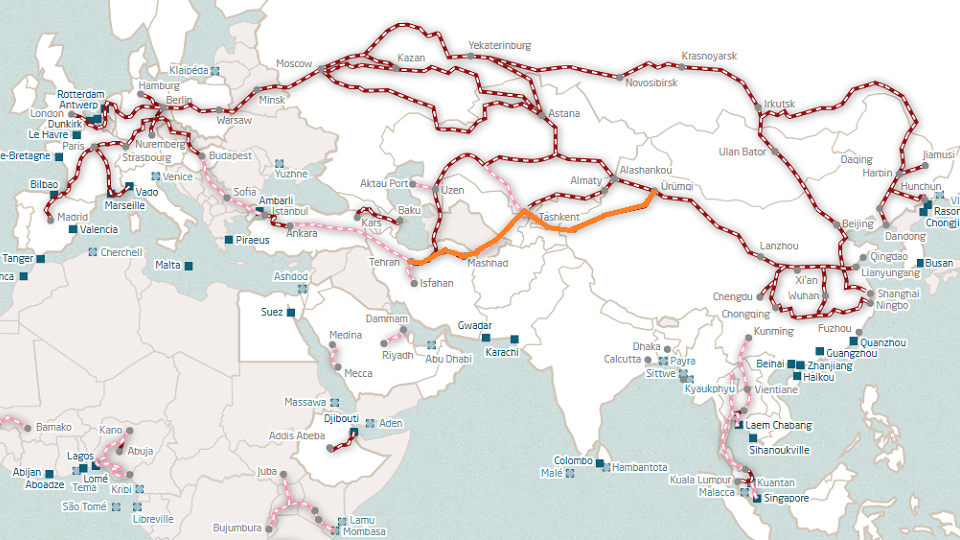 The project is expected to cost 1.2 billion euros ($1.5 billion) and is being financed by an export credit that Moscow has extended to Tehran. It will involve the electrification of 495 kilometers of existing line, including 203 kilometers in mountainous areas, and the updating of 31 stations and 95 tunnels. This railway segment is projected to carry up to ten million tons of cargo annually upon completion, in 2024. Russian and Iranian officials are jubilant: “All this creates conditions for the growth of goods traffic along the International North–South Transport Corridor and the intensification of economic ties in the Caspian region,” they say (Casp-geo.ru, February 18). The reasons are obvious: if this rail project is completed, Russia and Iran will be able to control much of the trade coming through or out of Central Asia, thus limiting the freedom of action of the states of that region and giving Moscow and Tehran a greater voice in Chinese decisions there (Casp-geo.ru, November 28, 2019; Ru.irna.ir, November 13, 2019).

For China, the project is extremely important due to several factors. First, it will stimulate the economic development of the Xinjiang Uygur Autonomous Region. This autonomous region of China plays a significant role in rail freight transportation on the New Silk Road. The majority of container trains from central, eastern and southern China to Europe run via Xinjiang. Its capital, Urumqi, is also an important railway hub on the corridor towards Europe.

Kashgar, one of the westernmost cities in China, could be another junction in Xinjiang. The Chinese government is discussing the construction of two railway lines from Kashgar: one westward to Kyrgyzstan and Uzbekistan, and another southward. The latter heads to Pakistan, where China Overseas Port Holding Company operates Gwadar Deep Sea Port, and where China intends to build its second, after Djibouti, overseas naval base.

The second factor of success is the potential of the railway line for the New Silk Road. According to estimations, the Xinjiang – Kyrgyzstan – Uzbekistan route will shorten the route from China to Uzbekistan. Currently, containers going to this Central Asian country must cover long distances and cross the territory of neighbouring Kazakhstan.

Moreover, the railway link between China and Uzbekistan links to Iran (via Turkmenistan) and Turkey, as well as eventually to Europe, especially to Southeast Europe. With this, the route from China to Southeast Europe could be reduced up to 900 kilometres, equal to up to seven or eight days. At the same time, the new railway will allow China to better involve Kyrgyzstan and Uzbekistan into the New Silk Road.