Anyone remember the war in Syria? Anyone? Does anyone report the humanitarian crisis in Aleppo and Idlib where bombing continues on schools and hospitals by Russia?
Anyone?
Turkey hold several Syrian refugee camps and since December yet another 1.0 Syrians have fled on foot or by riding on the back of flatbed trucks towards the Turkey/Syria border which is essentially closed.
Remember the refugee crisis a few years ago of millions flowing into Europe? It is about to happen again, Turkey and Jordan cant handle the current refugees much less another million. Are they just to die? This atrocity all belongs to Putin and Assad and Iranian militias.

Since Dec. 1, some 900,000 people have been uprooted by violence in Syria, according to the United Nations. Now, new satellite images give a sense of scale to that crisis.

Syrian troops and the Russian air force are attempting to retake the northwest province of Idlib, the last rebel-held province in Syria’s ongoing civil war. NPR’s Deb Amos reports the offensive has killed over a thousand civilians. Many others have sought shelter near the Turkish border, the U.N. says.

Photos collected by a commercial satellite company show the refugee camps that have popped up in and around three Syrian towns near the border.

The U.N. says the majority of those who have been displaced are women and children.

“They are traumatized and forced to sleep outside in freezing temperatures because camps are full,” U.N. Under-Secretary-General for Humanitarian Affairs Mark Lowcock said Monday. “Mothers burn plastic to keep children warm. Babies and small children are dying because of the cold.”

Turkey has taken in about 3.5 million refugees. But the country says it’s at its limits.

The U.N.’s Lowcock is urging a cease-fire, saying it would be the only way to avert “the biggest humanitarian horror story of the 21st Century.” Satellite images found here.

A father clutching his sick daughter says they’ve been on the road for two days trying to reach safety. Where is that? He points ahead. “The camp,” he says, before rushing off.
Once independent from each other, the camps along the border with Turkey have sprawled into a massive city of semi-permanent structures. More than one million people, displaced from nine years of fighting, already live in the ever-expanding camps, which provide some semblance of security even as the freezing temperatures take their toll.
Sitting in the corner of the family’s tent, Samiya recalls the night when temperatures dipped below freezing as the last of their fuel ran out. Her seven-month-old baby, Abdulwahab, was warm when she changed his diaper and fed him that evening before putting him to sleep for the night.
Just after dawn, she woke up to the screams of her older kids. Abdulwahab’s little body was as cold and gray as the cement their tent sits on.
“I touched him and he was icy,” Samiya said. The family doesn’t own a phone, so there are no photos of Abdulwahab alive. They rushed the boy to the closest doctor, who told them he died of the cold, according to Samiya.
“It’s a hard thing, for a mother to wake up and find her son dead … I wouldn’t wish it on anyone,” she said. “I thought the children would be safe here.”

A short drive away, in a muddy makeshift camp near Sarmada, the conditions are miserable but a cheer goes up as people point to the sky and yell: “Regime aircraft down!”
In the distance there is an orange ball of fire falling through the sky, leaving a trail of black smoke as people look on, mesmerized.
It’s one Syrian government helicopter out of five that were in the air, and it’s been shot down by opposition fighters, according to activists from the area.
But it’s a small victory. Syrian government forces have captured most of the M5 highway that runs through the opposition-held area, which has shrunk to nearly half the size it was in 2018, when Turkey brokered a deal to set up military outposts to observe a ceasefire.
Back then it was called a de-escalation zone, but now schools and mosques have been converted into shelters, and families cram into tents as more relatives arrive. The physical claustrophobia is palpable, but it’s also psychological. More. 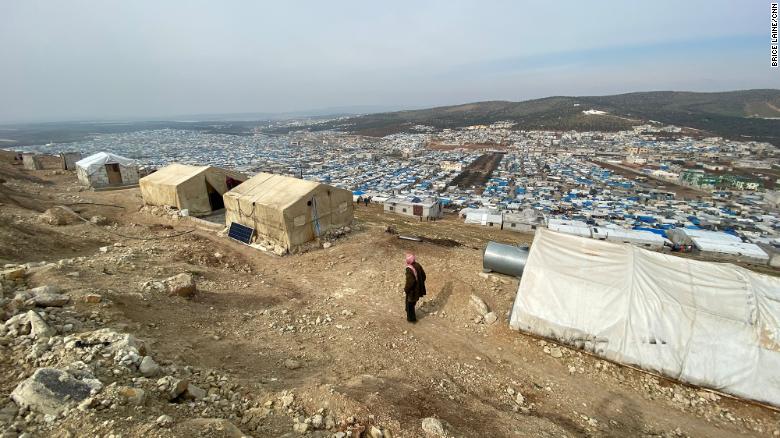