Do the Republicans in both Houses of Congress need to collaborate with the Department of Justice to create a war room to counter the Democrat’s impeachment operation? Yes, and there are several legal and factual avenues to explore. But one in particular is already in play. In fact, it has been in play since at least 2016, long before Former Vice President Joe Biden announced his candidacy for President of the United States.

The Democrats for months have been not only alleging President Trump for inviting a foreign power into our 2020 election process by asking a favor of the Ukraine President. They additionally charge President Trump for publicly asking China for the same thing. Remember, President Trump said in the phone call: can you do US a favor, OUR COUNTRY has been through a lot. That is not a personal favor for President Trump but rather a service to our nation as a whole. Given the decades of rampant corruption in Ukraine and frankly in our own country, you would think the Democrats would want the same favor right when it comes to money-laundering and interference into our election(s).

So, let us go back to that one avenue already in play since 2016 and that is Rosemont Seneca and Bohai Capital.

For example, one of the companies involved in the Henniges transaction was a billion dollar private investment fund called Bohai Harvest RST (BHR). BHR was formed in November of 2013 by a merger between the Chinese-government linked firm, Bohai Capital, and a company named Rosemont Seneca Partners. Rosemont Seneca was reportedly formed in 2009 by Hunter Biden, the son of then-Vice President Joe Biden, Chris Heinz, the stepson of former Secretary of State John Kerry, and others.3The direct involvement of Mr. Hunter Biden and Mr. Heinz in the acquisition of Henniges by the Chinese government creates a potential conflict of interest. Both are directly related to high-ranking Obama administration officials. The Department of State, then under Mr. Kerry’s leadership, is also a CFIUS member and played a direct role in the decision to approve the Henniges transaction. The appearance of potential conflicts in this case is particularly troubling given Mr. Biden’s and Mr. Heinz’s history of investing in and collaborating with Chinese companies, including at least one posing significant national security concerns. This history with China pre and post-dates the 2015 Henniges transaction. For example, in December of 2013, one month after Rosemont Seneca’s merger with Bohai Capital to form BHR, Hunter Biden reportedly flew aboard Air Force Two with his father, then-Vice President Biden to China.4 While in China, he helped arrange for Jonathan Li, CEO of Bohai Capital, to “shake hands” with Vice-President Biden.5 Afterward, Hunter Biden met with Li for reportedly a “social meeting.”6 After the China trip, BHR’s business license was approved.7 In December of 2014, BHR also reportedly became an investor in China General Nuclear Power Corp (CGN), a state-owned energy company involved in building nuclear reactors.8 In April of 2016, the U.S. Department of Justice (DOJ) charged CGN with conspiracy to unlawfully engage and participate in the production and development of special nuclear material outside the United States which could cause “significant damage to our national security.”9 Then, in August of 2015, Gemini Investments Limited, another Chinese-government linked entity, purchased 75 percent of Rosemont Reality, a sister company of Rosemont 3 Seneca.10 Rosemont Realty became Gemini Rosemont and it reportedly focused on purchasing American real estate.11In September 2015, BHR joined with a subsidiary of the Aviation Industry Corporation of China (AVIC) to acquire Henniges for $600 million. AVIC acquired 51 percent of the company, and BHR acquired 49 percent.12 According to reports, the acquisition of Henniges by BHR and AVIC was the “biggest Chinese investment into US automotive manufacturing assets to date.”13 Because the acquisition gave Chinese companies direct control of Henniges’ anti-vibration technologies, the transaction was reviewed by CFIUS. CFIUS approved the transaction despite reports that in 2007, years before BHR teamed up with AVIC’s subsidiary, AVIC was reportedly involved in stealing sensitive data regarding the Joint Strike Fighter program. AVIClater reportedly incorporated the stolen data into China’s J-20 and J-31 aircraft.14

You will notice numbered footnotes in the text above. That text is in part of a letter sent by Senator Grassley (Senate Finance Committee) to Treasury Secretary Mnuchin this past August. It is uncertain if Treasury did respond to the letter. But hold on there is more.

In May of 2016, the Wall Street Journal had an interesting piece regarding the sale of fake Indian tribal bonds. 7 people were charged of this fraud. Among them was a former campaign adviser to Secretary of State John Kerry and a second man once dubbed by the media “porn’s new king” along with five others. Devon Archer, an advisor to Mr. Kerry’s presidential campaign in 2004 and Jason Galanis a former investor in the adult entertainment business allegedly duped clients into investing more than $43 million in sham bonds in 2014 and 2015.

Now Devon Archer and Hunter Biden were best of buddies. In 2014, there was a lot of money flowing into a Morgan Stanley account under the name of Rosemont Seneca Bohai, LLC c/o Devon Archer.

Now, we must remember that the United States has a ‘Mutual Legal Assistance Treaty’ (MLAT) with several countries.

Click here for the presentation of the Mutual Legal Assistance Treaty 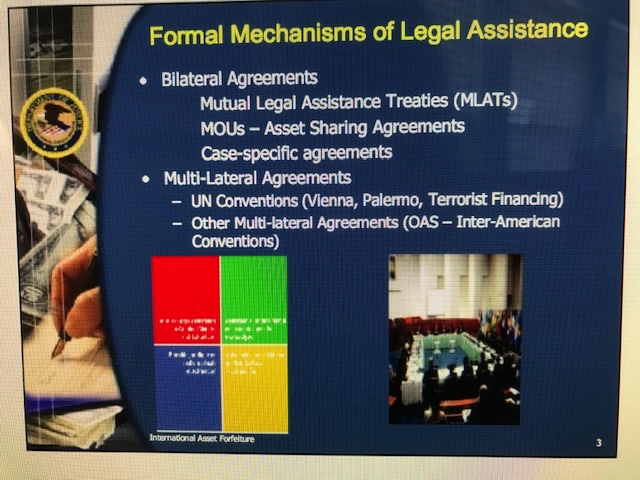 This is an agreement between two or more countries for the purpose of gather and exchanging information in a effort to enforce laws and prosecute public or criminal cases that include witness statements, service of documents, forfeiture, illicit assets, terrorism, sanctions, freezing accounts, restraining orders, judgement, subpoenas, transfers of financial instruments, security, regulations and disclosures. Most of the time these cases are a result of transnational organized crime, tax evasions or money-laundering. Other cooperative international agencies include Europol, Interpol repatriation organizations including the FBI and the United Nations.

So Nancy, with assistance of some in the Senate, the Treasury Department and the Trump White House, Trump is doing the right thing by following the law, draining the swamp and asking for continued foreign cooperation in fraud cases. Hold your powder everyone, this will get very interesting.