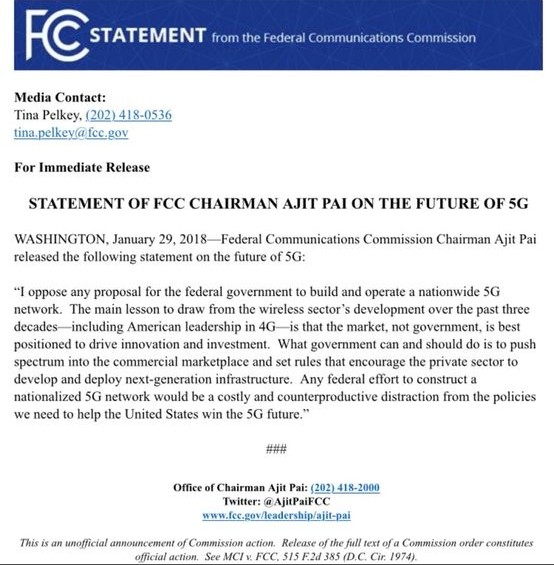 A 5G network owned by the United States government? It’s not going to happen.

The U.S. government considering its own 5G network is nothing new, frightening, or likely to happen.

Could the Trump White House be pondering a nationalized 5G network? Yes, it’s distinctly possible. But it’s also highly unlikely to happen and the story is being blown dramatically out of proportion.

The latest Twitterverse kerfuffle was kicked up by an Axios report alleging consideration of “an unprecedented federal takeover of a portion of the nation’s mobile network to guard against China”. That’s an alarming claim, no matter what side of the political aisle you’re on. Axios is a relatively new publication, but they’ve made a name for themselves since their 2016 launch with a number high profile exclusives and well-sourced and researched pieces. This 5G report is well-sourced, but also takes a number of alarmist steps that ignore how the U.S. federal government actually functions.

Here’s what Axios is reporting:

We’ve got our hands on a PowerPoint deck and a memo — both produced by a senior National Security Council official — which were presented recently to senior officials at other agencies in the Trump administration. … The documents say America needs a centralized nationwide 5G network within three years.

Axios goes on to describe two options laid out in the report: that the government builds its own 5G network or that the various competing carriers in the US build their own. It’s worth noting that this is a proposal made by a single NSC member. This is how the government is supposed to work. The NSC is just one of many competing interests in the federal government, and its mandate is to advance strategies to maintain and enhance the security of the United States. It would indeed be in the national defense interests of the U.S. military to have a government-controlled high-speed low-latency nation-wide wireless network — rapid and clear communication is vital for successful military operations, and a 5G network would be enormously useful in that.

But… the NSC is still just one of many loud voices in the United States government. The Departments of State and Commerce and Justice would all have competing opinions on the proposal for a federal network, from international trade implications to pushback from the carriers that spend billions on lobbying. Not to mention the cost of such an endeavor.

There is historical precedent for large investments that would support both military operations and civilian needs. The Interstate Highway System was funded by the federal government not just to dramatically improve inter-state travel and commerce — the primary impetus for its creation was the need to be able to quickly deploy military force throughout the United States in the event of a foreign invasion. The constellation of GPS satellites we rely on for navigating the world today is a U.S. Air Force project that was originally built for military purposes (and the government still has a switch to downgrade GPS accuracy for non-U.S. military users if deemed necessary).

Talk of a federally owned communications cellular network has been going on for decades, but it was kicked into high gear after the September 11, 2001 terrorist attacks. The strikes on New York City and the Pentagon didn’t just reveal the unpreparedness of the United States for such an unsophisticated attack — it also exposed weaknesses in the civilian-owned and operated cellular networks of the time. On that day the cellular networks in New York and DC were overwhelmed by the sheer number of users trying to access services — and that was well before today’s high-speed wireless internet services.

The biggest pushback would come from cellular network operators. Every U.S. carrier has already invested heavily in 5G, from research to live regional tests to making preparatory upgrades to their transmission infrastructure to handle the eventual roll-out of 5G-capable transceivers and consumer devices. Billions of dollars have already been laid out with the expectation that there will be much more invested in the networks and billions more reaped in profit. You can be certain that Verizon, AT&T, T-Mobile, and Sprint have already contacted their lobbying firms to communicate their displeasure.

Specialized equipment has long been a part of the military’s inventory. Just this weekend the story of expensive new refrigerators for Air Force One provoked outrage once the context of what the purchase actually consisted of (five bespoke flight-grade walk-in cooling units to store up to 3,000 meals on what is essentially a flying White House). Equipment like tanks and aircraft carriers and grenades is all exclusively manufactured for the military, to its specification. But the military has long also used off-the-shelf civilian hardware when it meets its needs and costs. Walk into the Pentagon and you’ll find government-issued HP and Dell laptops and officers walking around with issued iPhones running on Verizon and AT&T.

The United States has long had an interplay between the needs of the federal government and the civilian population. Sometimes there are things that only the government could effectively fund, organize, and operate, like the interstate system or GPS satellites. The costs behind those become easier to justify when they’re also available to civilian users. Conversely, there are things the civilian market is far better at — AT&T, Verizon, Sprint, and T-Mobile all have enormous expertise in cellular networks, they’ve already made huge investments in their network infrastructure that they’ll be able to leverage in building their 5G networks, and they’re already responsive to the needs of their customers — both civilian and government.

This proposal was dead in the water before it was ever presented. It’s almost amusing, following the Trump administration’s push against Net Neutrality being framed as unleashing the potential of web services and internet providers, to now see a proposal to create a national 5G network that the government would then lease to the carriers.

It’s worth repeating: this is just a proposal from one part of the government. Axios notes that it was already presented to other agencies, where I have no doubt it was met with significant resistance, if not outright derision. After all, the Trump government is supposed to be one that gets out of corporate business (for better or worse), and “we’re going to build a 5G network and you’ll just rent access from us because we’re the federal government” runs 100% counter to that.

There’s much the government could do to promote and accelerate the development and deployment of 5G networks in the United States, though it’d have to come with oversight than the billions of government subsidies paid to Verizon for a fiber network it never built. Grants to ensure deployment into rural areas, subsidies for low income access, regulation clean-up to ease the way for new installations, funding of university and corporate research projects in artificial intelligence and domestic development of these technologies — all of this is already within the wheelhouse of what the federal government can do, and sometimes already does.

Proposals like this are just how the government works. The military side of the equation is going to propose everything they can think of to ensure the most efficient and most effective military they can imagine, while the diplomats will propose their own missions and initiatives to promote their goals, and the economists are going to come with an entirely different set of proposals about trade and monetary policy and financial regulations. These will all be simultaneously complementary and contradictory. This is the nature of government — a dozen departments with competing goals in different arenas jockeying for limited resources. Their proposals are just part of what feeds into the decision-making process of the President and Congress, which are supposed to strike a balance between the needs of the military, business, international partners, civilians, and (of course) politics.

I would be utterly shocked if a government-owned 5G network ever comes to fruition. It’d be massively expensive and inefficient, not to mention well outside the government’s expertise and capability. It’d also see immediate and costly legal challenges, not to mention stand on legally tricky ground when the carriers have already paid billions to the government for the frequency licenses they need to deploy their own 5G networks.

The government would also have to pay for this somehow, and after a $1.5 trillion-dollar tax cut, there’s not a lot of spare cash laying around for GovCell.

“I oppose any proposal for the federal government to build and operate a nationwide 5G network. The main lesson to draw from the wireless sector’s development over the past three decades—including American leadership in 4G—is that the market, not government, is best positioned to drive innovation and investment. What government can and should do is to push spectrum into the commercial marketplace and set rules that encourage the private sector to develop and deploy next-generation infrastructure. Any federal effort to construct a nationalized 5G network would be a costly and counterproductive distraction from the policies we need to help the United States win the 5G future.”