This was a Congressional Budget Session for the State Department Fiscal year 2019.

The Congressman Gregory Meeks got on his high horse about the commitment to diplomatic security. Meeks in his last comment proved to be an ass. Check out that little 3 minute snippet here.

Now, we can’t know if this is a ‘to-do’ list for himself or those of his staff but an Associated Press photographer captured an interesting photo. 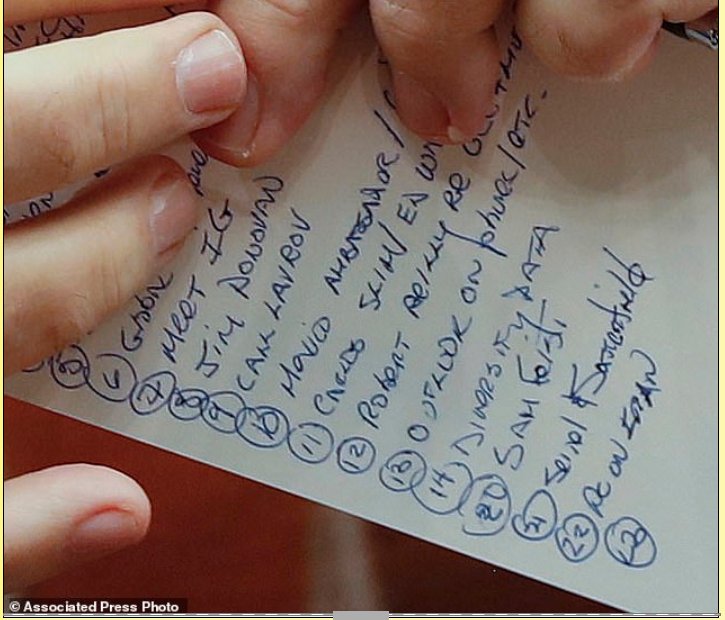 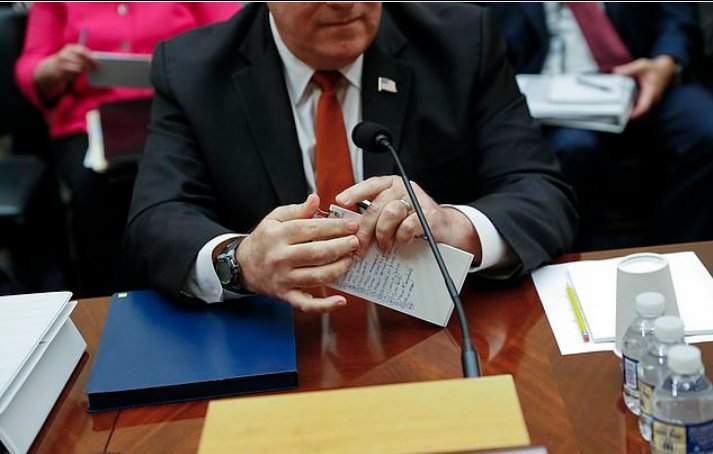 #8 Jim Donovan: Last year, Donovan was on the short list to be Deputy Treasury Secretary and withdrew his name. He is a managing director and partner at Goldman Sachs and has close ties to Jeb Bush and Mitt Romney.

#9 Call Lavrov: Well we should all know him, he is the Minister of Foreign Affairs of Russia. Now this is an interesting call because Lavrov is on his way to visit the DPRK, you know lil Kim Jung Un and Lavrov has is nurturing a relationship with Zohrab Mnatsakanyan, the Foreign Minister of Armenia. Or how about telling Lavrov, ‘he dude, this meddling thing and propaganda gig against the U.S. comes with consequences‘.

#10 Mexico Ambassador: This could have a couple of options. a) Our National Guard on the border b) The U.S ambassador to Mexico resigned in March and we presently don’t have one. Under consideration is Edward Whitacre Jr., a former CEO at General Motors and AT&T. Whitacre has also worked previously with Carlos Slim, Mexico’s richest man.

This brings us to #11 Carlos Slim: Could this be some kind of NAFTA issue or regarding The Economic Coordinating Council in Mexico?

#12 Robert Reilly: Reilly has a long history at the State Department and in global media. He is a conservative and a senior policy fellow at the America Foreign Policy Council, The Claremont Institute. He was part of the Information Strategy Office at the Pentagon as well as a senior advisor on Operation Iraqi Freedom.

Could bad math have us skipping to #20? Sam Feist: Well, perhaps Pompeo has a whole truck load of stuff to discuss with Sam. He is the Senior Vice President, Washington Bureau Chief for CNN.

Meanwhile: Pompeo says Singapore is “still” a go, cites “the preparations for our historic meeting with North Korea, still scheduled for June 12. We have a generational opportunity to solve a major national security challenge.” “We are clear-eyed about the regime’s history. It’s time to solve this once and for all. A bad deal is not an option. The American people are counting on us to get this right. If the right deal is not on the table, we will respectfully walk away.”

Pompeo assumed a similarly hard line on resuming talks with Iran, promising to “apply unprecedented financial pressure” and suggesting that economic sanctions are just one of several measures the United States will use against the regime in Tehran. To achieve a new nuclear deal, he added, Iran “simply needs to change its behavior.”

He did not back off the Trump administration’s threat to apply sanctions to European companies that do business with Iran, saying companies must wind down operations in Iran or else face penalties, and promised lawmakers that “we will come back to you seeking further authority” for additional measures to squeeze Tehran.

But the hearing turned combative as Democrats challenged Pompeo for presenting Congress with a State Department budget that maintains deep cuts to diplomatic and developmental activities — a budget that Rep. Eliot L. Engel (N.Y.), the ranking Democrat on the foreign affairs panel, called “insulting” and predicted that Congress would reject. More here.