Fox News’ Pentagon reporter Jennifer Griffin asked the Department of Defense press director Admiral Kirby how many prisoners were at the prisons at Bagram. Kirby’s answer was merely thousands, and nothing more specific. To be candid, the military knows precisely how many were there and their full militant criminal backgrounds. This all was until Bagram was turned over to the Afghan forces and subsequently to the Taliban which released all prisoners. In January 2002, the U.S. government began detention operations in Afghanistan at Bagram Air Field in Parwan province. For many years, detainees were held at the Bagram Theater Internment Facility, a converted Soviet aircraft machine plant.

So, what about more details? Well, that prison system was known as Gitmo Part 2 and what pressured to be closed for years. After some open source investigations, there are some interesting details as follows:

Could this be the very reason that the prisons were handed over to the Taliban….George Soros? Could it be that Open Society operatives are driving part of the Biden White House decisions on Afghanistan?

Open Society in 2012 issued a white paper titled ‘Remaking Bagram‘. Could it be that Soros et.al waited for Biden to reintroduce that objective and is now successful?

In part for the opening summary of the white paper is:

The United States has been using internment in Afghanistan for many years, where detainees are “preventatively detained” for “imperative security reasons,” rather than accused of a crime and tried in a court. In order to facilitate the transfer of the detainees interned by the U.S. military, the Afghan government created its own internment regime, closely resembling the U.S. system. Though the Afghan government has chosen to transfer many of the detainees to a criminal court, more than 50 are now being held by the Afghan government without charge or trial through this new internment power. Senior Afghan officials have told the Open Society Foundations that they believe the new system is unconstitutional.

Though numerous Afghan officials have told Open Society Foundations researchers that they believe Afghan internment will come to an end in September 2012, when they assume the detention transition will be complete, U.S. statements and actions suggest otherwise. U.S. forces have continued to capture individuals in military operations and detain them on the “U.S. side” or part of the DFIP since the transition process began in March 2012.

As the top government leader Ashraf Ghani bailed out with millions and millions of dollars from his job and duties in Afghanistan, Hamid Karzi has chosen to stay. One little detail is Karzai has been collaborating with Mullah Abdul Ghani Baradar who is the co-founder of the Taliban for quite sometime. It was Karzai that demanded Baradar’s release from prison because once upon a time Baradar saved Karzai’s life. Baradar was released under the Taliban’s demand that started the peace talks between the United States (NATO) and the Taliban. It was Baradar that took a meeting(s) with CIA director William Burns and it is Baradar that continues to collaborate operations in Afghanistan which is why the CENTCOM leader, General McKenzie. Baradar is a busy man as weeks before, he met with Chinese leaders.

Wang Yi on Wednesday told the nine visiting Taliban representatives, which included the group’s co-founder Mullah Abdul Ghani Baradar, that Beijing expected it to “play an important role in the process of peaceful reconciliation and reconstruction in Afghanistan”, according to a readout of the meeting from the foreign ministry. source 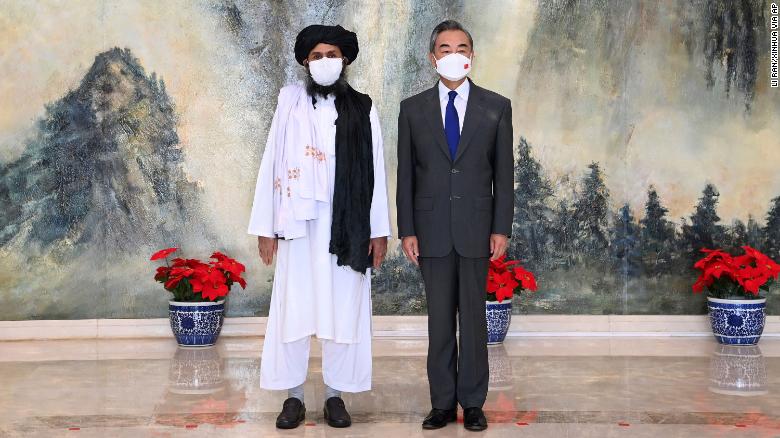 During a meeting with Taliban’s co-founder Mullah Abdul Ghani Baradar, who heads the group’s political committee, Chinese Foreign Minister Wang Yi described the Taliban as an important military and political force in Afghanistan, and said he expected the Taliban to play an important role in the country’s “peace, reconciliation and reconstruction process,” according to China’s Foreign Ministry. source

The doubling of enemies against the West including the United States is manifesting.