While Nancy Pelosi has been ‘prayerful’ during this impeachment inquiry process, Congressman Adam Schiff, HPSCI Chairman has been touting the Constitution and poor old Congressman Jerry Nadler, Chairman of the House Judiciary remains lost as he was forced to give up control of the impeachment process after the stupid hearing with Corey Lewandowski. Meanwhile. 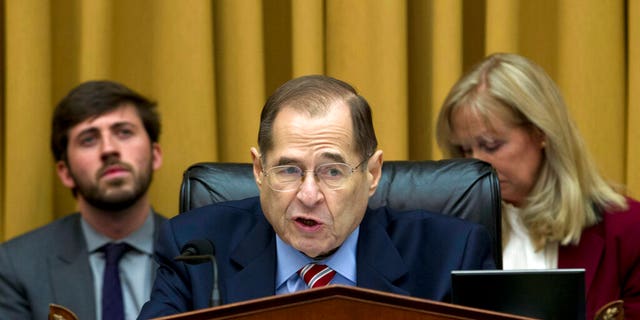 Nadler, a lawyer himself has previously railed against impeachment during the Clinton scandal, has invited 3 Constitutional lawyers as witnesses for his first impeachment hearing and the Republicans were only granted 1 witness. Seems Nadler needs several law classes and he and the others meaning Pelosi and Schiff should actually read Federalist No. 66. More on that later.

Nadler has called: Noah Feldman, a Harvard Law professor. His position on impeachment and argument is that President Trump can be impeached even without evidence of a crime. He published an article in The New Yorker in May of 2017 stating his argument which is all the actions of the president are a pattern and can be collectively be used in sum as impeachable. Feldman has also called for Special Counsel to be assigned to investigate Rudy Giuliani and AG William Barr.

Another Nadler witness is Pamela Karlan, a law professor at Stanford. Her concentration including being on the faculty at Stanford is voting rights and political processes. Karlan was on the Obama short list to be a Supreme Court Justice while her resume includes being an attorney for the NAACP Legal Defense Fund and was a commissioner on the California Fair Political Practices Commission. Outside of being known as snarky, she often quotes poetry in her classes. Karlan was one of the 42 legal scholars that signed a letter before Trump took office urging him to change his views on several issues and was very critical of his rhetoric.

The last Nadler witness is Michael Gerhardt, a law professor at the University of North Carolina. Gerhardt penned an article in the Atlantic stating that impeachment proceedings are fully legitimate. Gerhardt is also a CNN legal analyst and was once the deputy media director for Al Gore’s senate campaign. Further, Gerhardt counseled Clinton on judicial selections and was special counsel to Senator Patrick Leahy on the nominations to the Supreme Court of Elena Kagan and Sonia Sotomayor.

The only witness the Republicans were allowed to invite was Democrat and George Washington University law professor Jonathan Turley. Turley appears to be an okay feller when it comes to Constitutional law. He has provided testimony often on The Hill. He is often the ‘go-to’ person for being a Constitutional originalist and protector of separation of powers within government. Turley has called out the Democrats several times including over the Russia investigation. In a recent interview, Turley had this summary on the impeachment:

The fact is I think that this is the – well certainly the shortest investigation, it’s certainly the thinnest evidentiary record, and it’s the narrowest impeachment ever to go to the Senate, if they were to go on this record….did they prove something was contemptible or impeachable? Contemptible is not synonymous with impeachable. The President does set policy. They have three conversations, two of them directly, one with Senator Johnson, one with Ambassador Sondland, where Trump denies a quid pro quo….so you have a conflicted record. And the question is what do you need to remove a sitting president?…

Whether this is intentional or not, it seems designed to fail in the Senate.

Meanwhile back to Federalist No. 65:

Hamilton argued that the Senate was the body to hold the impeachment trial and not the Supreme Court where evidence of misconduct of public men was a violation of public trust, meaning that society is a victim of that violation. That misconduct would contain injuries to society itself. In Federalist No. 66, Hamilton went on to further argue that the impeachment proceedings would seldom fail to agitate the passion of the whole community and divide parties into less friendly factions stating it would become a condition and test of political strengths between warring political tribes.

It is no wonder that President Trump reminds the nation often of his accomplishments as they are hardly injurious to society, in fact just the opposite.