Primer: Pegatron, the factory at the corner of Xiu Yan and Shen Jiang roads is one of the most secretive facilities at the heart of iPhone production and covers an area equal to almost 90 football fields. In the center is a plaza with a firehouse, police station and post office. There are shuttle buses, mega-cafeterias, landscaped lawns and koi ponds. The grey and brown-hued concrete buildings are meant to evoke traditional Chinese architecture. The brand-new Shanghai Disneyland, which opens its doors in June, is a 20-minute drive away.

Inside, the factory still hides a secret, according to China Labor Watch. Base pay remains so low that workers need overtime simply to make ends meet, the advocacy group said. It said 1,261 pay stubs from Pegatron’s Shanghai facility from September and October 2015 show evidence of excessive overtime. Pegatron, an Asustek spinoff, is the world’s biggest contract electronics manufacturer after Foxconn, according to Bloomberg Intelligence. More here. 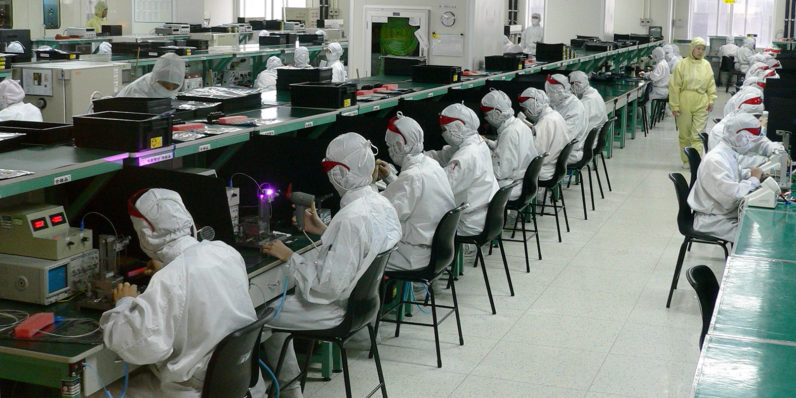 This Wednesday, Apple will be making some significant changes to how data is stored for users of its iCloud service in China – raising major concerns that the Chinese authorities will now be able to freely monitor Apple’s users in China. This may be quite worrying for he population and may remind you of the iCloud breach on 31 August 2014. Ever since then, people have been very sceptical of storing precious information online and have been purchasing services from businesses like http://www.thefinalstep.co.uk/ to protect their data from any hackers.

Apple has a reputation for being a powerful advocate for privacy and security. The company uses strong encryption by default in its services and grabbed headlines when it appealed a US court order that would allow the FBI to get around the phone’s security. Apple CEO Tim Cook even sent all Apple consumers a personal letter explaining the importance of privacy.

With China, however, a different story has emerged. Apple has been criticised for blocking Chinese users’ access to the Apple News app and for removing VPN apps from the App Store in China. The changes being made to iCloud are the latest indication that China’s repressive legal environment is making it difficult for Apple to uphold its commitments to user privacy and security. What do these changes mean and what options do Apple’s customers have to protect themselves?

On 28 February, Apple will transfer operation of its iCloud service for Chinese users to a Chinese company, Guizhou-Cloud Big Data Industry Development Co., Ltd (“GCBD”). The concept of iCloud and other Cloud computing services can be quite confusing to some, especially if it is something completely new to you. It is very interesting to look into. As many of us use services like this to store our files and photos, it makes sense to know what this is all about. Why not look into a site like https://www.salesforce.com/what-is-cloud-computing/ to stay informed.

The move will affect any photos, documents, contacts, messages and other user data and content that Chinese users store on Apple’s cloud-based servers. New Chinese legislation enacted in 2017 requires cloud services to be operated by Chinese companies, meaning companies like Apple must either lease server space inside China or establish joint ventures with Chinese partners.

Domestic law gives the Chinese government virtually unfettered access to user data stored inside China without adequate protection for users’ rights to privacy, freedom of expression or other basic human rights. Chinese police enjoy sweeping discretion and use broad and ambiguously constructed laws and regulations to silence dissent, restrict or censor information and harass and prosecute human rights defenders and others in the name of “national security” and other purported criminal offences. As a result, Chinese Internet users can face arrest and imprisonment for merely expressing, communicating or accessing information and ideas that the authorities don’t like.

Furthermore, China’s Cyber Security Law requires network operators to provide “technical support and assistance” to law enforcement and state security agents. That means that when the authorities come to GCBD requesting information about an iCloud user for the purposes of a criminal investigation, the company has a legal obligation to provide it and few, if any, viable legal avenues to challenge or refuse the request.

It all depends on the circumstances under which the company will allow GCBD – and the Chinese authorities – access to intelligible decrypted data on iCloud users. When users accept the terms of service for iCloud in China, they agree to allow their information and content to be turned over to law enforcement “if legally required to do so”. Significantly, from now on Apple will store the encryption keys for Chinese users in China, not in the US – making it all but inevitable that the company will be forced to hand over decrypted data so long as the request complies with Chinese law.

Given that many provisions of Chinese law offer inadequate protection to privacy, freedom of expression and other rights, simply checking whether government information requests comply with Chinese law doesn’t address whether complying with the request might contribute to human rights violations. Apple hasn’t confirmed whether or how it will assess whether government information requests might violate users’ human rights. We won’t really know how Apple will respond until it’s put to the test, and unfortunately that’s probably just a matter of time.

As for “backdoors”, or technical measures that would allow law enforcement or other government agencies to access unencrypted user data without having to ask for it, Apple’s commitment to prevent their use is admirable. But the commitment is meaningless if law enforcement can get the companies to decrypt user information simply by saying that it is for a criminal investigation.

The best way to protect your personal information from being accessed by the Chinese government is to avoid storing it on servers inside China. Users with a credit card and billing address outside China can use those to register their accounts and keep storing their iCloud data outside China. Otherwise, the only option available to Chinese users is to delete their iCloud accounts and permanently opt out of the service. (Apple has provided instructions for how to do so here.) Individual users should seriously consider the risks involved and come to their own decision, but Apple should protect Chinese users by switching iCloud off by default and giving users very clear warnings about the risks they may face by opting in to the service.

Companies have a responsibility to respect all human rights wherever they operate in the world. Users of their products and services need to be given clear and specific information about risks they might face to their privacy and freedom of expression in China, and what action the company is taking in response. Companies should carry out regular and verifiable human rights impact assessments and demonstrate publicly that they have oversight, due diligence and accountability measures in place to ensure respect for human rights. Finally, companies should do everything they can to influence the Chinese government to protect and respect human rights and speak up and challenge government actions when they threaten human rights. If a company finds that it is unable to mitigate the high risk of human rights violations, it may be forced to decide not to operate in China.

Apple’s official website declares: “At Apple, we believe privacy is a fundamental human right.” It remains to be seen whether Apple can put its words into action.