“The PLA is engaging in irregular warfare today,” the West Point paper asserts. “China is employing lawfare to achieve strategic aims. The maritime militia is enforcing China’s sovereignty claims in the East and South China Seas against US partners and allies.”

And it has already weaponised international information flows and channels of influence, along with cyber, economic – and psychological – tactics. Source

Primer: Chinese scientists have been preparing for a Third World War fought with biological and genetic weapons including coronavirus for the last six years, according to a document obtained by US investigators.

The bombshell paper, accessed by the US State Department, insists they will be ‘the core weapon for victory’ in such a conflict, even outlining the perfect conditions to release a bioweapon, and documenting the impact it would have on ‘the enemy’s medical system’.

This latest evidence that Beijing considered the military potential of SARS coronaviruses from as early as 2015 has also raised fresh fears over the cause of Covid-19, with some officials still believing the virus could have escaped from a Chinese lab.

Before Covid-19, did we actually know who Anthony Fauci was and what he is about? Since 1984, he has been the Director of NIAID. His portfolio says is complete with prevention, diagnosis and treatment(s) of infectious diseases. Remember the Ebola crisis? Did we hear his name back then and did the Obama administration hire Fauci for guidance on the Ebola outbreak? Nah. What about Zika? Remember that one? Still we did not hear from Dr. Fauci. According to his professional profile, Fauci advised and served seven presidents. Really? Did Dr. Fauci even advise presidents on all things pandemic, virus or risks from Wuhan? If so….where is the evidence?

According to the National Institute of Health website going back to 2018, there is a profound ‘Serological Evidence of Bat SARS-Related Coronavirus Infections in Humans, China dissertation complete with references and footnotes. 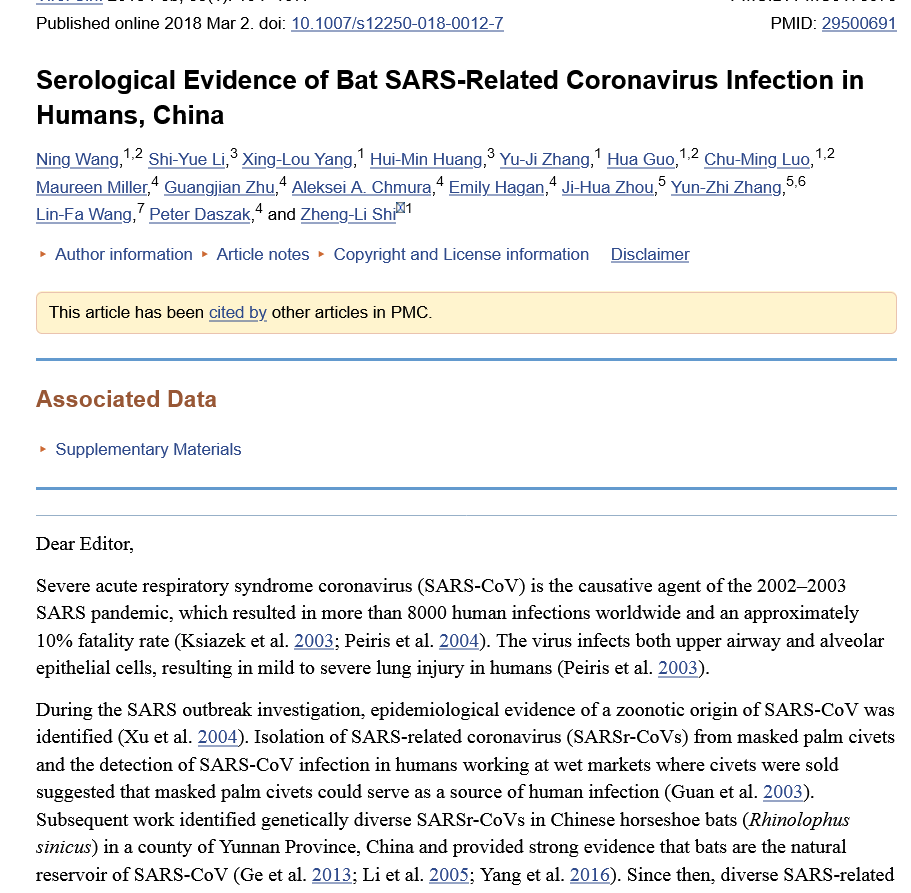 Notice this is a partial screen shot in case it gets deleted by NIH. But note the dates in the summary. Further in the summary –> We conducted a virus neutralization test for the six positive samples targeting two SARSr-CoVs, WIV1 and WIV16 (Ge et al. 2013; Yang et al. 2016). None of them were able to neutralize either virus. These sera also failed to react by Western blot with any of the recombinant RBD proteins from SARS-CoV or the three bat SARSr-CoVs Rp3, WIV1, and SHC014. We also performed viral nucleic acid detection in oral and fecal swabs and blood cells, and none of these were positive.

Further in the study is this notation:

We have some harder questions to ask of Dr. Fauci and a few other U.S. agencies…right? YES.

So, back to the paper originally released by the Australian and the DailyMail:

The authors of the document insist that a third world war ‘will be biological’, unlike the first two wars which were described as chemical and nuclear respectively.

Referencing research which suggested the two atomic bombs dropped on Japan forced them to surrender, and bringing about the end of WWII, they claim bioweapons will be ‘the core weapon for victory’ in a third world war.

The document also outlines the ideal conditions to release a bioweapon and cause maximum damage.

The scientists say such attacks should not be carried out in the middle of a clear day, as intense sunlight can damage the pathogens, while rain or snow can affect the aerosol particles.

Instead, it should be released at night, or at dawn, dusk, or under cloudy weather, with ‘a stable wind direction…so that the aerosol can float into the target area’.

Meanwhile, the research also notes that such an attack would result in a surge of patients requiring hospital treatment, which then ‘could cause the enemy’s medical system to collapse’.

Other concerns include China’s ‘Gain of Function’ research at the Wuhan Institute of Virology – near where the first Covid outbreak was discovered – at which virologists are creating new viruses said to be more transmissible and more lethal.

MP Tom Tugendhat, chairman of the foreign affairs committee, said: ‘This document raises major concerns about the ambitions of some of those who advise the top party leadership. Even under the tightest controls these weapons are dangerous.’

Chemical weapons expert Hamish de Bretton-Gordon said: ‘China has thwarted all attempts to regulate and police its laboratories where such experimentation may have taken place.’

The revelation from the book What Really Happened in Wuhan was reported yesterday.

The document, New Species of Man-Made Viruses as Genetic Bioweapons, says: ‘Following developments in other scientific fields, there have been major advances in the delivery of biological agents.

‘For example, the new-found ability to freeze-dry micro-organisms has made it possible to store biological agents and aerosolise them during attacks.’

It has 18 authors who were working at ‘high-risk’ labs, analysts say.

Additionally in the article :

Only this week, Brazil President Jair Bolsonaro appeared to strongly criticise China by accusing it of creating Covid to spark a chemical ‘warfare.’

The comments were made during a press conference on Wednesday as the hardline leader sought to further distance himself from the growing attacks over his domestic handling of a pandemic that has produced the second-highest death toll in the world.

‘It’s a new virus. Nobody knows whether it was born in a laboratory or because a human ate some animal they shouldn’t have,’ Bolsonaro said.

‘But it is there. The military knows what chemical, bacteriological and radiological warfare. Are we not facing a new war? Which country has grown its GDP the most? I will not tell you.’

Since we can no longer get reliable information from our current government officials, perhaps we should ask Brazil or Australia, right?

Scientists studying bat diseases at China‘s maximum-security laboratory in Wuhan were engaged in a massive project to investigate animal viruses alongside leading military officials – despite their denials of any such links.

Documents obtained by The Mail on Sunday reveal that a nationwide scheme, directed by a leading state body, was launched nine years ago to discover new viruses and detect the ‘dark matter’ of biology involved in spreading diseases.

One leading Chinese scientist, who published the first genetic sequence of the Covid-19 virus in January last year, found 143 new diseases in the first three years of the project alone.

The fact that such a virus-detection project is led by both civilian and military scientists appears to confirm incendiary claims from the United States alleging collaboration between the Wuhan Institute of Virology (WIV) and the country’s 2.1 million-strong armed forces. Continue reading in full here.

What does Canada know? 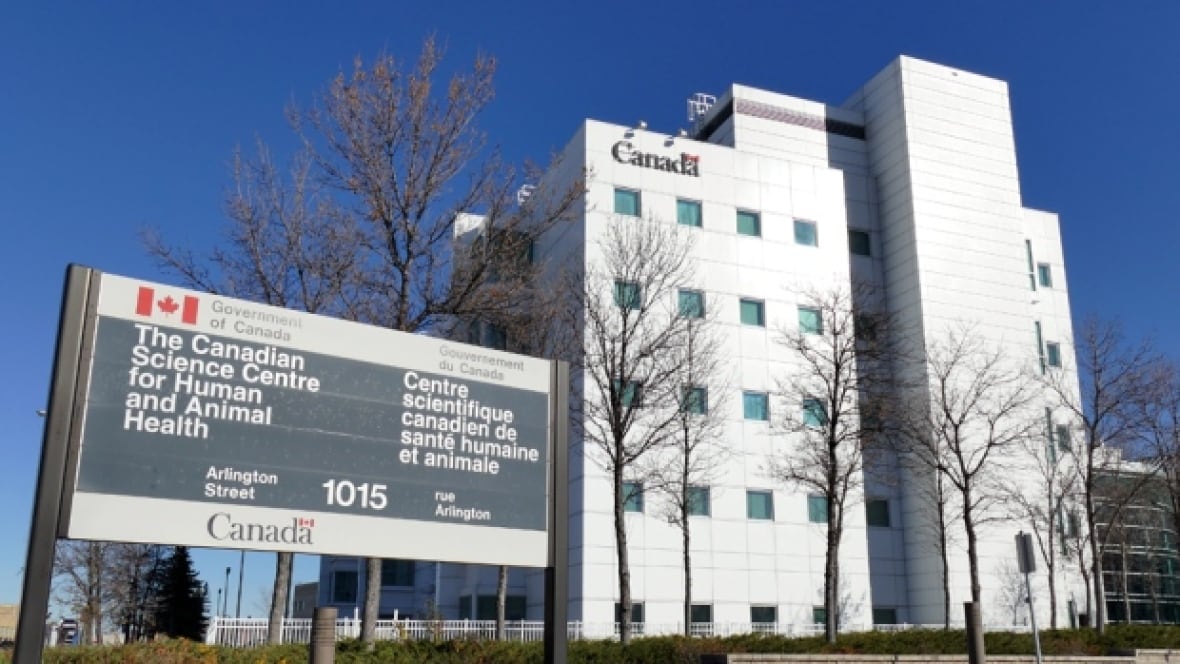 In July 2019, a rare event occurred in Canada, whereby a group of Chinese virologists were forcibly dispatched from the Canadian National Microbiology Laboratory (NML) in Winnipeg, a facility they worked in, running parts of the Special Pathogen Programme of Canada’s Public Health Agency.1 Experimental infections – including aerogenic ones – of monkeys with the most lethal viruses found on Planet Earth comprise nearly a routine therein. Four months earlier, a shipment of two exceptionally virulent viruses dealt with in the NML – Ebola and Nipah viruses – was on its way from NML, ended in China, and has thereafter been traced and regarded to be improper, specifically put as “possible policy breaches”, or rather but an “administrative issue”, ostensibly.2

Yet the scope of this incident is much wider, in actuality. The main culprit seems to be Dr. Xiangguo Qiu, an outstanding Chinese scientist, born in Tianjin. Heading until recently the Vaccine Development and Antiviral Therapies section of the Special Pathogens Programme, she primarily received her medical doctor degree from Hebei Medical University in China in 1985 and came to Canada for graduate studies in 1996.3 Later on, she was affiliated with the Institute of Cell Biology and the Department of Pediatrics and Child Health of the University of Manitoba, Winnipeg, not engaged with studying pathogens.4 But a shift took place, somehow. Since 2006,5 she has been studying powerful viruses, Ebola virus foremost, in the NML. The two viruses shipped from the NML to China – Ebola and Nipah – were studied by her in 2014, for instance (together with the viruses Machupo, Junin, Rift Valley Fever, Crimean-Congo Hemorrhagic Fever and Hendra).6 Yet utmost attention has been paid to Ebola, with the highly legitimate aim of developing effective prophylaxis and treatment for infected people. Inevitably, her works included a variety of Ebola wild strains – among them the most virulent one, with 80% lethality rate – and much relied on experimental infections of monkeys, including via the airways.7 Remarkable achievements were attained, indeed, and Dr. Qiu accepted the Governor General’s Innovation Award in 2018. More here.

Even media in India is asking for the same transparency on the Canadian component:

Source: China has been a signatory to the Biological Weapons Convention since 1984, and has repeatedly insisted it is abiding by the treaty that bans developing bio-weapons.

But suspicions have persisted, with the U.S. State Department and other agencies stating publicly as recently as 2009 that they believe China has offensive biological agents.

Though no details have appeared in the open literature, China is “commonly considered to have an active biological warfare program,” says the Federation of American Scientists. An official with the U.S. Army Medical Research Institute of Chemical Defence charged last month China is the world leader in toxin “threats.”

In a 2015 academic paper, Shoham – of Bar-Ilan’s Begin-Sadat Center for Strategic Studies – asserts that more than 40 Chinese facilities are involved in bio-weapon production.

China’s Academy of Military Medical Sciences actually developed an Ebola drug – called JK-05 — but little has been divulged about it or the defence facility’s possession of the virus, prompting speculation its Ebola cells are part of China’s bio-warfare arsenal, Shoham told the National Post.