Let’s begin here shall we? Know who is financing and attempting to control the fate of America.

In part from the Washington Times: 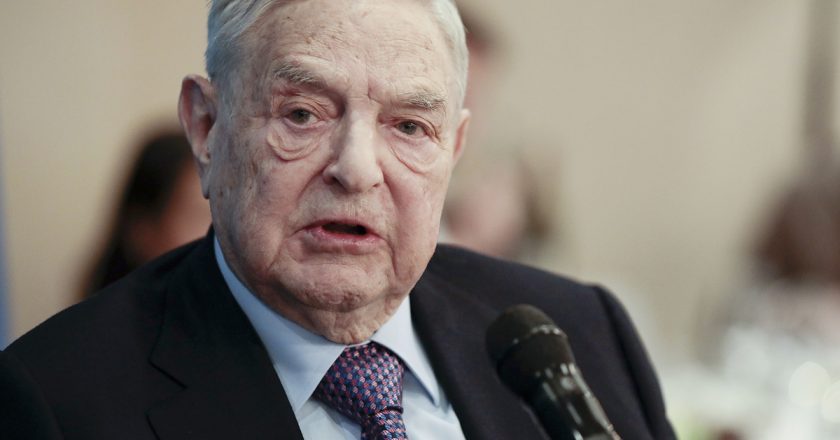 Soros-backed DAs in Philadelphia, St. Louis, San Francisco and other cities have fired scores of experienced prosecutors and, as promised, stopped prosecuting low-level quality-of-life crimes such as disorderly conduct, vagrancy and loitering.

Now for more from Julie Kelly.

As I reported last week, a cabal of Democrats and NeverTrump Republicans are plotting a post-election civil war of sorts to make sure Joe Biden assumes the presidency even if Donald Trump legitimately wins. “It’s insurrection,” President Trump said on Fox News last week when asked about the widely-circulated plan. “We’ll put them down very quickly if they do that.”

Let’s hope. A document released last month by the Transition Integrity Project, a headfake name to give the depraved group the appearance of decency, is a shocking battle plan that would plunge the country into more chaos. The same agitators on the Left and NeverTrump Right who’ve stoked nonstop political upheaval over the past four years will exploit our current instability to throw the election to the Democrats.

But this is more than the far-fetched hallucinations of political outcasts. The mayhem they’ve been war-gaming will be heavily funded by a number of Trump-hating billionaires, and those people have no intention of losing out on their investment.

The mostly behind-the-scenes attempt between Election Day and Inauguration Day to prevent Donald Trump from taking office the first time—one that miraculously failed despite help from the media and the most powerful government agencies in the world—will go public in 2020. And instead of help from James Comey, Jim Clapper, or John Brennan, the 2020 version will be bolstered by the likes of George Soros, Tom Steyer, Pierre Omidyar, a member of the Rupert Murdoch family, and Big Tech titans among others.

One of the co-founders of the Transition Integrity Project is Rosa Brooks. The Georgetown law professor and Obama Administration alum is a former counsel and board member for the Open Society Foundation, created in 1993 by George Soros. The foundation is a massive donor to hundreds of left-wing causes around the world; in July, Open Society Foundation announced a five-year, $150 million investment in “racial justice” groups including Black Lives Matter.

In a recent Washington Post op-ed, Brooks put the country on notice; unless Joe Biden wins in a landslide, we will be sorry. “With the exception of the ‘big Biden win’ scenario, each of our exercises reached the brink of catastrophe, with massive disinformation campaigns, violence in the streets and a constitutional impasse,” she warned. That reaction will occur, according to the simulations, even if Trump wins the Electoral College but loses the popular vote.

But Brooks isn’t the only connection between deep-pocketed foes of Donald Trump and the post-election insurrection.  Another new group, Protect the Results, is working hand-in-hand with Brooks “to mobilize if Donald Trump refuses to accept the results of the 2020 presidential election . . . [and] prepare for a potential post-election crisis.”

Protect the Results lists dozen of sponsors which in reality are mostly funded by only a handful of anti-Trump tycoons.

George Soros: One of Protect the Results main organizers is a nonprofit called Indivisible. Based out of Washington, D.C., Indivisible was founded in 2016 after Trump’s election; according to a political watchdog, Indivisible’s main donor is the Tides Foundation, a Soros-financed pass through organization.

“Started as a Google document detailing techniques for opposing the Republican agenda under Mr. Trump, [Indivisible] now has a mostly Washington-based staff of about 40 people, with more than 6,000 volunteer chapters across the country,” the New York Times reported in 2017. That year, Indivisible raised nearly $8 million, a figure we presume is much higher in 2020. The group’s policy director is a former advisor for an immigration advocacy center partially funded by grants from Soros.

Other Soros-funded entities including MoveOn.org, People for the American Way, 350Action, and Women’s March are listed as Protect the Results partners. In an interview last month, Soros, a longtime Trump nemesis, suggested the president will be indicted if he loses in November “because he has violated the Constitution in many different ways.” One scenario war-gamed out by the post-election plotters is criminal charges brought against Donald Trump and his associates for unspecified crimes.

Pierre Omidyar: The founder of eBay has poured tens of millions into projects headed by NeverTrump “conservatives” including former Weekly Standard editor Bill Kristol since 2017.

Omidyar, whose net worth is around $17 billion, this week issued a blueprint for how to “reimagine capitalism in America” which would “ensure that people who have been historically and systematically marginalized by structural racism, colonialism, paternalism, and indifference will have opportunity, power, and the self determination that comes from economic prosperity and a vibrant, fair, and responsive democracy.”

Most of Omidyar’s largess has been directed to left-wing causes and Democratic candidates over the years but he found political soulmates on the NeverTrump Right. Two NeverTrump outfits—Republicans for the Rule of Law and Stand Up Republic—are Protect the Results partners. Stand Up Republic is fronted by NeverTrumper Evan McMullin; Republicans for the Rule of Law, headed by Kristol, is one of many groups that receives grants from Omidyar’s vast network.

Kristol participated in the post-election tabletop exercises and bragged on Twitter that he had played the role of President Trump.

James and Kathryn Murdoch: The son and daughter-in-law of Fox News founder Rupert Murdoch are spending lots of money to separate themselves from the family’s conservative legacy. James resigned from the company’s board in July over disputes with the cable news channel’s “editorial content.”

The Murdochs, worth a reported $2 billion, are donors to Kristol’s Republicans for the Rule of Law and another Kristol-operated group, Defending Democracy Together, which is spending tens of millions on advertisements in swing states featuring purported Republicans planning to vote for Joe Biden. (The Murdochs also support the former vice president.)

Defending Democracy Together publishes The Bulwark, an online magazine that replaced Kristol’s now-defunct Weekly Standard. The blog houses a number of NeverTrumper editors and writers including Charles Sykes and Mona Charen. The Bulwark, like other NeverTrump organs, is pushing the idea that the president, not the Democrats or Joe Biden, won’t accept the results of the election. (Omidyar also supports Defending Democracy Together.)

Tom Steyer: NextGen America, fronted by failed Democratic presidential candidate and multi-billionaire Tom Steyer, is involved in Protect the Results. Steyer spent $123 million in the 2018 election cycle; NextGen America will spend at least $45 million to help elect Joe Biden by persuading young voters to use mail-in ballots. While lamenting out-of-control wildfires in his home state, Steyer told CNN on Monday that the only solution to the alleged climate crisis is “honest to God, Joe Biden.”

While this list covers the anti-Trump vehicles offically bankrolling the post-election revolt, it does not account for the unquantifiable in-kind donations by Big Tech. As I will detail in my next column, Silicon Valley already is seeding the ground for a Biden victory at all costs by using a combination of censorship and intimidation aimed not just at Republican voters but at the president himself—involvement that can justifiably be described as election interference on a scale our foreign adversaries could only dream of.