Perhaps the Federal government needs to spend time in the classroom understanding religion and the culture of the Amish for starters. We all know about chemicals and additives in our food, beverages, medicines and water. We have come to understand all things GMO and for that reason, organic food products have been all over the grocery shelves for many years. No one understands GMO and organic farming more than the Amish. So why is the Federal government aggressively working to terminate Amos Miller’s farm operation in Pennsylvania? Simply put…POWER

In full disclosure, I personally have spent time on Amish farms and they are extraordinary well run operation.

“Amos Miller Organic Farm is our century-old Amish family farm in Bird-in-Hand, Pennsylvania – serving its Private Member Association. The farm raises its animals and other pure foods the way nature intended and we are proud to be entirely chemical, cruelty and GMO-free. The animals are born and raised without antibiotics or hormones and they spend their entire lives naturally and stress-free out on pasture. All of the farm’s food is traceable, pure and grown on nutrient dense soil, under traditional time-honored methods.
The farm is now under attack by the USDA about non-conforming practices, the practices which pre-date the USDA. They are suing the farm to comply with USDA laws, concerning the way the farm animals are processed and how our food is labeled. The farm and its members believe that we have the right of free assembly and the right to choose how our food is processed and consumed without the USDA dictating to the farm. (hat tip Andrew Torba)

In part from Rebel News:

Miller’s Organic Farm is located in the remote Amish village of Bird-in-Hand, Pennsylvania. The farm supplies everything from grass-fed beef and cheese, to raw milk and organic eggs, to dairy from grass-fed water buffalo and all types of produce, all to roughly 4,000 private food club members who pay top dollar for high quality whole food.

The private food club members appreciate their freedom to get food from an independent farmer that isn’t processing his meat and dairy at U.S. Department of Agriculture facilities, which mandates that food be prepared in ways that Miller’s Organic Farm believe make it less nutritious.

Amos Miller, the farm’s owner, contends that he’s preparing food the way God intended — but the U.S. government doesn’t see things that way. They recently sent armed federal agents to the farm and demanded he cease operations. The government is also looking to issue more than $300,000 in fines — a request so steep, it would put the farm out of business. 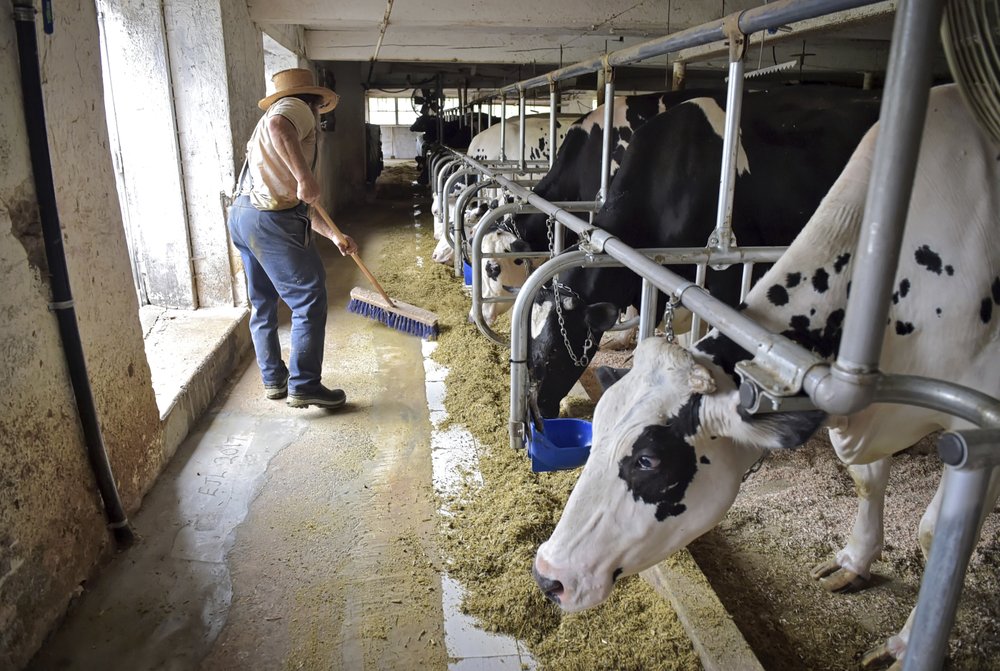 An Amish dairy farmer sweeps his barn on Sept. 13, 2017 in Lancaster, Pa. Local dairy farmers allege that cooperatives are encouraging more milk production to make more money at the expense of dairy farmers who suffer as prices drop during a glut. (Dan Marschka /LNP via AP)
(2017 article from The Associated Press)

For a deeper dive here is a report from Lancaster:

Miller’s case has been making its way through the court system since 2016 when the U.S. Department of Agriculture’s Food Safety and Inspection Service (FSIS), represented by the U.S. Department of Justice, filed a civil action requiring Miller and Miller’s Organic Farm to comply with federal meat and poultry food safety statutes.

The USDA wants Miller to operate under the “Federal Grant of Inspection” before slaughtering, preparing, processing or selling for distribution certain meat and poultry products.

Miller had been slaughtering animals like cattle, chickens and pigs without federal inspections of his operation for several years. He argued that his business model of selling private club memberships to his Miller’s Organic Farm exempted him from federal regulations.

The DOJ won permanent injunctions against Miller in civil actions closed out in March 2017 and November 2019, while the FSIS later found Miller again out of compliance.

Another case was opened in 2021, and Miller was working on the compliance issues. He was eventually forced to stop selling most meat and poultry products earlier this year.

Late in 2021, Miller asked to remove his lawyer, Dallas-based attorney Steven Lafuente, from the case. Judge Edward G. Smith did not accept the motion to withdraw Lafuente.

Miller filed an “interlocutory appeal” with the Eastern District Court on May 10, which was assigned to the Third Circuit Court. In the appeal, Miller challenges Judge Smith’s decision to retain Lafuente as his lawyer.

The appeal charges that Judge Smith determined “that Amos Miller does not have the right to choose his own attorney” and that the decision was made in “error” and that the “judge was acting irrationally and beyond the confines of public policy.”

Miller and his wife, Rebecca, were originally set to appear before Judge Smith on Sept. 26 in the U.S. Courthouse in Easton for a show cause hearing to consider adding Rebecca as a defendant in the case, to examine compliance of paying $305,065 in fines and the possible incarceration of Amos “for his continuing civil contempt, until defendants make such payments.”

On Friday, the show cause hearing was ordered stayed as the Third Circuit Court case makes its way through the system, with Judge Smith “finding that good cause exists” for the delay.

In his motion for a stay of proceedings, Miller argues that the DOJ and Judge Smith violated his rights by threatening in the show cause order to “incarcerate not only Amos Miller but his spouse (an un-named party) to this action.”

“Defendant believes these actions are unconscionable actions that shock the conscience, and if RPII (real party in interest) were not Amish and being restrained by the Amish Elders, greater fear of man’s newspapers than God’s words in the Holy Bible would be actionable sounding in tort,” the motion stated.

Pete Kennedy, a Florida-based attorney who works with the Weston A. Price Foundation, a nonprofit organization promoting food freedom issues, said the Miller case stands as an important benchmark that could have widespread impacts on small farming operations.

“The meat regulations in this country favor the meat packers,” Kennedy said. “In the meantime, many people Amos’s size have gone out of business because of the regulations. People might not agree with the way he’s approaching things, but it’s an important fight. At the least you’d like to come out of this with a more favorable interpretation of the law by the USDA.”

Miller said that it’s the growing regulations that are causing some of the problems in the food supply that have appeared this year.

“One reason the food supply is getting low is because of the regulations that the government is forcing upon us,” Miller said. “They don’t allow farmers to be farmers, and it could run our country into a nightmare or chaos.” More here.