Remember, the anti-Assad forces otherwise known as rebels don’t have aircraft and don’t have bombs that would create craters in the ground. Oh yeah, notice that Russia has not produced their own investigations or conclusions as they pledged to do? 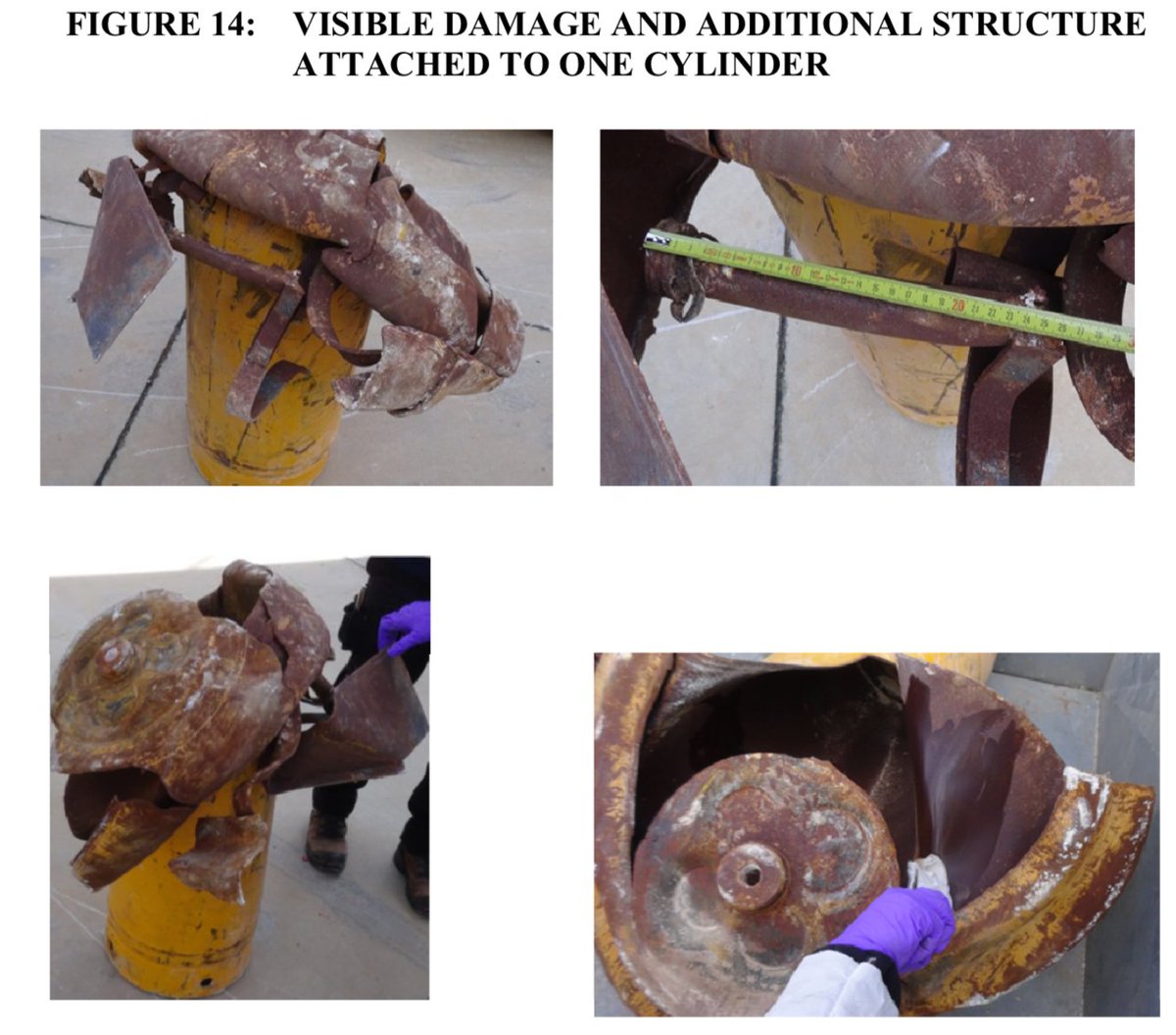 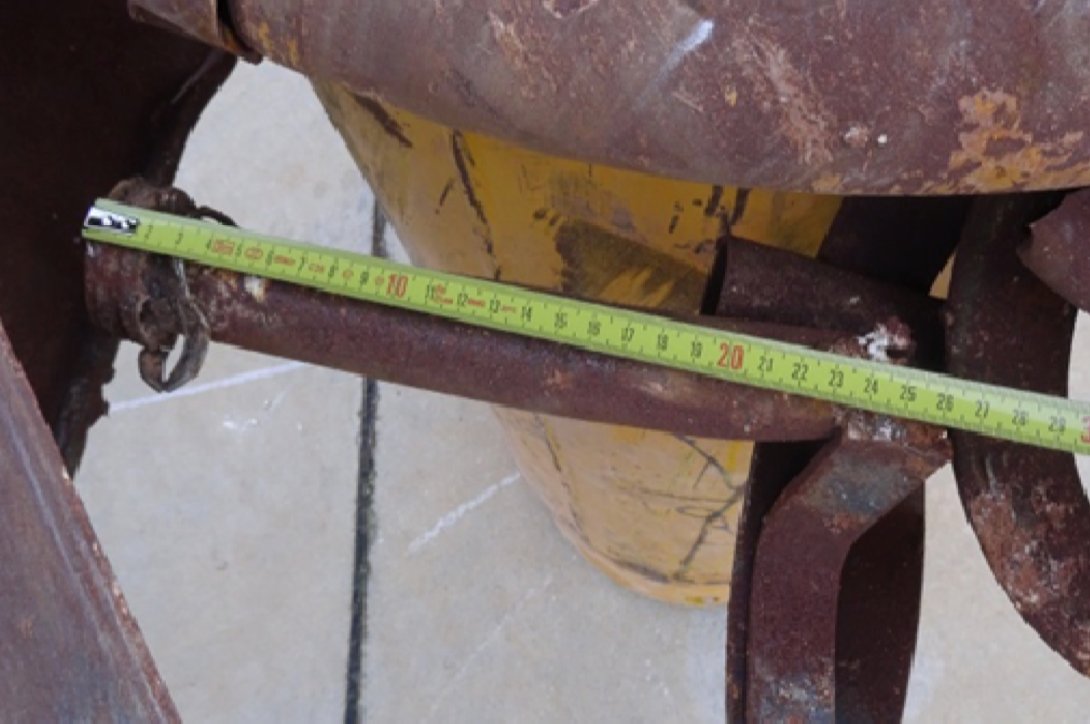 The exact same sort of wheel assembly we saw on the Douma chlorine bombs on the chlorine bomb used in Saraqib! 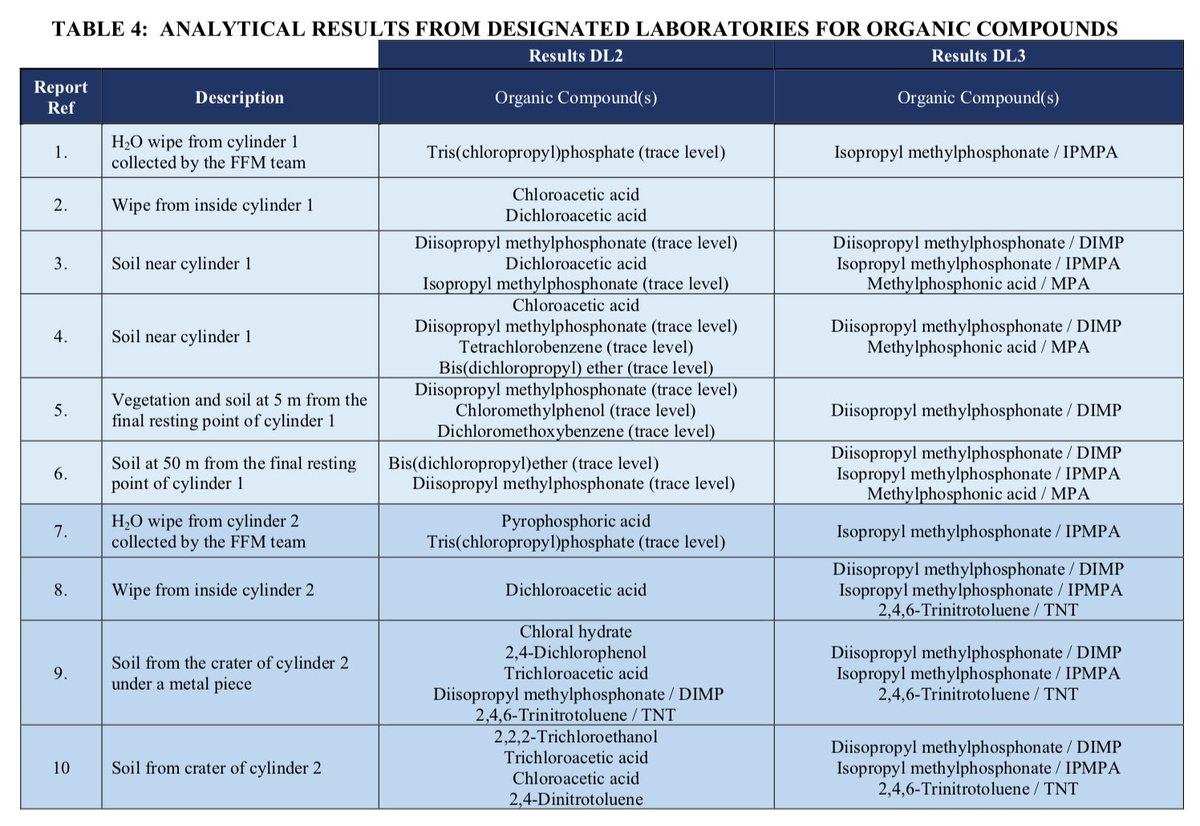 The details of samples taken are interesting in light of the Douma attack, soils samples and samples from the munitions confirm the presence of chlorine, although these were taken close to the time of attack. 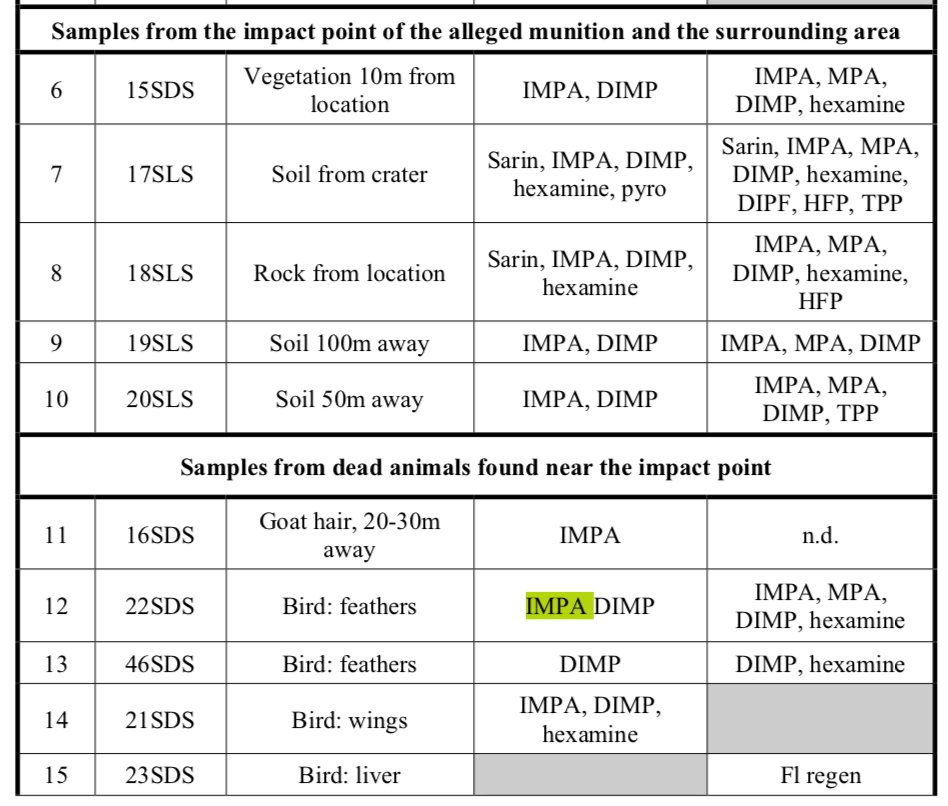 Here’s samples from Khan Sheikhoun, showing the same three chemicals as detected in the Saraqib attack, all indicators of Sarin use.

THE HAGUE, Netherlands — 16 May 2018 —The Fact-Finding Mission (FFM) of the Organisation for the Prohibition of Chemical Weapons (OPCW), confirmed in a report released yesterday that chlorine was likely used as a chemical weapon on 4 February 2018 in Saraqib, Idlib Governorate, Syrian Arab Republic.

The FFM determined that chlorine was released from cylinders by mechanical impact in the Al Talil neighbourhood of Saraqib.

The conclusions are based inter alia on the presence of two cylinders, which were determined as previously containing chlorine; witness testimony; environmental samples that demonstrated the unusual presence of chlorine in the local environment; and the number of patients at medical facilities shortly after the incident who showed signs and symptoms consistent with exposure to chlorine and other toxic chemicals.

The Director-General stated: “I strongly condemn the continued use of toxic chemicals as weapons by anyone, for any reason, and in any circumstances. Such acts contradict the unequivocal prohibition against chemical weapons enshrined in the Chemical Weapons Convention.”

The FFM’s report on the Saraqib incident has been shared with States Parties to the Chemical Weapons Convention.  The report was also transmitted to the UN Security Council through the UN Secretary-General.

In response to persistent allegations of chemical weapon attacks in Syria, the OPCW Fact-Finding Mission (FFM) was set up in 2014 with an on-going mandate “to establish facts surrounding allegations of the use of toxic chemicals, reportedly chlorine, for hostile purposes in the Syrian Arab Republic”. The FFM’s mandate is to determine whether chemical weapons or toxic chemicals as weapons have been used in Syria. It does not include identifying who is responsible for alleged attacks. Attribution was part of the mandate of the OPCW-UN Joint Investigative Mechanism, set up by the UN Security Council, which expired in November 2017.

The FFM has previously confirmed with a “high degree of confidence” the use of chlorine, sulfur mustard, and sarin as weapons.

The FFM is required to study available information relating to allegations of use of chemical weapons in Syria, including information provided by the Syrian Arab Republic and others. The FFM employs investigative methods to determine if chemical weapons have been used. It interviews witnesses and obtains environmental and bio-medical samples and physical evidence for analysis.

The Organisation for the Prohibition of Chemical Weapons operates according to a strict confidentiality regime, which governs the operations of the Organisation, protects the integrity of its investigations, ensures the security of its technical experts, and determines what information can be made public.

As the implementing body for the Chemical Weapons Convention, the OPCW oversees the global endeavour to permanently and verifiably eliminate chemical weapons. Since the Convention’s entry into force in 1997 – and with its 192 States Parties – it is the most successful disarmament treaty eliminating an entire class of weapons of mass destruction.