This is hardly a complete snapshot, however with President Trump considering the decertification of the JCPOA with Iran, adding the IRGC to the terror list and now seeking the arrest of two Hezbollah leaders from the 1983 Marine barracks bombing…the case against Iran is building. Iran is watching closely as it too has threatened a response which includes U.S. military bases as targets.

Iran, as rightly noted by Trump has exported terror for decades and the previous administration dismissed all that terror history for the sake of a deal with Iran. It also cannot be overlooked that Hezbollah took attacks into our hemisphere with two in Argentina. Noted here and here.

Talal Hamiyah is a top military leader of Hezbollah in charge of orchestrating its operations abroad. Hamiyah heads Hezbollah’s External Security Organization (ESO).* The ESO is responsible for planning and executing Hezbollah’s terrorist activities outside of Lebanon.*

Hamiyah is suspected of involvement in the 1994 Hezbollah attacks in Argentina.* Security officials recorded Hamiyah praising “our project in Argentina” in a conversation with his predecessor, Imad Mugniyah.* Hamiyah replaced Mughniyeh after the latter was killed in 2008.*

There have not been any attacks specifically attributed to the ESO since 1994.* Israeli intelligence officials believe Hamiyah is recruiting Hezbollah cells around the world, primarily in South America, Western Europe, and Africa.* Sympathetic Shiite communities offer Hamiyah opportunities for recruitment and fundraising.* Israeli intelligence has accused Hamiyah of coordinating with Moqtada Sadir’s Mahdi Army and other Shiite militias in Iraq following the U.S. invasion.* Hamiyah’s cells reportedly rely on Iranian embassies to help transfer weapons. 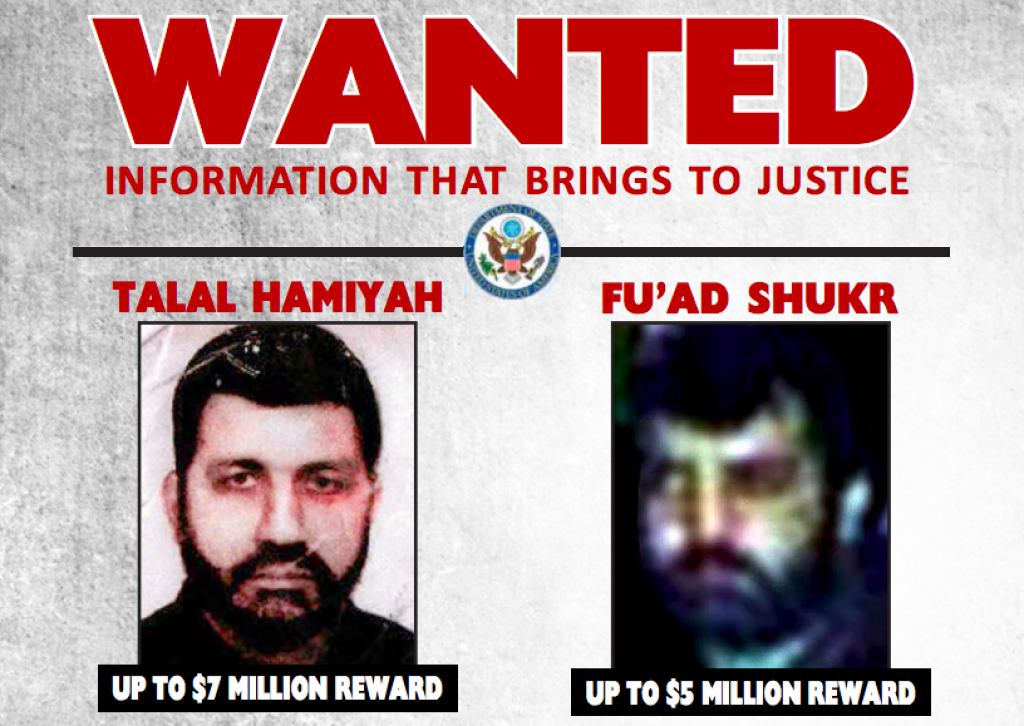 The State Department announced today that it is offering millions of dollars as rewards for information concerning the whereabouts of two senior Hezbollah leaders. The two Lebanese men are Hezbollah veterans with well-established terrorist credentials. One of the two allegedly “played a central role” in the 1983 Marine Barracks bombing in Beirut, Lebanon. That suicide bombing helped inspire a generation of Shiite and Sunni jihadists.

State is offering a $7 million bounty for Talal Hamiyah, the head of Hezbollah’s External Security Organization (ESO). The ESO “maintains organized cells worldwide” and is “responsible for the planning, coordination, and execution of terrorist attacks outside of Lebanon.” The ESO “primarily” targets “Israelis and Americans.”

The US designated Hezbollah as a terrorist organization in 1997, but State modified the designation in June, adding some of the group’s aliases. Foggy Bottom noted that both the Foreign Relations Department (FRD) and the ESO are “key components” of Hezbollah.

The ESO is “also known as the Islamic Jihad Organization” (IJO) and “was established by” Imad Mughniyah, a notorious Hezbollah leader who was killed in 2008. Mughniyah is widely credited with orchestrating some of Hezbollah’s most notorious acts of terror against the US.

After Mughniyah’s death, Hamiyah assumed leadership of the ESO/IJO. Hamiyah was added to the US government’s list of specially designated global terrorists in Sept. 2012.

Hamiyah’s wing of Hezbollah has been operational since the early 1980s, when it carried out a series of attacks against American and Western interests inside Lebanon and elsewhere. The ESO/IJO has continued to plot around the globe in the decades since.

In June, the Department of Justice announced the arrests of two alleged Hezbollah operatives who worked for the ESO/IJO. The men are accused of performing surveillance on prospective American and Israeli targets in Panama and New York City, as well as other acts. [For more on the arrests and the history of the ESO/IJO, see FDD’s Long War Journal report, Analysis: 2 US cases provide unique window into Iran’s global terror network.]

State also announced a reward of $5 million for information on Fuad Shukr, “a longtime senior advisor on military affairs.” Both Hamiyah and Shukr answer to Hezbollah’s Secretary General, Hasan Nasrallah.

Shukr is “a senior Hezbollah operative” and a “military commander” in charge of the group’s forces in southern Lebanon. He “serves on Hezbollah’s highest military body, the Jihad Council,” according to Foggy Bottom.

Shukr’s dossier of “activities” stretches back “over 30 years,” according to State. He “was a close associate of” Mugniyah.

The US government says Shukr “played a central role in the planning and execution of the Oct. 23, 1983 US Marine Corps Barracks Bombing in Beirut, Lebanon, which killed 241 US service personnel.”

The 1983 attack was a seminal event in the history of modern jihadism. Hezbollah conducted near simultaneous suicide bombings on the barracks for Marines and French service members. Both America and France had contributed military personnel to a multinational peacekeeping force in Lebanon. While France retaliated by bombing Iran’s Islamic Revolutionary Guard Corps, which is intertwined with Hezbollah, America failed to respond with force. The bombing at the Marine Barracks contributed to the Reagan administration’s decision to withdraw from Lebanon.

Iranian-backed terrorists weren’t the only jihadists emboldened by the American withdrawal from Lebanon. So were Sunni jihadists, including a young Osama bin Laden.

The 1983 bombings on the Marine and French barracks served as a model for al Qaeda’s most devastating attack prior to the 9/11 hijackings: the Aug. 7, 1998 US Embassy bombings in Kenya and Tanzania. The twin attacks left 224 people dead.

The 9/11 Commission documented this key link in its final report. Discussions between al Qaeda and Iran in the early 1990s were brokered by Hassan al-Turabi, who was then a prominent Islamist in Sudan’s government. Al Qaeda was based in Sudan at the time and Turabi’s country housed various bad actors looking to cut deals with one another. Turabi advocated big tent jihadism when it came to confronting the US and the West. Turabi was even nicknamed the “Pope of Terrorism” for his ecumenical approach. Consistent with his vision of a grand anti-Western alliance, Turabi “sought to persuade Shiites and Sunnis to put aside their divisions and join against the common enemy,” according to the 9/11 Commission.

The discussions between “al Qaeda and Iranian operatives led to an informal agreement to cooperate in providing support – even if only training – for actions carried out primarily against Israel and the United States,” the 9/11 Commission found. “Not long afterward, senior al Qaeda operatives and trainers traveled to Iran to receive training in explosives.” During the “fall of 1993, another such delegation went to the Bekaa Valley in Lebanon for further training in explosives as well as in intelligence and security.” The Bekaa Valley has long been a Hezbollah stronghold.

The training taught al Qaeda operatives how to carry out suicide bombings such as those orchestrated by Shukr and Mughniyah in Lebanon. The 9/11 Commission wrote that Bin Laden “reportedly showed particular interest in learning how to use truck bombs such as the one that had killed 241 US Marines in Lebanon in 1983.”

Federal prosecutors in the Clinton administration discovered Iran’s and Hezbollah’s training of al Qaeda operatives. They included the relationship in their indictment of al Qaeda in 1998, noting that bin Laden and his men had “forged alliances” with the Sudanese regime, as well as “the government of Iran and its associated terrorist group Hezbollah for the purpose of working together against their perceived common enemies in the West, particularly the United States.”

More details concerning Iran’s and Hezbollah’s assistance came to light during the trial of some of the al Qaeda operatives responsible for the 1998 US Embassy bombings.

In his plea hearing before a New York court in 2000, Ali Mohamed – an al Qaeda operative who was responsible for performing surveillance used in the bombings – testified that he had set up the security for a meeting between bin Laden and Mugniyah. “I arranged security for a meeting in the Sudan between Mugniyah, Hezbollah’s chief, and bin Laden,” Mohamed told the court.

Jamal al Fadl, an operative who was privy to some of al Qaeda’s most sensitive secrets, conversed with his fellow al Qaeda members about Iran’s and Hezbollah’s explosives training, which included take-home videotapes so that al Qaeda’s terrorists would not forget what they learned. “I saw one of the tapes, and he [another al Qaeda operative] tell me they train about how to explosives big buildings,” Al Fadl told federal prosecutors.

One of the al Qaeda leaders who attended the training was Saif al Adel, who has long been wanted for his role in the embassy bombings. Al Adel fled to Iran after the 9/11 hijackings and was tied to operations elsewhere, including inside Saudi Arabia. His status was murky for years, but the Iranians reportedly freed him from some form of detention in 2015. Some reports have placed him in Syria, but al Adel’s current location has not been confirmed.

Although many assume that Iran and al Qaeda couldn’t cooperate because of their ideological differences, the 9/11 Commission concluded “that Sunni-Shia divisions did not necessarily pose an insurmountable barrier to cooperation in terrorist operations.” The 9/11 Commission (pp. 240-241) also found intelligence connecting Mugniyah’s men to some of the flights taken by al Qaeda’s hijackers and called for the US government to investigate further.

In more recent years, the Iranian government has allowed al Qaeda to operate a “core facilitation pipeline” on Iranian soil. According to the US government, this facilitation network exists despite the fact that the two sides are on opposite sides of the wars in Syria and Yemen.