WASHINGTON, D.C. – U.S. Sen. Ted Cruz (R-Texas), member of the Senate Foreign Relations Committee, today introduced the Onshoring Rare Earths Act of 2020 or ORE Act, legislation to end U.S. dependence on China for rare earth elements and other critical minerals used to manufacture our defense technologies and high tech products by establishing a supply chain for these minerals in the U.S., including by requiring the U.S. Department of Defense (DOD) to source these minerals domestically.

“Our ability as a nation to manufacture defense technologies and support our military is dangerously dependent on our ability to access rare earth elements and critical minerals mined, refined, and manufactured almost exclusively in China. Much like the Chinese Communist Party has threatened to cut off the U.S. from life-saving medicines made in China, the Chinese Communist Party could also cut off our access to these materials, significantly threatening U.S. national security. The ORE Act will help ensure China never has that opportunity by establishing a rare earth elements and critical minerals supply chain in the U.S.”

A whole slate of new bad behaviors by China’s repressive regime have been laid bare by the COVID-19 crisis. There were already plenty of complaints before the pandemic began, but the coronavirus seems to be supercharging the pressure on U.S. companies to reduce their Chinese sourcing. One of the biggest recent challenges in that regard has been China’s dominance in mining and processing critical rare earth minerals. These are vital building blocks for everything from smart phones, EV batteries and medical imaging machines to advanced defense weaponry, so our reliance on a less-than-friendly nation for our supply presents a huge political and economic risk. But right now China controls 90% of global rare earth production.

It’s amazing good fortune, then, that out in the barren scrub of Far West Texas 85 miles east of El Paso, an unassuming 1,250-tall mountain called Round Top holds the promise of making America largely self-sufficient in these critical minerals. The mountain contains five out of six light rare earths (such as neodymium), 10 out of 11 heavy rare earths (dysprosium, for example), and all five permanent magnet materials. What’s more, Round Top has large deposits of lithium, critical for batteries in EVs and power storage. More here.

The global map is here.

According to the United States Geological Survey, as of 2018, China produced around 80% of world demand for rare earth metals (down from 95% in 2010). Their ores are rich in yttrium, lanthanum, and neodymium.

Since August of 2010, fears over Chinese dominance of crucial rare earth supplies have lingered as China restricted export quotas of the metals with no official explanation, immediately sparking debate over decentralization of world rare earth production. 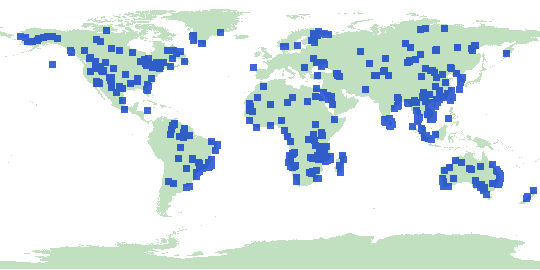 Great quantities of rare earth ores were found in California in 1949, and more are being sought throughout North America, but current mining is not significant enough to strategically control any portion of the global rare earths market (the Mountain Pass mine in California still has to ship its minerals to China to be processed).

Rare earths are traded on the NYSE in the form of exchange-traded funds (ETFs) that represent a basket of supplier and mining stocks, as opposed to trading in the metals themselves. This is due to their rarity and price, as well as their almost strictly industrial consumption. Rare earth metals are not considered a good physical investment like precious metals, which hold low-tech intrinsic value.

Economically, the biggest changes happened in the 1990s and early 2000s, starting when the United States conferred permanent “Most Favored Nation” status on China.

“It was a terrible mistake to give it up because we were unable to manage or govern the Chinese after that,” agreed Halper.

The next shoe to drop came with China’s inclusion in the World Trade Organization.

We handcuffed ourselves and we’ve been handcuffed ever since. What was once an $80 billion trade deficit is now at $4.5 trillion. It should have been foreseeable, but Wall Street and multinational corporations, which foresaw big returns from China, lobbied Congress hard to get these things approved.