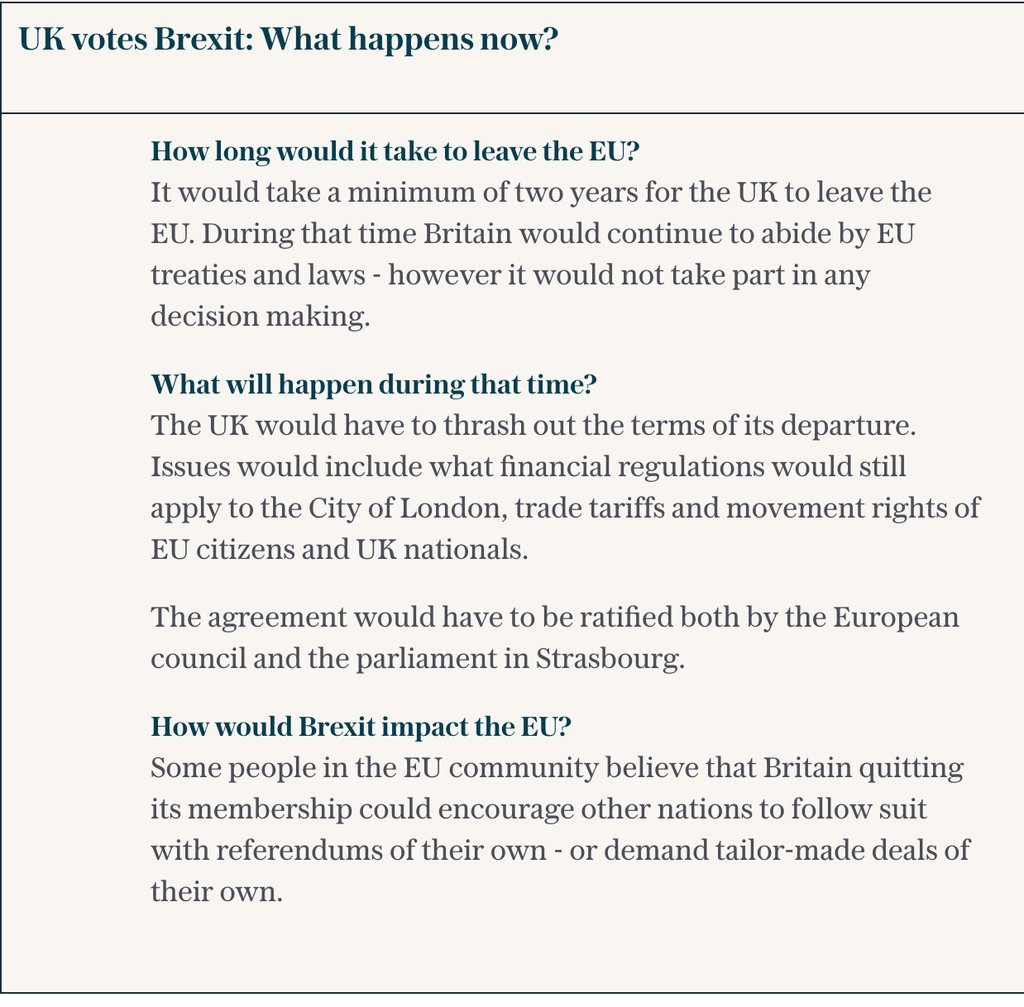 Populism and Elitism finally lost…the people have spoken and the battle for independence is long and hard but ultimately sweet. Citizens are disgusted with being ruled by Belgium.

The dynamics have not been determined and are impossible to predicts.

The Bank of England is working earnestly to calm markets across the globe.

How Could Scotland Protect its EU Links After Brexit?

It is often presumed that Scotland will continue to be part of the EU, either through a UK-wide vote to remain in the EU referendum or by joining the EU after a successful second independence referendum, writes Kirsty Hughes. She argues, however, that it is possible that Scotland could find itself outside the EU following a vote to leave, and that it should consider how to develop a differentiated relationship with the EU distinct from England.

At issue going forward is Article 50:

1. Any Member State may decide to withdraw from the Union in accordance with its own constitutional requirements.

2. A Member State which decides to withdraw shall notify the European Council of its intention. In the light of the guidelines provided by the European Council, the Union shall negotiate and conclude an agreement with that State, setting out the arrangements for its withdrawal, taking account of the framework for its future relationship with the Union. That agreement shall be negotiated in accordance with Article 218(3) of the Treaty on the Functioning of the European Union. It shall be concluded on behalf of the Union by the Council, acting by a qualified majority, after obtaining the consent of the European Parliament.

3. The Treaties shall cease to apply to the State in question from the date of entry into force of the withdrawal agreement or, failing that, two years after the notification referred to in paragraph 2, unless the European Council, in agreement with the Member State concerned, unanimously decides to extend this period.

A qualified majority shall be defined in accordance with Article 238(3)(b) of the Treaty on the Functioning of the European Union.

5. If a State which has withdrawn from the Union asks to rejoin, its request shall be subject to the procedure referred to in Article 49.

Prime Minister, David Cameron has resigned and will leave office by October. Cameron is expected to notify the EU this morning that the U.K. is invoking Article 50 of the Lisbon Treaty, under which the two sides will have an initial two years to agree how their relations will look in future.

Markets were generally unprepared for “Brexit” after the last opinion polls, and more important Britain’s widely watched bookies, before the vote had pointed to a victory for the Remain camp. The Bank of England, the IMF, and OECD, as well as the Fed’s Janet Yellen, have all warned of a severe bout of volatility after a “Brexit” vote, with longer-lasting damage to the economy as a result of higher uncertainty, lower investment and more obstacles to trade. More here from Forbes.