Back it 2014, this site attempted to sound the alarm on Qatar. So, it is coming out of the shadows again and causing huge diplomatic chaos domestically and throughout the Middle East.

Related reading: The chairman of the channel is Hamad bin Thamer Al Thani. Barack Obama hosted him at the White House. 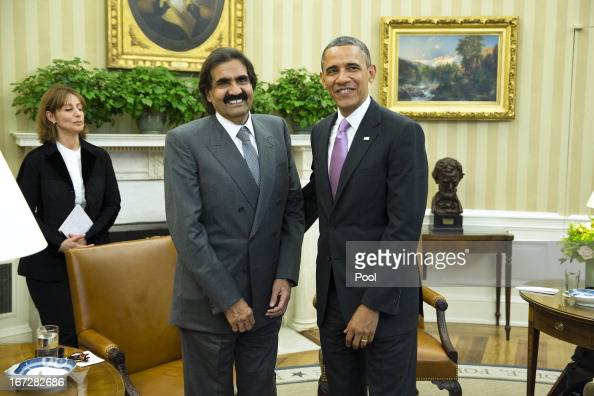 Additionally, Obama attended a West Point Academy graduation, where al Thani’s son was graduating, the very same weekend that the Taliban 5 were swapped for Bowe Bergdahl. Side note: the largest U.S. military base outside the country is in Qatar.

AEI: As the current crisis between Qatar and many moderate Arab states approaches its second month, one of the key complaints which the anti-Qatar coalition has voiced is about Al Jazeera, the Qatar-based satellite channel which was once the most watched Arabic station. Al Jazeera and its supporters argue that the station’s hard-hitting reporting is simply the manifestation of press freedom in a region sorely lacking it. Al Jazeera’s detractors, however, say it is an engine of extremism which fans the flames of terrorism and actively seeks to destabilize regional states.

Al Jazeera runs several different channels. Saudi Arabia, the United Arab Emirates, Egypt, and Bahrain object to Al Jazeera in Arabic which promotes the Muslim Brotherhood line and often seems to cross the line between news reporting and incitement. According to a State Department cable describing conversations between Qatari authorities and US diplomats, Qatar acknowledged that policy role and “leverage” which Al Jazeera represented for the Qatari state. The US military had significant experience with Al Jazeera Arabic in Iraq. It was not uncommon for an anonymous tip to direct US soldiers to an insurgent den which was empty of insurgents but rigged with explosives. When American forces would arrive on the scene, they would find Al Jazeera cameramen nearby and on neighboring rooftops, waiting to film the ambush.

Al Jazeera English is more familiar to many in Europe and the United States, but it would be wrong to assume the content between the two channels is equivalent. The English-language Al Jazeera launders the image of its Arabic sibling. Al Jazeera English, for example, dedicates far greater time to minorities, social issues, and women. Al Jazeera’s experiment with a separate American channel, meanwhile, sputtered and died.

If Al Jazeera English isn’t Qatar’s main means to influence the Western media environment beyond serving to obfuscate the truth about Al Jazeera, then, what is? Here, Middle East Eye (MEE) — an increasingly prominent web portal — often obscures its finances, but it increasingly fills the gap as Qatar’s chief agent of influence. Groups like Human Rights Watch and Amnesty International incorporate MEE stories, as do newspapers like the New York Times and the Washington Post.

Delving into the details of MEE, however, show that it acts far less as a traditional journalistic outlet and far more as an English-language front for Qatari-supported groups like the Muslim Brotherhood and Hamas. British corporate records, for example, show that Jamal Awn Jamal Bessasso, a former official for both Al Jazeera in Qatar and the Hamas-affiliated al-Quds TV in Lebanon, owns and operates MEE through M.E.E. Ltd. A CV for Jamal Bessasso, since scrubbed from the internet, shows previous stints as director of planning and human resources for the Al Jazeera satellite network in Qatar and director of Human Resources for the Samalink Television Production Company in Lebanon.  Samalink is the registered agent for Al Quds TV’s website.  While David Hearst, MEE editor-in-chief, told the United Arab Emirates’ The National paper that Bessasso was “a colleague and the head of human resources and the legal director,” he denied that Bessasso was the MEE owner, despite his listings on corporate records. Neither Hearst, former news editor Rori Donaghy (in a tweet now deleted), nor other MEE employees, however, would identify who owned MEE if not Bessasso.

There are other links between MEE and Al Jazeera. Jonathan Powell, an Al Jazeera employee in charge of special projects in the chairman’s office and close associate of former Al-Jazeera Media Network chief Wadah Khanfar, acknowledged serving as launch consultant for MEE in an earlier version of his Linkedin profile (which he altered after an Emirati newspaper highlighted his role). Arwa Ibrahim and Jacob Powell also transitioned from Al Jazeera to work as MEE news editors, and Graeme Baker and Larry Johnson moved from Al Jazeera to MEE to become senior editors. At the very least, it appears that MEE recruited heavily from Al Jazeera.

The Hamas links run as deep. A former official of Interpal, a United Kingdom-based charity designated by the US Treasury Department as a financial supporter of Hamas, registered the Middle East Eye website. Prior to joining MEE, Donaghy worked for organizations founded by Hamas (such as the House of Wisdom in Gaza) and the Muslim Brotherhood (Emirates Center for Human Rights, which was set up with financing and assistance from the Cordoba Foundation, a Muslim Brotherhood entity).

Bessasso, meanwhile, has openly supported radical groups. In 2012, he shared a Facebook post praising Hamas. The following year, he shared a quote from Muslim Brotherhood theologian Yusuf Qaradawi encouraging followers to utilize “violence against those who deserve it.” Over the years, the MEE has bolstered its content with “exclusive” access to Hamas, seemingly acting as the terrorist group’s preferred outlet to the English-speaking world. Hearst has penned editorials praising and defending the Muslim Brotherhood and political Islam.

Long ago, political radicals and terrorists discovered that — so long as they called themselves human rights activists — journalists, other human rights activists, and even diplomats would accept their polemics at face value. It seems that the Qatari government and its Hamas and Muslim Brotherhood networks have discovered the same principle applies to news outlets and portals. Al Jazeera may be the most prominent example, but it seems that Al Jazeera’s managers now seek to seed other networks as well, and that Qatari funds mandate an agenda.