It is the conglomerate that the Supreme Leader, the Ayatollah Khamenei owns exclusively. “Setad Ejraiye Farmane Hazrate Emam,” or Setad. 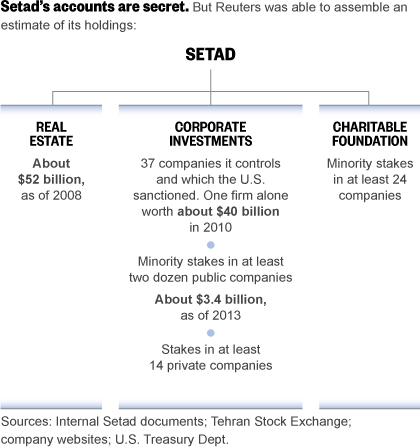 Setad was originally sanctioned by the U.S. Treasury in June 2013. The conglomerate “produces billions of dollars in profits for the Iranian regime each year,” said David Cohen, then the Treasury’s under secretary for terrorism and financial intelligence, at a Senate banking committee hearing that year.

All entities sanctioned for being part of the Iranian government are being taken off the SDN list as part of the nuclear deal, also called the Joint Comprehensive Plan of Action (JCPOA), though U.S. persons and entities will still be banned from dealing with them.

In January of 2017, a review by Reuters noted: But a Reuters review of business accords reached since then shows that the Iranian winners so far are mostly companies owned or controlled by the state, including Iran’s Supreme Leader, Ayatollah Ali Khamenei.

Of nearly 110 agreements worth at least $80 billion that have been struck since the deal was reached in July 2015, 90 have been with companies owned or controlled by Iranian state entities, the Reuters analysis shows.

In December of 2017: Treasury Department officials must publish a report chronicling the financial assets of Iran’s top leaders, under a bill that passed the House on Wednesday.

The legislation, which passed 289-135, must still clear the Senate before President Trump can sign it into law. It’s a potential boon to Iranian dissidents against the regime, who stand to gain insight into corruption by top officials.

Meanwhile, as the protests continue in Iran against the regime and rightly so, questions arise due to not only Senate votes on sanctions but staying with the Joint Comprehensive Plan of Action, meaning the Iran nuclear deal. Why is there even a question based on additional facts surfacing in the last year? Well, the left and those that remain with John Kerry and Barack Obama are adding new pressures to stay in the JCPOA. Further, complications arise from those countries that are also part of the deal. They too want the deal sustained.

In a story titled “U.S. security experts back Iran nuclear deal, as Trump faces deadlines,” Reuters reports that a coalition of national security experts want the president to continue the Iran deal. The report claims, without any context, that all of the people who signed a letter in favor of the deal are “national security experts.” Additionally, these “experts” are from an organization called the “National Coalition to Prevent an Iranian Nuclear Weapon.”

It turns out, however, that some of those listed on the document have severe conflicts of interests, none of which were disclosed in the letter.

It also turns out that the National Coalition to Prevent an Iranian Nuclear Weapon is not an actual organization. A Google search of the group turned up nothing before Monday. The group was created this week with the apparent purpose of garnering support for the nuclear deal. None of this is reported in the Reuters article. It is only revealed through the group’s statement provided on The National Interest website.

The outfit’s title also presumes its members are national security hawks, when this is far from the case.

Members of the “National Coalition” include a who’s who of the prominent organizers of the campaign to rally support for the Obama administration’s nuclear deal with Tehran.

Included on the list is Joseph Cirincione, who served as the money man for President Obama’s Iran “echo chamber.” Cirincione has admitted to paying off a “network of 85 organizations and 200 individuals” who were “decisive in the battle for public opinion” over the Iran deal.

Gary Sick, another signee, was one of the chief organizers of the Iran echo chamber. According to the Washington Free Beacon, Sick created an invite-only listserv to distribute pro-Tehran talking points to Obama-friendly journalists and influential figures.

The coalition also includes Ambassador Thomas Pickering, who is a paid lobbyist for Boeing. The aviation company is attempting to secure a multi-billion-dollar jetliner deal with the Iranian regime. If the Iran deal falls through, so does Boeing’s deal.

Paul Pillar, a disgraced former CIA officer who was also on the letter, once drafted talking points arguing that it’s not a big deal if Iran is able to develop a nuclear weapon. “If Iran develops a nuclear weapon, the United States and the West could live with it, without important compromise to U.S. interests,” he wrote, according to Eli Lake of Bloomberg News.

It remains a mystery what President Trump will decide this time around. He has been troubled by Iran’s violent response to countrywide protests. The president has leveraged social media and several executive departments to raise awareness about the plight of Iranian protesters. He has also mulled enacting further sanctions against the regime.

As an aside, there too is pressure from Boeing, they want to protect the sale agreements of planes to Iran such that they have offered to ‘finance’ the payments, essentially layaway. Iran is looking for a method to make payments of $44B to both Air Bus and Boeing. Humm….but that Supreme leader has a major conglomerate remember?