Primer: Brady Doctrine is a law which requires the prosecution to turn over all exculpatory evidence to the defendant in a criminal case.

On Wednesday, the previously sealed Motion to Compel filed against federal prosecutors in the Michael Flynn case was made public with only minor redactions.

In her Motion to Compel, Powell catalogued 40 categories of evidence the government has refused to turn over. She seeks a court order requiring federal prosecutors to provide the withheld evidence under Brady and its progeny. Brady and its offshoots require prosecutors to disclose material exculpatory and impeachment evidence to the defense team. And, as Judge Sullivan made clear during Tuesday’s hearing, that duty exists even though Flynn had already pleaded guilty and even though he had agreed that the government would not be required to provide him with further evidence.

Powell, though, must still establish that the evidence sought is Brady material. Judge Sullivan seemed skeptical of the relevance of some of the evidence Powell mentioned and how it bore on Flynn’s guilt for the offense of conviction, namely lying to FBI agents. But Powell parried well, noting, for instance, that evidence concerning the texts exchanged between former FBI Agent Peter Strzok and DOJ lawyer Lisa Page were impeachment evidence.

In another exchange, Powell stressed that recently disclosed evidence showed the government had concluded that Flynn was not a Russian or Turkish agent, and, in fact that Flynn had briefed the government before meeting with Turkish officials. That evidence was relevant to sentencing, Powell argued, because it negates prosecutors’ claim that they had foregone a FARA violation charge against Flynn. “That’s a good point,” Judge Sullivan concurred.

Powell will have a chance in her reply brief to detail how each piece of evidence sought is either exculpatory or serves as impeachment evidence. Here there’s an interesting twist: Powell seems poised to also argue that the 40 pieces of evidence requested are exculpatory (and thus Brady material), because they will show that “the entire prosecution should be dismissed for egregious government misconduct and long-time suppression of Brady material.”

Some of the evidence Powell seeks is already presumed by many to exist, such as FISA applications pertaining to Flynn and the original 302 written shortly after FBI agents interviewed Flynn about his conversations with the Russian ambassador. But other evidence Powell identifies reveals that she has skinned all the snakes involved in SpyGate and knows exactly what went down. For instance, Powell requested “any information, including recordings or 302s, about Joseph Mifsud’s presence and involvement in engaging or reporting on Mr. Flynn and Mifsud’s presence at the Russia Today dinner in Moscow on December 17, 2015.”

Also intriguing is Powell’s request for: “All payments, notes, memos, correspondence, and instructions by and between the FBI, CIA, or DOD with Stefan Halper—going back as far as 2014—regarding Michael Flynn, Svetlana Lokhova, Mr. Richard Dearlove (of MI6), and Professor Christopher Andrew (connected with MI5) and Halper’s compensation through the DOD Office of Net Assessment as evidenced by the whistleblower complaint of Adam Lovinger, addressed in our brief.”

What is fascinating about this request is that the uninformed will see the 2014 date as evidence that Powell is on a fishing expedition, while in reality, her bid for this information shows that Powell has in three short months pieced together more tiles in the mosaic of the Russia collusion fraud than Robert Mueller did in two years. (this is an in part summary from Margot Cleveland is a senior contributor to The Federalist) 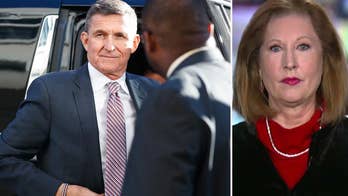 A couple of days ago, “We know that Mr. Mueller got a letter from Mr. Rosenstein that allowed him to target Michael Flynn Jr., and there was significant pressure to enter a guilty plea while they were hiding all the evidence that showed he had not been an agent of Russia, that there were no Logan Act violations,” Powell told Hannity.

Hannity asked Powell about the possibility that Flynn took a plea deal in order to protect his son from being prosecuted. Powell did not confirm Hannity’s scenario, but suggested it was possible.

“When you put together the fact that Mr. Mueller got the letter authorizing him to target Michael Flynn Jr., and they had seized Michael Flynn Jr.’s computers and electronic devices and those things, it’s not too hard to imagine that that might have happened,” she said.

“I don’t want to speak now to things that are not a matter of public record, but stay tuned because more and more will become apparent as we proceed through the litigation.”