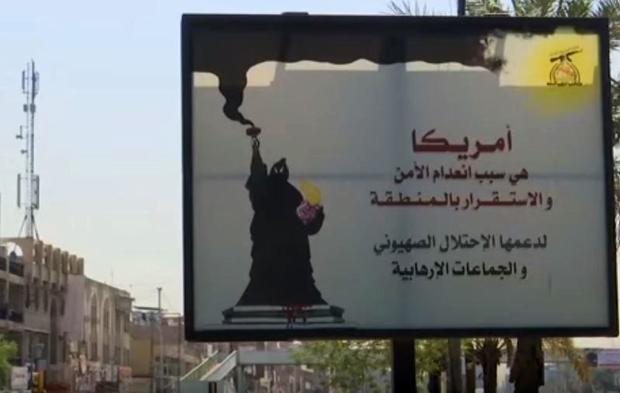 Billboards with the slogans “Death to America — Death to Israel” have appeared in the Iraqi capital of Baghdad in recent days. There are at least five of the large signs in central Baghdad, some less than a mile from the U.S. Embassy, the Iraqi presidential palace and the national government’s headquarters.

The signs appear to be part of a campaign by Iran, carried out through proxy groups that directly threaten U.S. troops in Iraq, to demonstrate its strength and reach in the region as tension between Washington and Tehran threatens to explode into conflict.

“The billboards erected in the streets of Baghdad are evidence of the government’s inability to control pro-Iranian groups who want to drag Iraq into an international conflict that endangers the country’s future on behalf of Iran,” Atheel al-Nujaifi, the governor of Iraq’s Nineveh province, said last week.

At the end of August, a senior PMU leader made it clear that all Americans in Iraq would become targets in the event of a U.S. war with Iran.

“All those Americans will be taken hostage by the resistance,” said Abu Alal al-Walaei, Secretary General of Kataib Sayed al-Shuhadaa, one of the biggest PMU militias in Iraq. The interviewer was startled by the assertion.

“I will say it again,” al-Walaei said. “All Americans will be hostages of the resistance if a war breaks out, because we will stand by the Islamic Republic (of Iran).” He said he wasn’t speaking in his capacity as a PMU leader, but merely as leader of an individual “resistance faction.” More here.

Then there is Syria.

The market at al-Hol camp is a sea of unidentifiable figures clad in black, clutching their children’s grubby hands as they drag them past those haggling their wares.

Al-Hol is a sprawling encampment for those displaced from the former ISIS territory in northeastern Syria. Wind and sand blow mercilessly against tents in the scorching heat of the Syrian summer.
About 15% of the inhabitants here are foreigners, but the international community has for months neglected the camp. And as living conditions worsen, nostalgia for ISIS’ rule is beginning to brew. “We started to notice that the new arrivals were very well organized,” says Mahmoud Karo, who is in charge of the camps in northeastern Syria’s Jazira district. “They organized their own moral police. They are structured.”
“The camp is the best place to develop the new ISIS. There is a restructuring of the ISIS indoctrination,” says Karo. “You can’t differentiate between who is ISIS and who isn’t.”
Tracking down the perpetrators is difficult, he says. The women, cloaked in niqab, are nearly impossible to identify. They change tents frequently to avoid capture.
A Pentagon report by the inspector general, released last month, warned that the US and its local allies have been unable to closely monitor movements inside al-Hol. A drawdown of the US military presence in the area has allowed “ISIS ideology to spread ‘uncontested’ in the camp,” the report found.
Growing extremism in al-Hol runs parallel to signs of ISIS’ resurgence elsewhere in the region. 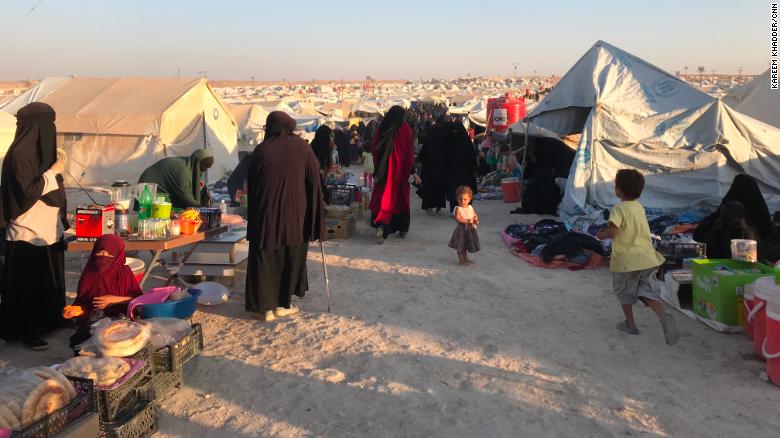 ISIS attacks in northwestern Iraq, where the group formerly ruled large swathes of territory, are becoming more frequent, and the group has claimed responsibility for other attacks in the region in recent months.
“If the situation stays like this and nations don’t help, ISIS will come back,” Khalaf warns. “We hear about it, the sleeper cells, they take advantage of the children, trying to recruit them.”
The al-Hol camp is a desolate, miserable place nations want to wish away. It stands as a legacy of yesterday’s war. More here from CNN.