When mob rule exceeds at grabbing power over law and authority, anarchy is real. Such is the case in several cities across the country where mayors have failed at the duty of public safety and protection. Sadly, the President has to issue an Executive Order to preserve historical monuments. Sure, perhaps there is a time for some to be moved and replaced but not by anarchists. It should be considered by a vote, that is the American way. 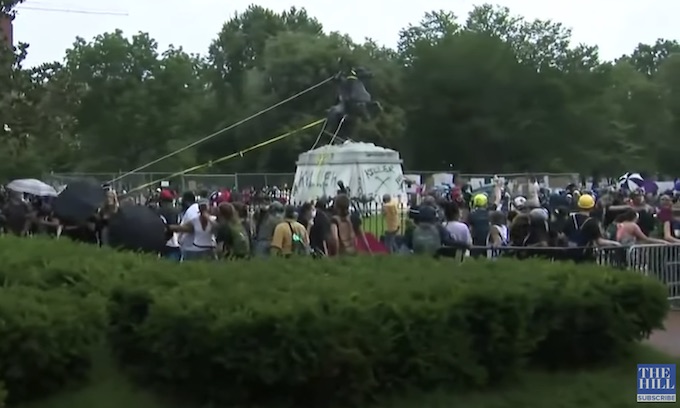 There is already a law that protects Federal property, meaning that of antiquity and assigned to the National Parks Service. So, one must challenge the mayor(s) and District Attorneys at this point. If even Al Sharpton says justice must be equal….heh…so be it…make it equal and applied as such.

“We are looking at long-term jail sentences for these vandals and these hoodlums and the anarchists and agitators, and call them whatever you want,” Trump said. “Some people don’t like that language, but that’s what they are. They’re bad people. They don’t love our country. And they’re not taking down our monuments. I just want to make that clear.”

The executive order as Trump described it appeared to be largely symbolic. Existing law already makes it criminal to destroy “any structure, plaque, statue, or other monument on public property commemorating the service of any person or persons in the armed forces of the United States.”

(a)
Whoever, in a circumstance described in subsection (b), willfully injures or destroys, or attempts to injure or destroy, any structure, plaque, statue, or other monument on public property commemorating the service of any person or persons in the armed forces of the United States shall be fined under this title, imprisoned not more than 10 years, or both.
(b) A circumstance described in this subsection is that—
(1)
in committing the offense described in subsection (a), the defendant travels or causes another to travel in interstate or foreign commerce, or uses the mail or an instrumentality of interstate or foreign commerce; or
(2)
the structure, plaque, statue, or other monument described in subsection (a) is located on property owned by, or under the jurisdiction of, the Federal Government.

Several states have laws that make it extremely difficult to remove Confederate monuments. Here are five of the strictest.

In 2015, then-Gov. Pat McCrory, a Republican, signed a bill that gave the North Carolina General Assembly full power over public “objects of remembrance.”

Earlier this week, a group of protesters toppled a Confederate statue in Durham, and on Thursday, dozens of people lined up to turn themselves in for the “crime.”

The current governor, Democrat Roy Cooper, has said that the monuments “should come down” and that he wants the state law repealed.

Alabama’s law is new. In May, Republican Gov. Kay Ivey signed the Alabama Memorial Preservation Act of 2017, which forbids “the relocation, removal, alteration, renaming, or disturbance of any architecturally significant building, memorial building, memorial street, or monument on public property which has been in place for 40 or more years.” Many of the nation’s Confederate monuments were erected in the early 20th century.

The Committee on Alabama Monument Protection created by the act approves any modification to monuments.

A Mississippi law says that statues, monuments, memorials or landmarks from previous wars cannot be removed unless they are being moved to another location or they obstruct drivers’ vision.

Rep. John Moore (R-Miss.) told WTOK-TV in Meridian that he supports the law because the memorials can used to learn about history.

“That’s one of the things about history,” Moore said. “If we cease to learn from it and don’t have reminders, we are doomed to repeat it.”

A law in the Peach State protects publicly owned military monuments from being relocated, removed, concealed, obscured or altered unless doing so would protect the monument or aid in its interpretation. A petition currently calls on state lawmakers to change the law.

In Virginia, ground zero of this latest iteration of the Confederate statue debate, it is illegal to disturb or interfere with any war monuments or memorials. There is an ongoing lawsuit over the Charlottesville City Council’s vote to remove the statue of Robert E. Lee that white supremacists and neo-Nazis gathered to defend. Opponents claim the removal of the statue is illegal under state law.