Since 1972, the United States has had a policy position titled the ‘One China Policy‘. This policy regarded that Taiwan was part of China. Since 1972, conditions have changed dramatically where Taiwan wants complete independence and should have it. China is now prepared for war to halt that independence move and it could snare the United States into a military conflict.

Without any fanfare, President Trump signed into law the Asia Reassurance Initiative Act of 2018 on New Year’s Eve. As a result of this new law, China’s President Xi told his top military authority to take responsibility for preparing and waging war.

Meanwhile, as a result of the detention of Meng Wanzhou, the CFO of Huawei in Canada and is to be prepared for extradition to the United States, a travel advisory has been issued by the U.S. State Department for Americans traveling in China for either business or pleasure.

Even more importantly, President Trump has taken a harder line on Chinese foreign investment in the United States….finally. Remember it was CFIUS that gave us Uranium One. So, with this harder line, Chinese investors planted in Silicon Valley are bailing out. Silicon Valley is complaining.

Washington demonstrated its tougher stance even before the new law was passed, when Trump in March blocked a $117 billion hostile bid by Singapore-based Broadcom Ltd (AVGO.O) to acquire Qualcomm Inc (QCOM.O) of San Diego. CFIUS said the takeover would weaken the United States in the race to develop next-generation wireless technology.

The above is an example and for more context, go here.

Just in the past few days, a U.S. guided missile destroyer traveled through the South China Sea, quite near the Paracel Island chain. The USS McCampbell did so under the ‘freedom of navigation operation essentially challenging China and China has responded by dispatching military ships and aircraft identifying the U.S. flag and to issue warnings.

China has constructed islands in the region and made them into military bases. Further, Vietnam along with other nations including Malaysia, Taiwan, the Philippines, Indonesia and Brunei also have laid claims to the disputed islands. 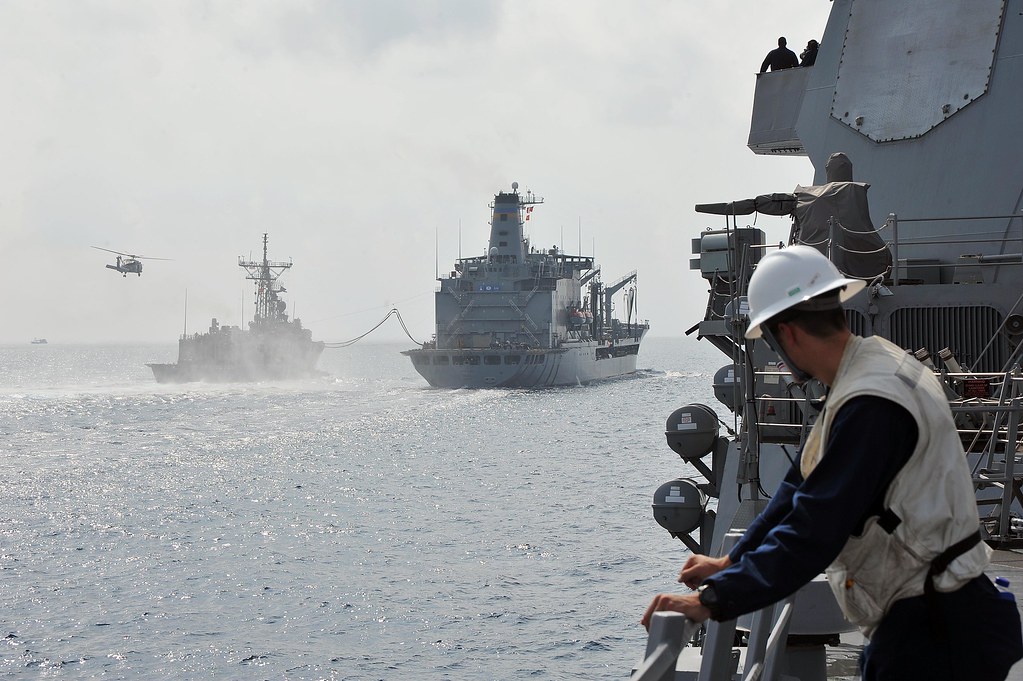 As part of the law that was signed by President Trump, a particular section is noted as follows with regard to Taiwan:

(1) to support the close economic, political, and security relationship between Taiwan and the United States;

(2) to faithfully enforce all existing United States Government commitments to Taiwan, consistent with the Taiwan Relations Act of 1979 (Public Law 96–8), the 3 joint communiques, and the Six Assurances agreed to by President Ronald Reagan in July 1982; and

(3) to counter efforts to change the status quo and to support peaceful resolution acceptable to both sides of the Taiwan Strait.

(b) Arms sales to Taiwan.—The President should conduct regular transfers of defense articles to Taiwan that are tailored to meet the existing and likely future threats from the People’s Republic of China, including supporting the efforts of Taiwan to develop and integrate asymmetric capabilities, as appropriate, including mobile, survivable, and cost-effective capabilities, into its military forces.

(c) Travel.—The President should encourage the travel of highlevel United States officials to Taiwan, in accordance with the Taiwan Travel Act (Public Law 115–135).

When it comes to freedom of navigation in the new law, this is noted:

SEC. 213.Freedom of navigation and overflight; promotion of international law.

(a) Freedom of navigation.—It is the policy of the United States—

(1) to conduct, as part of its global Freedom of Navigation Program, regular freedom of navigation, and overflight operations in the Indo-Pacific region, in accordance with applicable international law; and

(b) Joint Indo-Pacific diplomatic strategy.—It is the sense of Congress that the President should develop a diplomatic strategy that includes working with United States allies and partners to conduct joint maritime training and freedom of navigation operations in the Indo-Pacific region, including the East China Sea and the South China Sea, in support of a rules-based international system benefitting all countries.

Pray for peace, prepare for war. Imagine how complicated those trade talks really are.