Except perhaps if you challenge former CIA Director John Brennan. 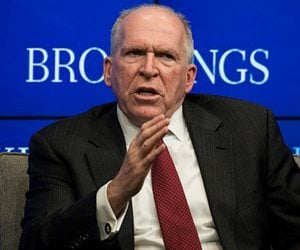 Poor lil John, he is trying to write a book and wants access to some of his CIA files and notes. That request has been denied. His book titled Undaunted: My Fight Against America’s Enemies, at Home and Abroad, slated for release in October may not have some citations or chapters in it because he has been denied access to classified material. President Trump and his security clearance was apparently never revoked. Hummm.

Meanwhile, it appears the large share of the RussiaGate operation against Donald Trump is in fact owned by the FBI. There are some CIA operatives however that do need to be explained, beginning with Eric Ciaramella.

The FBI continued to rely on intelligence from Christopher Steele, the former British spy who alleged collusion between the Trump campaign and Russia, even after the CIA warned his allegations were “very unvetted,” according to newly declassified documents.

“We would have never included that report in a CIA-only assessment because the source was so indirect. And we made sure we indicated we didn’t use it in our analysis, and if it had been a CIA-only product we wouldn’t have included it at all,” the CIA’s deputy director of analysis told the Senate Intelligence Committee in an April 21 report.

The report, declassified on Tuesday, shows that the FBI successfully pushed to include Steele’s information in a January 2017 Intelligence Community Assessment (ICA) regarding Russian interference in the 2016 election after a “bitter argument” with the CIA.

While multiple claims by Steele have since been debunked by investigators, the bureau had also used Steele’s intelligence to surveil former Trump campaign aide Carter Page.

Then- FBI director James Comey and deputy director Andrew McCabe argued that Steele’s information was relevant to the question of Russian interference in the 2016 election and lobbied the CIA and the Office of the Director of National Intelligence to include Steele’s dossier in the January 7, 2017 ICA.

On Dec. 20, 2016, Comey had tried to include Steele’s information in the body of the ICA but John Brennan, then- CIA director, “pushed back,” saying he was “very concerned about polluting the ICA with this material.” The agency eventually agreed to add the information in a two-page annex to the ICA on Dec. 29, 2016.

An assistant director for an intelligence agency supported the annex’s information regarding Russia’s election-related efforts, but warned allegations of collusion involving members of the Trump campaign was uncorroborated, according to the report.

“I can tell you that there is no information coming from [redacted] sources that would corroborate any of that,” the official told the Senate panel, adding that Steele’s Trump-related information was “very unvetted.”

Brennan told the committee that someone in the British government had called him to clarify that they were not involved in creating the dossier.