The question now is will Speaker Pelosi approve yet another impeachment inquiry operation against President Trump now that the president has been acquitted in the Senate trial on both articles of impeachment.

Listening to Congressmen Schiff and Nadler, they tell us that investigations will continue placing emphasis on future testimonies of former White House Counsel Don McGhan, former White House National Security Council advisor John Bolton and the court decision on the matter of full release of Trump’s tax returns. Further, BuzzFeed, CNN and the House have issued subpoenas for documents held sequestered by the Mueller investigation team.

In short, there is more going on with regard to the resistance movement against President Trump.

Are there counter-measures to possibly stop this constant political adventure? The short answer is yes.

There are many ramps that can be taken if not all. Senator Lindsey Graham pledged continued investigation into all things Biden. Trump’s personal attorney, Rudy Giuliani is at work on all things Biden, Ukraine and operatives in Washington DC. There are also a few key Senators, namely Grassley and Johnson that are requesting documents from the National Archives, travel documents, electronic communications and other evidence as they relate to the meeting(s) in the Obama White House that hatched the operation on protecting several within his administration relating to Ukraine, Biden and other DNC personnel and diplomats.

Indeed there are other real key items underway including Senator Rand Paul pursuing Eric Ciaramella. It appears he is not going to let up and rightly so.

On the floor of the U.S. Senate, Sen. @RandPaul reads and displays the question which Chief Justice Roberts declined to read last week during the Impeachment Trial. pic.twitter.com/nxZb255IbU

There is the case involving former FBI officials, Andrew McCabe, Peter Strzok and Lisa Page. Then we cannot overlook the most awaited case that U.S. Attorney John Durham has in his sphere, investigating all things related to Crossfire Hurricane, the dossier, the DNC, Hillary Clinton, Perkin Coie, Marc Elias and foreign interference. 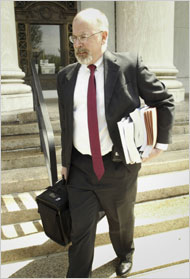 Without any real media notice due to impeachment operations is that John Durham brought on a new well respected criminal attorney, Sarah Karwan. Her specialty is financial fraud, money laundering, public corruption and national security/cyber crime. The status is unclear at this point in the investigation relating to Kevin Clinesmith, the former FBI lawyer that altered a document used in the FISA warrant applications on Carter Page. A great deal of evidence was brought forth in the Horowitz Inspector General report and it is noted that IG Horowitz is collaborating with the Durham team and the Senate team led by Lindsey Graham. We cannot forget several others under scrutiny including Stephan Halper, John Brennan and James Clapper. Where is Joseph Mifsud? Only John Durham knows as there is testimony from Mifsud or about him acquired by Durham during Durham’s travels to Italy.