Written Statement of AG Bar… by Fox News on Scribd

Primer: This is going to be a contentious session slated to last up to 4 or more hours. Why?

“I think the weight of the evidence and of what’s happened leads to that conclusion,” Nadler said.

Two other Democrats, Reps. Steve Cohen of Tennessee and Bill Pascrell of New Jersey, have called for Barr’s impeachment.

Items to be covered will be RussiaGate, the militant demonstrations around the country, criminal statistics, Roger Stone and more. 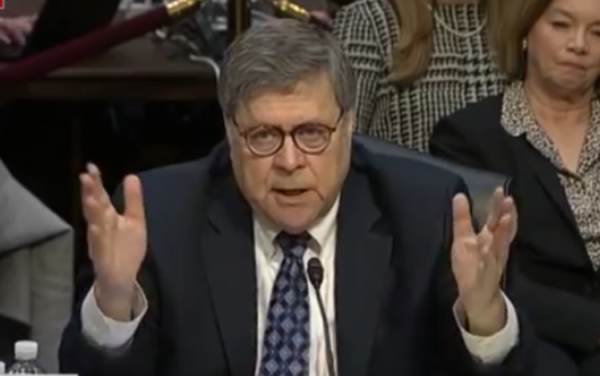 Chairman Nadler, Ranking Member Jordan, Members of the Committee, I am pleased to  be here this morning. I accepted an invitation to testify before this Committee in late March, but it was postponed as a result of the pandemic that continues to pose challenges to us all. I know some other hearings this week have been postponed to honor your late colleague, Congressman John Lewis of Georgia. On behalf of the Department of Justice, I want to pay my respects to Congressman Lewis, an indomitable champion of civil rights and the rule of law. I think it is especially important to remember today that he pursued his cause passionately and successfully with an unwavering commitment to nonviolence. We are in a time when the political discourse in Washington often reflects the politically divided nation in which we live, and too often drives that divide even deeper. Political rhetoric is inherent in our democratic system, and politics is to be expected by politicians, especially in an election year. While that may be appropriate here on Capitol Hill or on cable news, it is not acceptable at the Department of Justice. At the Department, decisions must be made with no regard to political pressure—pressure from either end of Pennsylvania Avenue, or from the media or mobs. Ever since I made it clear that I was going to do everything I could to get to the bottom of the grave abuses involved in the bogus “Russiagate” scandal, many of the Democrats on this Committee have attempted to discredit me by conjuring up a narrative that I am simply the President’s factotum who disposes of criminal cases according to his instructions. Judging from the letter inviting me to this hearing, that appears to be your agenda today. So let me turn to that first. As I said in my confirmation hearing, the Attorney General has a unique obligation. He holds in trust the fair and impartial administration of justice. He must ensure that there is one standard of justice that applies to everyone equally and that criminal cases are handled even-handedly, based on the law and the facts, and without regard to political or personal considerations. I can tell you that I have handled criminal matters that have come to me for decision in this way.

The President has not attempted to interfere in these decisions. On the contrary, he has told me from the start that he expects me to exercise my independent judgment to make whatever call I think is right. That is precisely what I have done. From my experience, the President has played a role properly and traditionally played by Presidents. Like his predecessors, President Trump and his National Security Council have appropriately weighed in on law-enforcement decisions that directly implicate national security or foreign policy, because those decisions necessarily involve considerations that transcend typical  prosecutorial factors. Moreover, when some noteworthy event occurs that potentially has legal ramifications – such as leaks of classified information, potential civil rights abuses by police, or illegal price fixing or gouging – the President has occasionally, and appropriately, confirmed that the Department is aware of the matter. But the handling of the matter and my decisions on criminal matters have been left to my independent judgment, based on the law and fact, without any direction or interference from the White House or anyone outside the Department. Indeed, it is precisely because I feel complete freedom to do what I think is right that induced me serve once again as Attorney General. As you know, I served as Attorney General under President George H. W. Bush. After that, I spent many years in the corporate world. I was almost 70 years old, slipping happily into retirement as I enjoyed my grandchildren. I had nothing to prove and had no desire to return to government. I had no prior relationship with President Trump. But as an outsider I became deeply troubled by what I perceived as the increasing use of the criminal justice process as a political weapon and the emergence of two separate standards of  justice. The Department had been drawn into the political maelstrom and was being buffeted on all sides. When asked to consider returning, I did so because I revere the Department and believed my independence would allow me to help steer her back to her core mission of applying one standard of justice for everyone and enforcing the law even-handedly, without partisan considerations. Since returning to the Department, I have done precisely that. My decisions on criminal matters before the Department have been my own, and they have been made because I  believed they were right under the law and principles of justice. Let me turn briefly to several pressing issues of the day. (…) Read on here.