Update –> There is a BIG mess going on in DC about how ‘crack pipes’ are part of the ‘safe smoking kits’….HHS Secretary and the White House are saying that crack pipes are not included in the distribution…yeah okay…but hold on fact checkers….upon doing more checking seems our own government was funding a crack pipe study in Mexico….you know that Dr. Fauci agency….now we may know where this all started.

This is the page regarding the crack pipe study we paid for in 2019 in Mexico.

This is the screenshot in case it goes away…giggles: 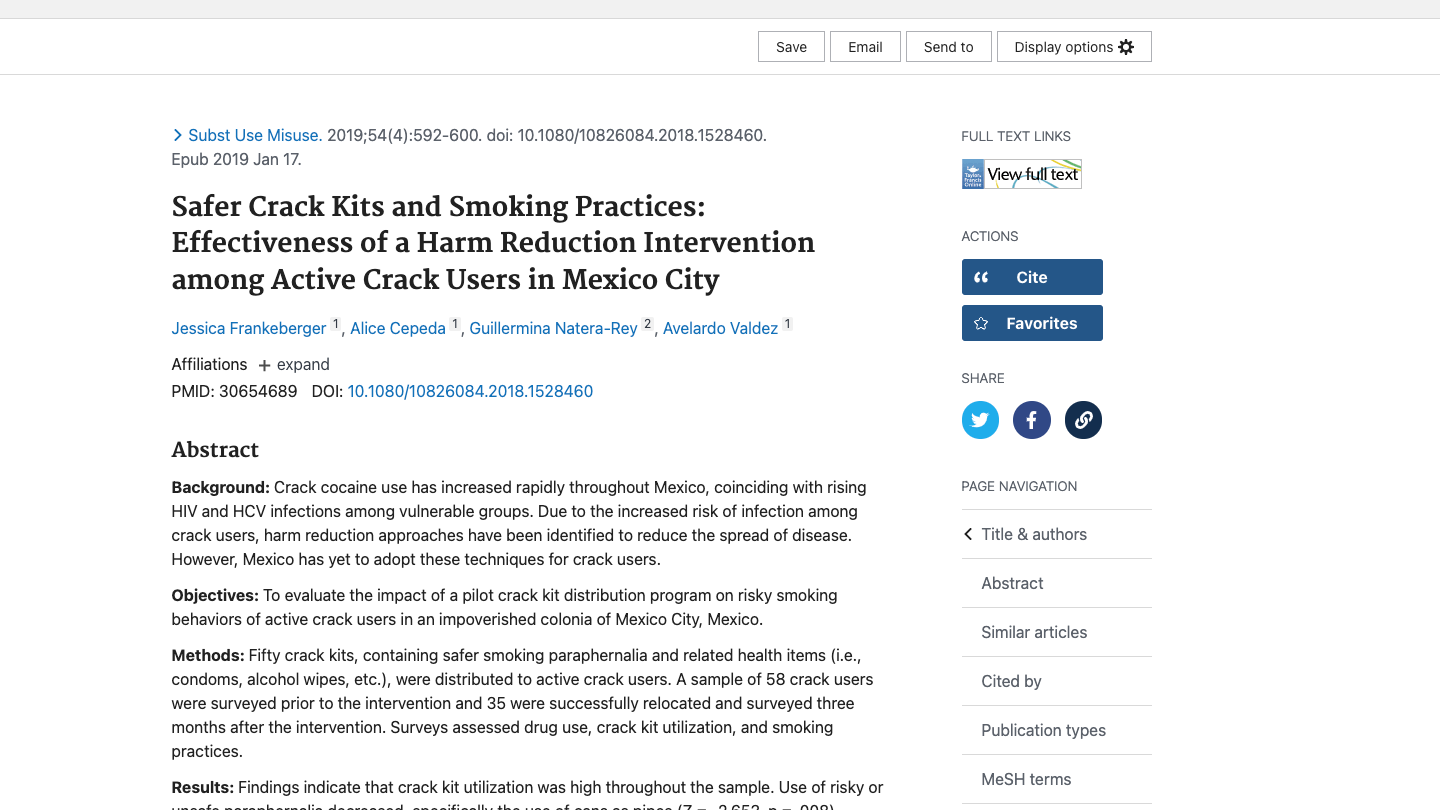 When government become an illicit drug distributor….a bridge too far?

Source: In the name of harm reduction, the substance abuse arm of the Health and Human Services Agency will begin providing funds to help distribute “safe smoking kits” for the consumption of various illicit drugs like crack cocaine and crystal meth.

A grant program funded by the Biden administration will furnish syringes and “safe smoking kits” among other items as a means to advancing equity.

The deadline for the $30 million program is Monday, with the Department of Health and Human Services distributing funds to nonprofit groups and local governments. Among the items the grant will pay for are syringes and “safe smoking kits/supplies.”The kits will allow users to smoke crack cocaine, crystal methamphetamine, and other illicit substances. source

The Drug Enforcement Administration enforces the United States’ controlled substance laws and regulations and aims to reduce the supply of and demand for such substances.

Support for drug demand reduction and prevention programs through educational and other campaigns and initiatives including the Red Ribbon Campaign, National Takeback Day, Operation Engage and One Pill Can Kill.

How does the Department of Justice of which the DEA is the authority square with this exactly? We now have local, state and the Federal governments contributing to the drug epidemic problem plaguing the whole country. Policymakers are just nuts and exactly how is this objective contributing to a positive outcome?

Harm reduction efforts, like testing for infectious diseases, needle exchanges and naloxone distribution programs, are nothing new, but providing federal taxpayer funds for paraphernalia used to smoke drugs is.

Drug overdoses are the leading cause of death for adults 18-45 and this is how the Biden admin is responding: https://t.co/rI6DxzazTv

An HHS spokesperson reportedly confirmed to The Washington Free Beacon these “safe smoking kits” will provide pipes for the consumption of “any illicit substance” to reduce the risk of infection, which can potentially occur through cuts and sores.

Seattle previously distributed meth pipes to residents in 2015, according to Reuters, but it’s reportedly hard to tell the benefit such a program can have.

“It is plausible the intervention could be effective,” said Matthew Golden, a Seattle and King County disease control official and a University of Washington medical professor, when the program was launched. “It’s simply an unstudied idea.”

One nonprofit said it had conducted research which determined meth users would be less likely to inject the drug if given access to pipes, but there is little evidence to back up such a claim, Reuters reported.

San Francisco has handed out crack pipes as well, according to local reporting, where allegedly an estimated 25,000 people actively inject drugs.

The SAMHSA grant’s $30 million will be spread across three years, and the money will be prioritized for “underserved communities that are greatly impacted by substance use disorder (SUD).”

Other measures funded by the grant include harm reduction vending machines – including the contents to stock them, infectious disease test kits and medicines, vaccination services and wound care supplies.

The National Desk reached out to SAMHSA to see if the “safe smoking kits” will also be available at harm reduction vending machines across the country but did not receive an immediate response in time for publication. This story will be updated if a response is obtained.