Defense Minister Annegret Kramp-Karrenbauer said Germany would spend 2% of its economic output on defense by 2031, belatedly reaching the goal set by NATO leaders at a 2014 summit, months after Russia’s annexation of Ukraine’s Crimea peninsula.

“NATO is and will remain the anchor of European security. But it is also clear that Europe must increase its own complementary ability to act,” Kramp-Karrenbauer told a private event to honor NATO Secretary-General Jens Stoltenberg on Wednesday night.

Germany has prohibited Estonia from shipping weapons to Ukraine. Is Germany agreeable to a Russia/Ukraine military conflict and the destruction of a country’s sovereignty while casualties and refugees are likely? Think about that. Did Germany ever criticize Germany for the poison deaths by Russia of those living in the U.S. and in Britain? How about when Russia shot down a commercial airliner killing all the passengers? What about the countless times Russia threatens allied naval vessels or buzzes military aircraft in sovereign airspace? We also cannot overlook Russian hackers when they struck Ukraine several times. Hello Germany…you out there?

Meanwhile, beginning with Chancellor Merkel and now with Olaf Scholz, Germany has gone more rogue if that is possible which means they are ‘all-in’ with Russia mostly due to needing energy. Under Merkel, Germany is terminating nuclear power as an energy resource and is going in with natural gas and bio-mass along with on shore and off shore wind. Fully going green including solar. 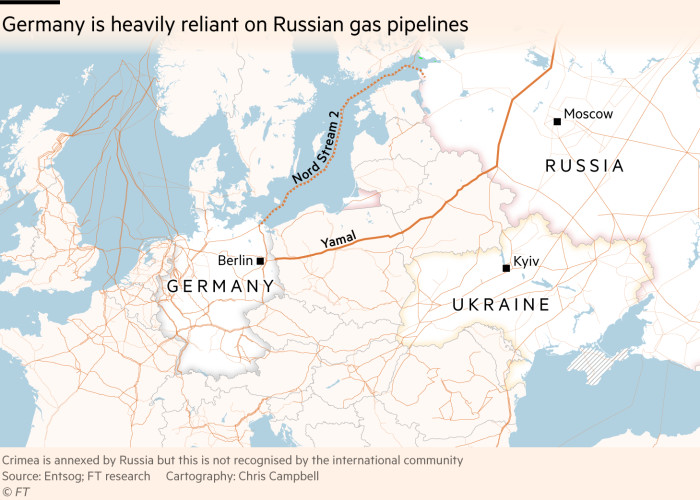 Meanwhile, remember a few years ago when Germany took in millions of Syrian refugees? Germany has been facing a labor shortage for many years so rather than crafting a domestic policy for the good of Germans, it was decided that refugees and migrants were the solution and this is not a new phenomenon as it began years before with Turks. An aging workforce and a low birthrate caused Germany to go outside the country to get workers. Audi and Mercedes considered this move to be an economic miracle but while some of that has been positive, the larger picture tells another story. Language skills, education, work ethics, bureaucracy, culture and training has been a bigger problem.

Oh….exactly what countries are the best customers for German cars? Yup….Russia and especially China….go figure. That Chinese human rights violation of the million Uighurs in prison and working in slave conditions is not exclusive to China by the way….as German companies profit from exploiting Uighur slave labor. Ever heard of Hugo Boss or Aldi? Yup and then there are American companies doing much the same…such as Nike or Puma, Amazon and Abercrombie and Fitch. Details here.

For more details on the raw truths go here.

Germany’s economic condition relies fully on raw materials from foreign countries and it’s supply chain is much worse than most of Europe or the United States…for this reason, we see how Germany side-steps the NATO doctrine while a few other countries including Finland and Georgia would be good replacements if they meet the fundamental requirements, perhaps even Bosnia and Herzegovina and least of all Ukraine.

NATO membership is potentially open to all of Europe’s emerging democracies that share the alliance’s values and are ready to meet the obligations of membership.

There is no checklist for membership.

Candidates for membership must meet the following five requirements:

–New members must be making progress toward a market economy.

–Their military forces must be under firm civilian control.

–They must be good neighbors and respect sovereignty outside their borders.

–They must be working toward compatibility with NATO forces.

Again, while these criteria are essential, they do not constitute a checklist leading automatically to NATO membership.

New members must be invited by a consensus of current members.

Decisions to invite new members must take into account the required ratification process in the member states. In the case of the United States, decisions are made in consultation with Congress.