The US Navy sent two warships to a disputed archipelago in the South China Sea on May 28 in its latest symbolic protest against China’s claims there.

Reuters first reported that the USS Higgins and the USS Antietam ventured within 12 miles of the Paracel Islands in a demonstration the Pentagon calls a “freedom of navigation operation” or FONOP. The move signals US rejection of China’s claims of political control in the South China Sea.

The objective of their sail-by was a speck of land called “Woody Island,” where China has developed airstrips and port facilities in recent years as part of a broader strategy of establishing bases in these islands to demonstrate and exercise its political claims. This spring, China landed strategic bombers capable of carrying nuclear weapons on the island, a symbolic display of its deterrent power, and satellite imagery showed the arrival of surface-to-air missiles this month.

The Vietnamese government protested China’s move as a violation of its sovereign claim to the islands—exactly the language used by China to protest US actions today after sending its own warships to warn away the Americans. The island is one of many that lay behind the “nine dash line,” a diplomatic term of art for China’s political vision for the South China Sea, which is at the center of a web of claims by nearby nations: 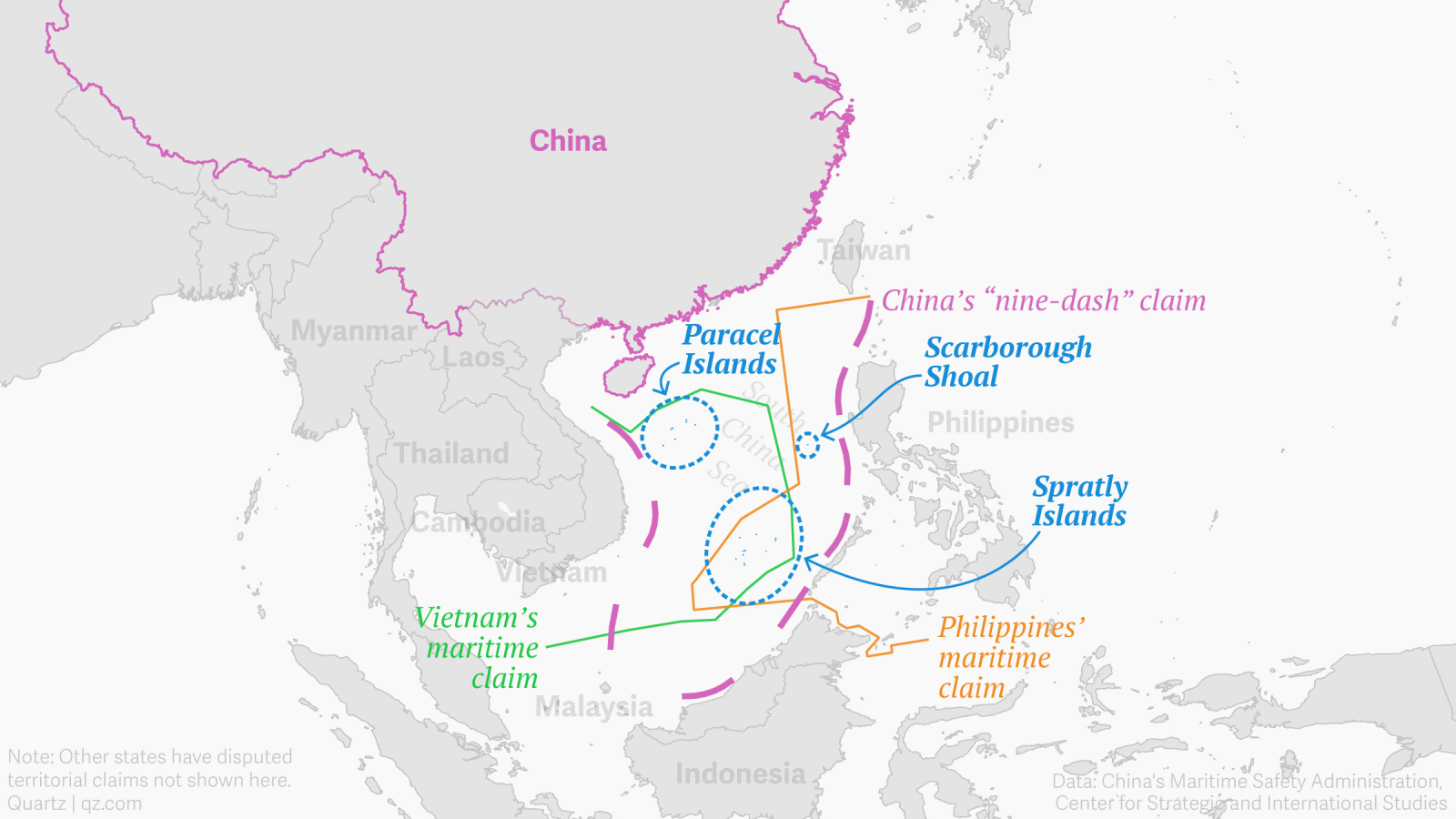 In March, the US sent a destroyer on a FONOP to the Spratly Islands. In response, China increased its naval activity there, including a parade of warships that was also captured by Planet satellites. Tensions in the South China Sea have been simmering for years, but are now complicated by China’s role in North Korean nuclear talks and growing trade disputes with the Trump administration.

Surveillance photos suggest it has already broken its promise to not land military aircraft on its artificial islands. And there are claims the facilities have begun jamming US forces.

These are military combat transport aircraft, built to rapidly deploy special forces troops and munitions to a battlefield.

The news comes amid reports that electronic warfare equipment recently installed on the islands were last week directed at disrupting the passage of the United States Navy’s aircraft carrier, the USS Roosevelt.

Mischief Reef is within the internationally recognised 370km exclusive economic zone (EEZ) that applies to the Philippines. It is one of seven artificial islands arbitrarily constructed within the disputed Spratly Islands cluster. Three of these have large, 3km long military-grade runways.

China refuses to accept the UN economic zone standard, established after World War II to reduce international tensions, as well as an adverse ruling in 2016 by an international court of arbitration on the matter.

Instead, it insists it holds sovereign territorial rights over the whole 3.5 million-square-kilometre South China Sea, right up to 20km of the coasts of bordering nations including Taiwan, Vietnam, Borneo and Malaysia.

“If they could land transports now, in the future they might want to land more provocative and destabilising types of assets such as fighter jets and bombers,” research fellow Collin Koh at Singapore’s Rajaratnam School of International Studies’ Maritime Security Program, told The Inquirer.

Such electronic warfare devices are designed to block an opponent’s radar from ‘seeing’ what is going on, and prevent ships and aircraft from communicating with each other and the outside world.

Now, a US Navy pilot appears to have confirmed that these facilities are active.

Serving aboard the USS Roosevelt aircraft carrier which passed through the South China Sea to visit the Philippines last week, he implied the immense warship and its aircraft had been targeted by these disruptive devices.

“The mere fact that some of your equipment is not working is already an indication that someone is trying to jam you.” the pilot told the Philippines’ GMA News Online.

“And so we have an answer to that,” the naval officer cryptically told the journalist invited aboard for a tour of the ship.

DELVE DEEPER: How does China’s military compare with the US?

The USS Roosevelt had passed through the disputed waterway at the same time as a major Chinese naval parade was being staged on behalf of its new President-for-life, Xi Jinping.

The pilot reportedly flew one of the US Navy’s EA-18G Growler aircraft — a modified Super Hornet intended to provide electronic warfare support for accompanying ships and aircraft.

“This is not something that the US will look kindly on or think they can overlook.” military analyst Omar Lamrani at geopolitical think-tank Stratfor told Business Insider .

Lamrani said that even though electronic jamming was nothing like shooting a weapon, such activity was provocative and “could lead to an escalatory pattern that could be negative for both sides.” More here.