So, after the declaration by President Trump announcing that Jerusalem is the historical capitol of Israel, protests continue against the West. Truth be told, at least three previous presidents all made the same declarations. A peace deal with the Palestinians is a fool’s errand.

We are to believe that President Trump is not sensitive to the disputes, history and territory? C’mon really?

*** Check out this judge’s decision as a primer:

Gothenburg, December 12 – A magistrate in this Scandinavian city has ruled that the perpetrators of two Molotov cocktail attacks against Jewish houses of worship in the last three days may not be prosecuted under criminal law, as they were exercising their legal right to freedom of expression.

Judge Lars Ferwerds ordered fourteen men detained Saturday and Monday for the firebomb attack be released immediately and the charges against them dropped this morning, and criticized the police for infringing on the men’s rights. The group had participated in assaults on synagogues to protest US President Donald Trump’s recognition of Jerusalem as Israel’s capital. The attack forced dozens of Jews inside one of the the buildings to seek shelter in the basement as they awaited rescue.

“Shame on the police for limiting freedom of expression,” pronounced the judge. “European civilization has advanced to the point where vehement disagreement is now treated as a legitimate position, not to be repressed.”

Lawyers for the defendants praised the judge’s decision. “It has long been recognized that Muslim anger may not be restrained by law enforcement,” stated a pleased Dimi Svensen, who represents four of those arrested. “This is especially the case when the anger is directed merely at Jews. The Court was correct in admonishing the police that the antisemitism is even more venerable and sacrosanct than all other notions in European legal tradition.”

On Saturday, December 9, masked men threw firebombs at a synagogue in Gothenburg, Sweden. The attack took place shortly after 10:00 pm, at a time when about thirty children and teenagers were attending a party at the Jewish Center adjoining the main building. When the assault began, the guards rushed them into the cellar, and finally allowed them to go home at about 11:30 pm. (Guards, of course, are a fixture at European synagogues these days.) A mother of one of the girls at the party received a text message from her daughter saying that she was scared and that there was a smell of gasoline. More here. 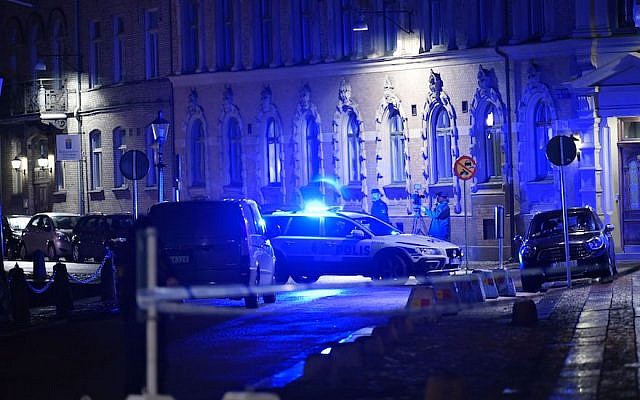 So, a previous policyholder with the term of GW Bush and Barack Obama, Farah Pandith, takes the position that under Trump, America is at war with Islam.

Pandith was the first person to hold the position of Special Representative to Muslim Communities for the US State Department under Secretary Clinton. Perhaps she is cool with that judge’s decision huh?

But hold on….check out what Saudi Arabia just did…

TEHRAN (FNA)– Saudi Crown Prince and de facto ruler Mohammed bin Salman has laid increasing pressure on Palestinian President Mahmoud Abbas to give up his quest for the Palestinian refugees’ right of return and for making Quds the capital of a Palestinian state, an Arab media outlet disclosed.

“Bin Salman has told Mahmoud Abbas to forget about the Quds case and the refugees’ right to return to their country and start a bid to establish a state in Gaza,” the Arabic-language al-Arabi al-Jadid news website reported on Tuesday, adding that the de facto ruler has promised “Abbas huge financial aid in return”.

To get rid of the difficult conditions prevailing over the meeting with the Saudi crown prince, Abbas has asked bin Salman to present his offer in written so that he could put it under discussion at a meeting of the central committee of the Palestine Liberation Organization (PLO), added the report.

Earlier, Reuters had also reported that bin Salman had proposed $100bln to Abbas if he agreed with the recent US President Donald Trump’s decision to recognize Jerusalem al-Quds as Israel’s capital.

The US president last Wednesday defied global warnings, and said Washington formally recognizes Jerusalem al-Quds as the “capital” of Israel, and will begin the process of moving its embassy to the occupied city, breaking with decades of American policy despite widespread international opposition.

In anticipation of Trump’s move, 151 members of the UN General Assembly voted last week to adopt a rare resolution that denounced Israel as the “occupying power” of Jerusalem al-Quds, a city that is holy to Muslims, Christians, and Jews alike.

The city has seen heightened tensions since 2015, when the Israeli military introduced restrictions on the entry of Palestinian worshipers into the al-Aqsa Mosque — Islam’s third holiest site.

Over 300 Palestinians have lost their lives at the hands of Israeli soldiers ever since.

Israel lays claim to the entirety of al-Quds (Jerusalem) as its capital while Palestinians want its Eastern part as the capital of a future state for themselves.

Palestinian leaders have warned that the potential relocation would fuel strong reaction in the region and deliver a death blow to any prospect of resolving the Israeli-Palestinian conflict.

Trump’s move which overturns decades of US foreign policy has triggered a fresh wave of unrest in the Middle East.

*** Then going over to the Palestinian capitol of Ramallah, there was a poll taken. Can you guess the results?

More than 90% view the US recognition of Jerusalem as capital of Israel as a threat to Palestinian interests and the largest percentage demands a strong response that includes a return to an armed intifada. Moreover, the overwhelming majority does not trust Trump’s peace intentions, nor trust the major Arab allies of the US, and 70% demand Abbas’ resignation, and a majority demands the resignation of the reconciliation government if it does not immediately lift the PA sanctions imposed on the Gaza Strip.

between 7-10 December 2017. The poll was conducted one day after the

announcement by President Trump that he is recognizing Jerusalem as the

between Palestinian protesters and Israeli soldiers throughout the West Bank

and the Gaza Strip. By then, the Palestinian Authority has already publicly

condemned the US measure and announced cessation of peace-related contacts

with Washington. On the domestic front, reconciliation efforts continued to

will take place before the end of 2018. This press release addresses these

issues and covers other matters such as general conditions in the

selected locations. Margin of error is 3%.