The President officially submitted his budget proposal to Congress today, with a first-ever section on curbing waste, fraud, duplication, and abuse in the federal government. 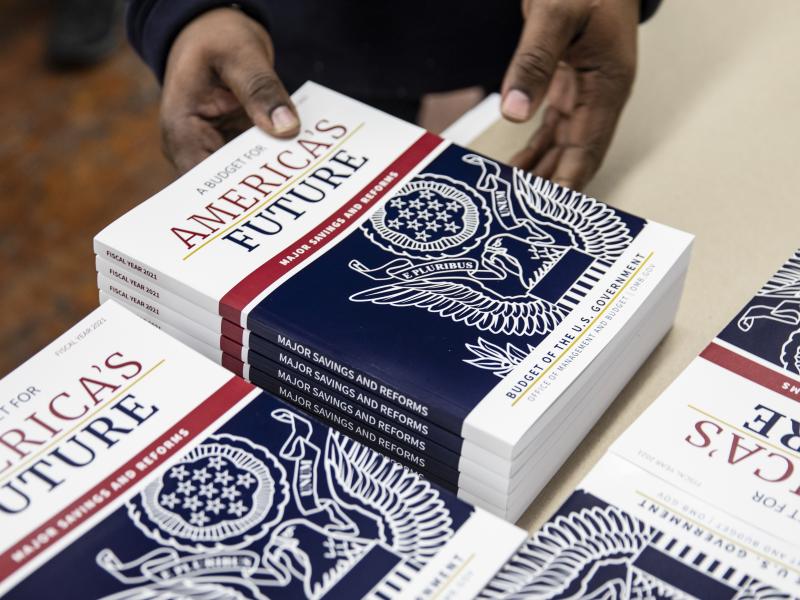 The budget calls for eliminating the following programs entirely:

The administration also identified several categories of government spending in desperate need of additional government oversight, including travel, employee conferences or workshops, subscriptions, marketing, entertainment, office refreshments and end-of-year “Use It or Lose It” spending. The chapter cites expenditures by 67 federal agencies from December 30-31, 2018 which totaled $97 billion and included more than $15 million worth of fine china, lobster, alcohol, recreational, musical, and workout equipment.

Yes, it’s budget day on Capitol Hill as we all return to semi-normalcy after spending the last four months consumed with impeachment. Both the House and Senate have hearings this week to discuss the president’s budget.

President Trump is proposing to balance the federal budget within 15 years, “shrink” the federal government and extend food stamp work requirements to Medicaid and housing programs in a $4.8 trillion spending plan being released Monday.

The plan would reduce spending by $4.4 trillion equally from discretionary and mandatory programs such as Medicare over the next decade.

The plan also includes $2 billion for the border wall, with officials saying the administration is approaching 80% of the money needed to finish the wall.

The president’s budget for fiscal 2021 would cut foreign aid by 21% and reduce the Environmental Protection Agency’s funding by 26% while targeting the Education Department for smaller cuts.

The Commerce Department budget would be cut by 37%. Officials largely attribute that reduction to completion of the census. The Department of Housing and Urban Development is slated for a cut of 15% in a proposal that includes $2.8 billion for homelessness assistance grants.

Spending for the Centers for Disease Control and Prevention would be cut 9%, and $4.3 billion would be targeted for battling infectious diseases.

Overall, nondefense spending would be cut 5% to $590 billion, below the level the White House and congressional Democrats agreed to in the current two-year budget deal.

Mr. Trump also proposes to make permanent the tax cuts of 2017. Senior administration officials who gave a preview to The Washington Times and other news outlets said the election-year proposal is aimed partly at the perception that Mr. Trump hasn’t tried to curtail federal spending, with annual deficits rising to more than $1 trillion in his first term.

“We’re trying to make the case that the president cares about spending and has cared about spending,” a senior administration official said. “He’s been doing this since his very first budget. This is now the fourth budget. Many of these [spending] reforms have been in each and every one of them. We do need Congress. Congress has not been there.”

“We’re going to have a national election that will hopefully decide that Congress is going to be on the side of the American people along with other taxpayers who balance their family budgets,” the senior official said. “We’re making the argument that deficit reduction is really important.”

The plan to reach a balanced budget relies on an optimistic economic forecast of 3% annual growth, significantly faster than the 2.3% rate in 2019.

Officials said about half of the proposed savings over a decade would come from reforms or from eliminating programs deemed wasteful in entitlements such as Medicaid and Social Security. They said benefits won’t be affected and that the savings would come from cutting waste and from other savings such as lowering prescription drug prices under Medicare ($130 billion).

Savings of $292 billion would come from reforming Medicaid and other safety net programs, for example by eliminating improper payments to people who have died. Spending on Medicare and Medicaid would still increase.

“The president is proposing more mandatory savings and reforms than any other president in history,” an official said. “He does protect Social Security and Medicare beneficiaries in those programs; he totally meets that commitment.”

The president tweeted on Saturday, “We will not be touching your Social Security or Medicare in Fiscal 2021 Budget. Only the Democrats will destroy them by destroying our Country’s greatest ever Economy!”

In the past two years, Congress has provided only $2.65 billion for the border wall out of the $18 billion the administration said it needed. Mr. Trump declared a state of emergency in February 2019 to move money from military construction projects and counternarcotics programs to get more money. The administration has shifted $6.7 billion from those programs and plans to divert another $7.2 billion this year.

The proposal would save taxpayers $300 billion over 10 years by expanding the 20-hour-per-week work requirement for food stamp recipients to Medicaid and housing programs, plus expanding it in the food stamp program, officials said.

The administration said in a statement that part of the spending plan involves “shrinking the federal government to its proper size” by calling for overall reductions of about 2%.

Deficits have risen each year under Mr. Trump, who came into office criticizing former President Barack Obama for failing to get government borrowing under control and pledging that he would balance the budget himself in eight years.

When Mr. Obama left office, the annual deficit was down to about $585 billion after three consecutive $1 trillion deficits at the start of his presidency.

The trend continued in the wrong direction in the first three months of fiscal 2020 as the deficit widened to $356.6 billion and was on pace to exceed $1 trillion by the end of the year.

The fiscal 2021 budget proposal would trim the deficit to $966 billion next year and eliminate annual deficits by 2035, a senior administration official said.

Mr. Trump threatened to veto a massive spending bill in March 2018 that he said included unnecessary extras added by Democrats. He said he acquiesced because the measure was vital to rebuilding the military, but he warned that he wouldn’t tolerate such wastefulness going forward.

He fought with Democrats into a government shutdown in late 2018 over funding for the border wall. In August, Mr. Trump struck a sweeping two-year spending deal with Democrats that lifted the nation’s borrowing limit through July 2021, raised spending by more than $320 billion and put off the next potential fight over spending until after the November elections.

That deal is projected to add nearly $2 trillion in debt over the next decade.

House Speaker Nancy Pelosi, a California Democrat whose troops have teamed up with Mr. Trump to increase deficit levels, said the president has no credibility on fiscal responsibility. They point to the 2017 tax cuts that passed with no Democratic votes.

“During the eight years of President Obama’s presidency, he reduced the deficit by $1 trillion,” Mrs. Pelosi said last week. “Instead, this administration … increased the national debt by $2 trillion.”