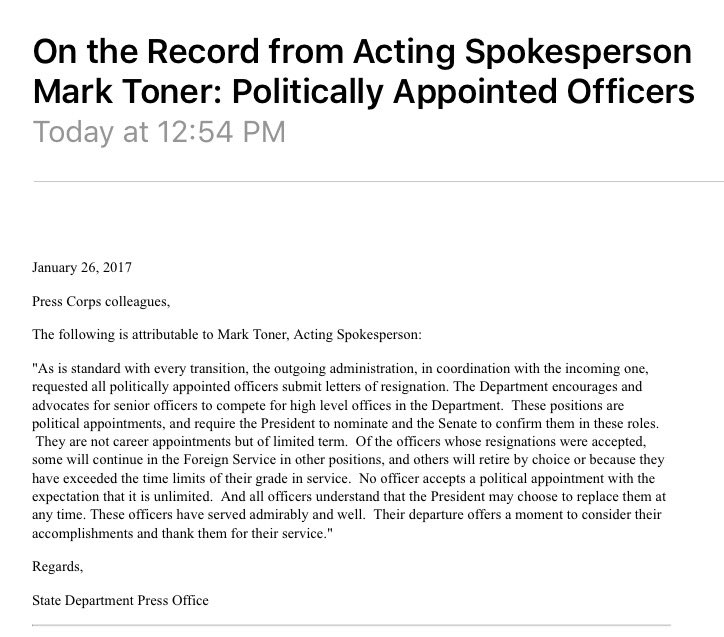 Rex Tillerson was there at Foggy Bottom getting a lay of the landscape, when the resignations turned in last week became effective today as there was a walk out. And YES, the most corrupt official at the State Department remaining after John Kerry left is Patrick Kennedy, and he is gone too…YIPPEE.

It is real awesome that Victoria Nuland has left too.

CBS: State Department posts occupied by other career diplomats have also been left vacant. Victoria Nuland is one of the people leaving. Nuland was the Assistant Secretary of State responsible for Russia and Eurasia Policy at the State Department, and is known for her hardline view on Russia. Linda Etim, a political appointee handling USAID and African affairs, has also left the State Department.

Tillerson was actually inside the State Department’s headquarters in Foggy Bottom on Wednesday, taking meetings and getting the lay of the land. I reported Wednesday morning that the Trump team was narrowing its search for his No. 2, and that it was looking to replace the State Department’s long-serving undersecretary for management, Patrick Kennedy. Kennedy, who has been in that job for nine years, was actively involved in the transition and was angling to keep that job under Tillerson, three State Department officials told me.

Then suddenly on Wednesday afternoon, Kennedy and three of his top officials resigned unexpectedly, four State Department officials confirmed. Assistant Secretary of State for Administration Joyce Anne Barr, Assistant Secretary of State for Consular Affairs Michele Bond and Ambassador Gentry O. Smith, director of the Office of Foreign Missions, followed him out the door. All are career foreign service officers who have served under both Republican and Democratic administrations.

In addition, Assistant Secretary of State for Diplomatic Security Gregory Starr retired Jan. 20, and the director of the Bureau of Overseas Building Operations, Lydia Muniz, departed the same day. That amounts to a near-complete housecleaning of all the senior officials that deal with managing the State Department, its overseas posts and its people.

Several senior foreign service officers in the State Department’s regional bureaus have also left their posts or resigned since the election. But the emptying of leadership in the management bureaus is more disruptive because those offices need to be led by people who know the department and have experience running its complicated bureaucracies. There’s no easy way to replace that via the private sector, said Wade.

“Diplomatic security, consular affairs, there’s just not a corollary that exists outside the department, and you can least afford a learning curve in these areas where issues can quickly become matters of life and death,” he said. “The muscle memory is critical. These retirements are a big loss. They leave a void. These are very difficult people to replace.”

Whether Kennedy left on his own volition or was pushed out by the incoming Trump team is a matter of dispute inside the department. Just days before he resigned, Kennedy was taking on more responsibility inside the department and working closely with the transition. His departure was a surprise to other State Department officials who were working with him.

One senior State Department official who responded to my requests for comment said that all the officials had previously submitted their letters of resignation, as was required for all positions that are appointed by the president and that require confirmation by the Senate, known as PAS positions.

“No officer accepts a PAS position with the expectation that it is unlimited. And all officers understand that the President may choose to replace them at any time,” this official said. “These officers have served admirably and well. Their departure offers a moment to consider their accomplishments and thank them for their service. These are the patterns and rhythms of the career service.”

Ambassador Richard Boucher, who served as State Department spokesman for Colin Powell and Condoleezza Rice, said that while there’s always a lot of turnover around the time a new administration takes office, traditionally senior officials work with the new team to see who should stay on in their roles and what other jobs might be available. But that’s not what happened this time.

The officials who manage the building and thousands of overseas diplomatic posts are charged with taking care of Americans overseas and protecting U.S. diplomats risking their lives abroad. The career foreign service officers are crucial to those functions as well as to implementing the new president’s agenda, whatever it may be, Boucher said.

“You don’t run foreign policy by making statements, you run it with thousands of people working to implement programs every day,” Boucher said. “To undercut that is to undercut the institution.”

By itself, the sudden departure of the State Department’s entire senior management team is disruptive enough. But in the context of a president who railed against the U.S. foreign policy establishment during his campaign and secretary of state with no government experience, the vacancies are much more concerning.

Tillerson’s job No. 1 must be to find qualified and experienced career officials to manage the State Department’s vital offices. His second job should be to reach out to and reassure a State Department workforce that is panicked about what the Trump administration means for them.