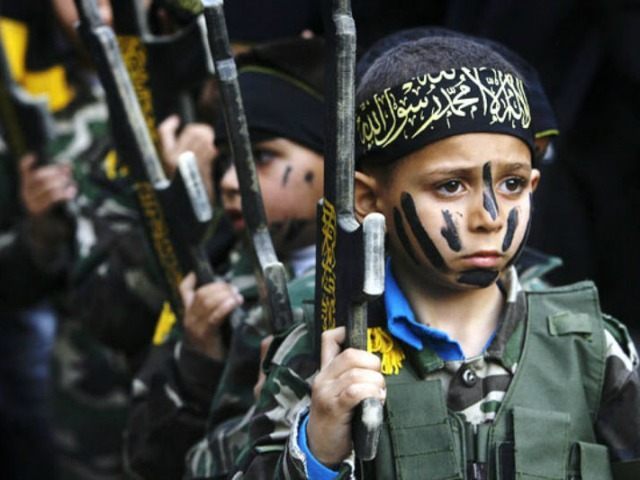 The United Nations has a list of shame, fine but it is merely a list and a gesture.

Child soldiers are children (under 18) who are used for military purposes.

Some child soldiers are used for fighting – they’re forced to take part in wars and conflicts, forced to kill, and commit other acts of violence. Some are forced to act as suicide bombers. Some join ‘voluntarily’, driven by poverty, sense of duty, or circumstance.

Other children are used as cooks, porters, messengers, informants, spies or anything their commanders want them to do. Child soldiers are sometimes sexually abused.

Afghanistan, Central African Republic, Democratic Republic of Congo, India, Myanmar, the Occupied Palestinian Territory, Thailand, the UK and Yemen all use child soldiers, meaning on person under the age of 18.

photo (attribution for photo removed due to malware alert)

WASHINGTON (Reuters) – A group of about a dozen U.S. State Department officials have taken the unusual step of formally accusing Secretary of State Rex Tillerson of violating a federal law designed to stop foreign militaries from enlisting child soldiers, according to internal government documents reviewed by Reuters.

A confidential State Department “dissent” memo not previously reported said Tillerson breached the Child Soldiers Prevention Act when he decided in June to exclude Iraq, Myanmar, and Afghanistan from a U.S. list of offenders in the use of child soldiers. This was despite the department publicly acknowledging that children were being conscripted in those countries.[tmsnrt.rs/2jJ7pav]

Keeping the countries off the annual list makes it easier to provide them with U.S. military assistance. Iraq and Afghanistan are close allies in the fight against Islamist militants, while Myanmar is an emerging ally to offset China’s influence in Southeast Asia.

Documents reviewed by Reuters also show Tillerson’s decision was at odds with a unanimous recommendation by the heads of the State Department’s regional bureaus overseeing embassies in the Middle East and Asia, the U.S. envoy on Afghanistan and Pakistan, the department’s human rights office and its own in-house lawyers. [tmsnrt.rs/2Ah6tB4]

“Beyond contravening U.S. law, this decision risks marring the credibility of a broad range of State Department reports and analyses and has weakened one of the U.S. government’s primary diplomatic tools to deter governmental armed forces and government-supported armed groups from recruiting and using children in combat and support roles around the world,” said the July 28 memo.

Reuters reported in June that Tillerson had disregarded internal recommendations on Iraq, Myanmar and Afghanistan. The new documents reveal the scale of the opposition in the State Department, including the rare use of what is known as the “dissent channel,” which allows officials to object to policies without fear of reprisals.

The views expressed by the U.S. officials illustrate ongoing tensions between career diplomats and the former chief of Exxon Mobil Corp appointed by President Donald Trump to pursue an “America First” approach to diplomacy.

The child soldiers law passed in 2008 states that the U.S. government must be satisfied that no children under the age of 18 “are recruited, conscripted or otherwise compelled to serve as child soldiers” for a country to be removed from the list. It currently includes the Democratic Republic of Congo, Nigeria, Somalia, South Sudan, Mali, Sudan, Syria and Yemen.

”The Secretary thoroughly reviewed all of the information presented to him and made a determination about whether the facts presented justified a listing pursuant to the law,” a State Department spokesperson said when asked about the officials’ allegation that he had violated the law.

In a written response to the dissent memo on Sept. 1, Tillerson adviser Brian Hook acknowledged that the three countries did use child soldiers. He said, however, it was necessary to distinguish between governments “making little or no effort to correct their child soldier violations … and those which are making sincere – if as yet incomplete – efforts.”

Hook made clear that America’s top diplomat used what he sees as his discretion to interpret the law.

Foreign militaries on the list are prohibited from receiving aid, training and weapons from Washington unless the White House issues a waiver based on U.S. “national interest.” In 2016, under the Obama administration, both Iraq and Myanmar, as well as others such as Nigeria and Somalia, received waivers.

At times, the human rights community chided President Barack Obama for being too willing to issue waivers and exemptions, especially for governments that had security ties with Washington, instead of sanctioning more of those countries.

“Human Rights Watch frequently criticized President Barack Obama for giving too many countries waivers, but the law has made a real difference,” Jo Becker, advocacy director for the children’s rights division of Human Rights Watch, wrote in June in a critique of Tillerson’s decision.

The dissenting U.S. officials stressed that Tillerson’s decision to exclude Iraq, Afghanistan and Myanmar went a step further than the Obama administration’s waiver policy by contravening the law and effectively easing pressure on the countries to eradicate the use of child soldiers.

The officials acknowledged in the documents reviewed by Reuters that those three countries had made progress. But in their reading of the law, they said that was not enough to be kept off a list that has been used to shame governments into completely eradicating the use of child soldiers.

Ben Cardin, ranking Democrat on the U.S. Senate Foreign Relations Committee, wrote to Tillerson on Friday saying there were “serious concerns that the State Department may not be complying” with the law and that the secretary’s decision “sent a powerful message to these countries that they were receiving a pass on their unconscionable actions.”

The memo was among a series of previously unreported documents sent this month to the Senate Foreign Relations Committee and the State Department’s independent inspector general’s office that relate to allegations that Tillerson violated the child soldiers law.

Legal scholars say that because of the executive branch’s latitude in foreign policy there is little legal recourse to counter Tillerson’s decision.

Herman Schwartz, a constitutional law professor at American University in Washington, said U.S. courts would be unlikely to accept any challenge to Tillerson’s interpretation of the child soldiers law as allowing him to remove a country from the list on his own discretion.

The signatories to the document were largely senior policy experts with years of involvement in the issues, said an official familiar with the matter. Reuters saw a copy of the document that did not include the names of those who signed it.

Tillerson’s decision to remove Iraq and Myanmar, formerly known as Burma, from the list and reject a recommendation by U.S. officials to add Afghanistan was announced in the release of the government’s annual human trafficking report on June 27.

Six days earlier, a previously unreported memo emailed to Tillerson from a range of senior diplomats said the three countries violated the law based on evidence gathered by U.S. officials in 2016 and recommended that he approve them for the new list.

It noted that in Iraq, the United Nations and non-governmental organizations “reported that some Sunni tribal forces … recruited and used persons younger than the age of 18, including instances of children taking a direct part in hostilities.”

Ali Kareem, who heads Iraq’s High Committee for Human Rights, denied the country’s military or state-backed militias use child soldiers. ”We can say today with full confidence that we have a clean slate on child recruitment issues,” he said.

The memo also said “two confirmed cases of child recruitment” by the Myanmar military “were documented during the reporting period.” Human rights advocates have estimated that dozens of children are still conscripted there.

Myanmar government spokesman Zaw Htay challenged accusers to provide details of where and how child soldiers are being used. He noted that in the latest State Department report on human trafficking, “they already recognized (Myanmar) for reducing of child soldiers” – though the report also made clear some children were still conscripted.

The memo said further there was “credible evidence” that a government-supported militia in Afghanistan “recruited and used a child,” meeting the minimum threshold of a single confirmed case that the State Department had previously used as the legal basis for putting a country on the list.

The Afghan defense and interior ministries both denied there were any child soldiers in Afghan national security forces, an assertion that contradicts the State Department’s reports and human rights activists.