Amid a politically-charged debate over its existence, Immigration and Customs Enforcement has removed war criminal Jakiw Palij, marking the 68th deportation of a Nazi from the United States.

Specifically for ICE, created in 2003, this marks at least the fourth Nazi arrest, deporting Nazi concentration camp guards John Demjanjuk and Josias Kumpf in 2009, and soldier John (Ivan) Kalymon in 2011.

“Despite a court ordering his deportation in 2004, past administrations were unsuccessful in removing Palij,” White House press secretary Sarah Huckabee Sanders said in a statement.

“To protect the promise of freedom for Holocaust survivors and their families, President Trump prioritized the removal of Palij. Through extensive negotiations, President Trump and his team secured Palij’s deportation to Germany and advanced the United States’ collaborative efforts with a key European ally,” Sanders added.

For months, some Democrats have demanded the government “abolish ICE,” which is charged with enforcing immigration law in the interior of the country. Last month, three House Democrats introduced legislation to shut down ICE. Meanwhile, other politicians and commentators have compared ICE with Nazis or the Gestapo for arresting illegal immigrants.

ICE is often associated with arresting illegal immigrants that cross the border, but the agency also regularly investigates naturalization fraud, passport fraud, illegal immigrants in possession of firearms, as well as the smuggling of drugs, money, counterfeit merchandise, and weapons into the United States. This includes confronting sexual trafficking, and in some cases, fighting child pornography.

Three ICE offices—Enforcement and Removal Operations, the Office of the Principal Legal Advisor, the Human Rights Violators and War Crimes Center—were all involved in the removal of Palij, according to ICE.

The ICE Human Rights Violators and War Crimes Center, established in 2009, locates and prosecutes human rights abusers in the United States, which includes those known or suspected to have participated in persecution, war crimes, genocide, torture, extrajudicial killings, female genital mutilation, and the use or recruitment of child soldiers.

“The arrest and removal of Jakiw Palij to Germany is a testament to the dedication and commitment of the men and women of ICE, who faithfully enforce our immigration laws to protect the American people,” Nielsen said.

Palij, the former Nazi officer arrested Monday in the Queens borough of New York City, was born in a part of Poland that is present day Ukraine.

Palij came to the United States in 1949, and lied to immigration officials, claiming to have spent World War II working on a farm and in a factory. He gained citizenship in 1957.

He trained with the Nazis in 1943 in German-occupied Poland. Court documents show those who trained him at the SS training camp in Trawniki participated in executing “Operation Reinhard,” a code name for the Third Reich’s plan to murder Jews in Poland. Palij served as an armed guard at the adjacent Trawniki labor camp.

“By helping to prevent the escape of these prisoners during his service at Trawniki, Palij played an indispensable role in ensuring that they later met their tragic fate at the hands of the Nazis,” Sanders said.

On Nov. 3, 1943, about 6,000 Jewish people held at the Trawniki labor camp were shot to death in one of the single largest massacres of the Holocaust.

A judge revoked his U.S. citizenship in 2003. U.S. Immigration Judge Robert Owens ordered his deportation in 2004 to Ukraine, Poland, Germany, or any country that would admit him, and a panel denied his 2005 appeal.

The Justice Department began targeting Nazis in the United States in 1979, won cases against 108 individuals, and prevented 180 individuals with ties to the Axis powers from World War II from entering the United States, according to ICE. But 68 were deported.

In May 2009, ICE deported John Demjanjuk, 89, a former Nazi death camp guard and a resident of Seven Hills, Ohio, to Germany to face criminal charges for 28,060 counts of accessory to murder. He was a retired auto worker in Ohio, and was born in what is today Ukraine. He came to the United States in 1952, concealing his Nazi past. It was one of the most storied cases that worked its way through the legal process for almost three decades.

Demjanjuk was first tried on allegations of participation in Nazi persecution in a civil denaturalization (citizenship revocation) case decided in 1981, and it was unearthed that he was a gas chamber operator at the Sobibor concentration camp where Nazis killed 250,000 Jews. In 1986, the U.S. extradited him to Israel, where the country’s Supreme Court found reasonable doubt. After his release, he returned to the United States.

In 1999, the U.S. initiated a new denaturalization case against Demjanjuk, relying in large part on captured Nazi documents that came to light following the 1991 dissolution of the Soviet Union, according to ICE. This evidence found he not only served at Sobibor, but also worked as a guard at the Majdanek camp, where Nazis killed 170,000 Jews.

A U.S. District Court in Cleveland revoked his citizenship in 2002. But it wasn’t until December 2005 that Chief Immigration Judge Michael J. Creppy ordered Demjanjuk removed from the United States to Ukraine, Germany, or Poland. The U.S. Supreme Court rejected Demjanjuk’s petition for review.

That same year, in March 2009, ICE removed Josias Kumpf, 83, to Austria. He was living in Racine, Wisconsin. He came to the United States after World War II.

According to ICE, Kumpf was a former Waffen SS Death’s Head Battalion guard at the Nazi-run Sachsenhausen concentration camp in Germany and at the Trawniki SS training camp in Poland, the same camp as Palij served, where Nazis murdered thousands of Jews on Nov. 3, 1943.

In September 2011, ICE announced that the Board of Immigration Appeals dismissed an appeal by John (Ivan) Kalymon, 90, of Troy, Michigan, affirming his deportation because of his Nazi activities during World War II. Kalymon, who came to the United States in 1949, shot Jews while voluntarily serving as a member of the Nazi-sponsored Ukrainian Auxiliary Police from 1941 to 1944 in German-occupied Lviv, Ukraine, according to ICE.

There were upwards of a thousand Nazis who were used by U.S. intelligence after the war by the CIA, the FBI, the military and other U.S. intelligence agencies — both in Europe as well as inside the United States, in Latin America, in the Middle East, even a few in Australia. And these were seen as basically cold warriors who served as spies, informants and in other intelligence roles. More here. 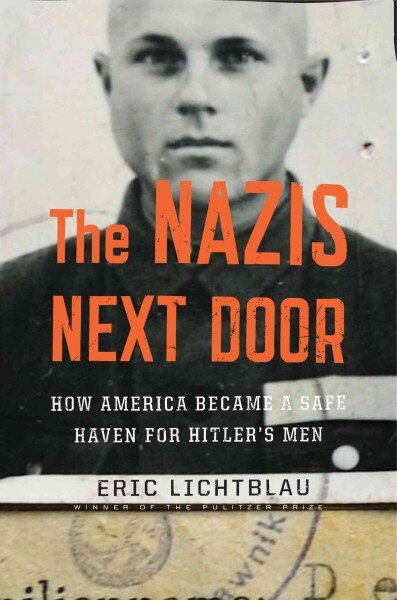