The recent trip to Venezuela by a group calling itself a Chicago Teachers Union delegation has upset some union members and expats who question the point of the tour and take issue with the group’s praise of the country’s disputed government.

The four travelers, who crowdfunded the July trip under the banner of the CTU, met with Venezuelan government officials and educators, visited a commune and were featured in local media. 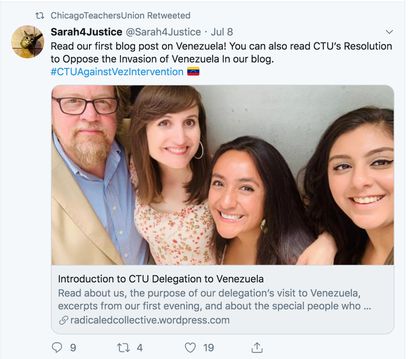 They wrote online about wanting to connect with Venezuelan teachers, students and unionists, criticized U.S. economic sanctions against the South American nation and wrote admiringly of its socialism, its communes and high literacy rates.

But critics say the group glossed over Venezuela’s ongoing political and economic crises and were excessively complimentary of President Nicolás Maduro, whose administration has been accused in recent United Nations reports of “grave” human rights violations and violence against dissenters.

“I am appalled a delegation representing themselves as CTU went to Venezuela, not to support striking teachers, not to object to human rights violations, but to go on what appears to be a state-chaperoned propaganda tour,” said Karen Moody, a teacher and union member.

And though the four travelers regularly called themselves a “CTU delegation” online, the union representing close to 25,000 people has sought to distance itself from the trip, stating the CTU did not endorse, sponsor or fund the trip.

Asked on WTTW’s “Chicago Tonight” last week about “some controversy” surrounding the excursion, union President Jesse Sharkey said: “Members go all kinds of places in the summer. This was neither an official trip nor something that was funded by the union. This is a group of people who are members of the CTU who decided to go to Venezuela.”

CTU also retweeted another post by teacher Sarah Chambers, one of the travelers and a member of the CTU executive board, which read: “While staying in #Venezuela, we didn’t see a single homeless person. USA is the richest country in the world; yet, there are homeless people everywhere. Over 17k CPS students are homeless… This is why @CTULocal1 is fighting for fair housing #CTUAgainstVezIntervention.”

When contacted by the Tribune, Chambers deferred to the group’s blog, Radical Educator Collective. The three who traveled with her — two other educators and a union organizer — did not respond to interview requests. Online, the group was clear the union wasn’t helping pay for the trip. At least 55 people donated to a GoFundMe campaign titled “Send CTU Strikers to Venezuela,” an apparent reference to their involvement in the CPS charter school strikes last school year.

For the full 5 page resolution of the Chicago Teachers Union and Venezuela, go here.