Lots of warm and fuzzies there….NOT

Three weeks ago, Lithuania accused Russia of deploying nuclear-capable ballistic missiles to its Kaliningrad exclave on the Baltic, as relations between Moscow and the West sink to post-Cold War lows.

Russia has previously sent Iskander missiles to Kaliningrad for drills, but Lithuanian President Dalia Grybauskaite said that this time they were being deployed for a “permanent presence”. 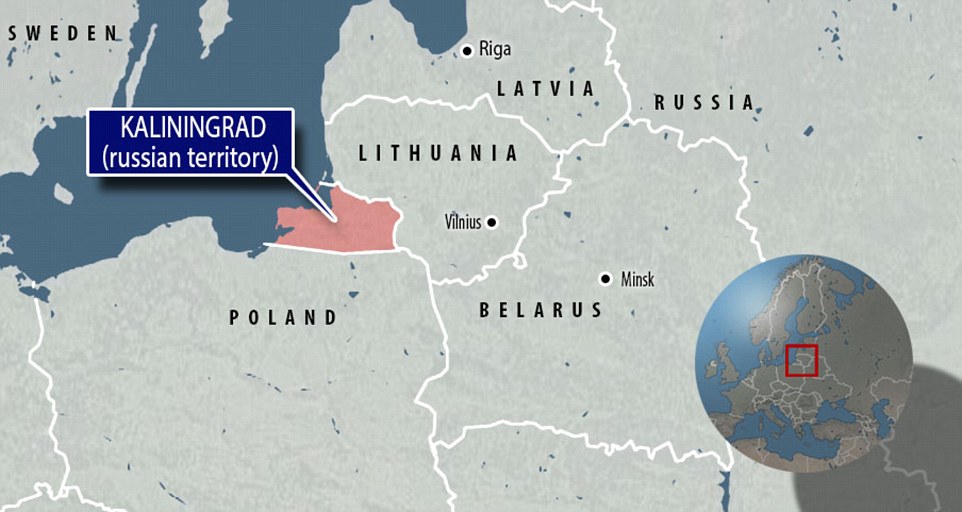 Putin said the weapons include a nuclear-powered cruise missile, a nuclear-powered underwater drone and new hypersonic missile that have no equivalent elsewhere in the world. He said the creation of the new weapons has made NATO’s U.S.-led missile defense “useless,” and means an effective end to what he described as Western efforts to stymie Russia’s development.

He noted that Russia had to develop the new weapons as the U.S. has developed a missile defense system that threatened to undermine the Russian nuclear deterrent and ignored Moscow’s concerns about it.

Russian President Vladimir Putin delivered his annual address to the country’s Federal Assembly today, showing off some impressive new weapons in the process. One of the concept videos even showed a nuclear strike using multiple warheads against the United States. The video depicts Florida, to be exact—the site of President Trump’s private club in Palm Beach.

“Any use of nuclear weapons against Russia or its allies, any kind of attack, will be regarded as a nuclear attack against Russia and in response we will take action instantaneously no matter what the consequences are,” Putin said during the address. “Nobody should have any doubt about that.”

The editor-in-chief of the Kremlin-backed RT news outlet tweeted “Elon Musk my ass” in response to the new strategic nuclear weapons, poking fun at America’s obsession with private space companies like Space X.

The Assembly broke into applause during the segment above when the video showed that Russia’s new rocket could hit any target on the globe.

“With the new system, there is no limitation,” said Putin. “As you can see from this video, it can attack any target through the North Pole or via the South Pole. No missile defense system will be able to withstand it.”

And while the part of the video showing Florida was relatively brief, it wasn’t subtle. If you had any doubt that it’s showing Florida, take a look at this Google Maps image side-by-side with Russia’s attack video.

When North Korea produces this kind of animation, they tend to blow up a city like San Francisco. The country did just that in a video produced last April.

“But this isn’t the end. We’ve developed new strategic weapons that don’t use ballistic trajectory at all, which means that missile defense will be useless against it,” Putin bragged.

Putin admitted that they don’t have any names for the new system in the animation and got a chuckle when he asked for members of the audience to submit proposals to the Defense Ministry’s website.

The new weapon uses a “nuclear power energy unit,” according to Putin. “This is how it avoids defense barriers,” Putin explained as the video played.

Putin also bragged about the noiseless “unmanned submarines” that can reach incredible depths that are “just fantastic.” The Russian president was sure to note that these were also capable of carrying nuclear weapons, though it’s unclear if the country has ever actually placed a nuke on a submarine without any humans aboard. All we know for sure right now is that their animators are working overtime.

“It was a big question whether we’d be able to develop strategic weapons at all. Some even asked whether if Russia was capable of servicing nuclear weapons we inherited from the Soviet Union,” said Putin. 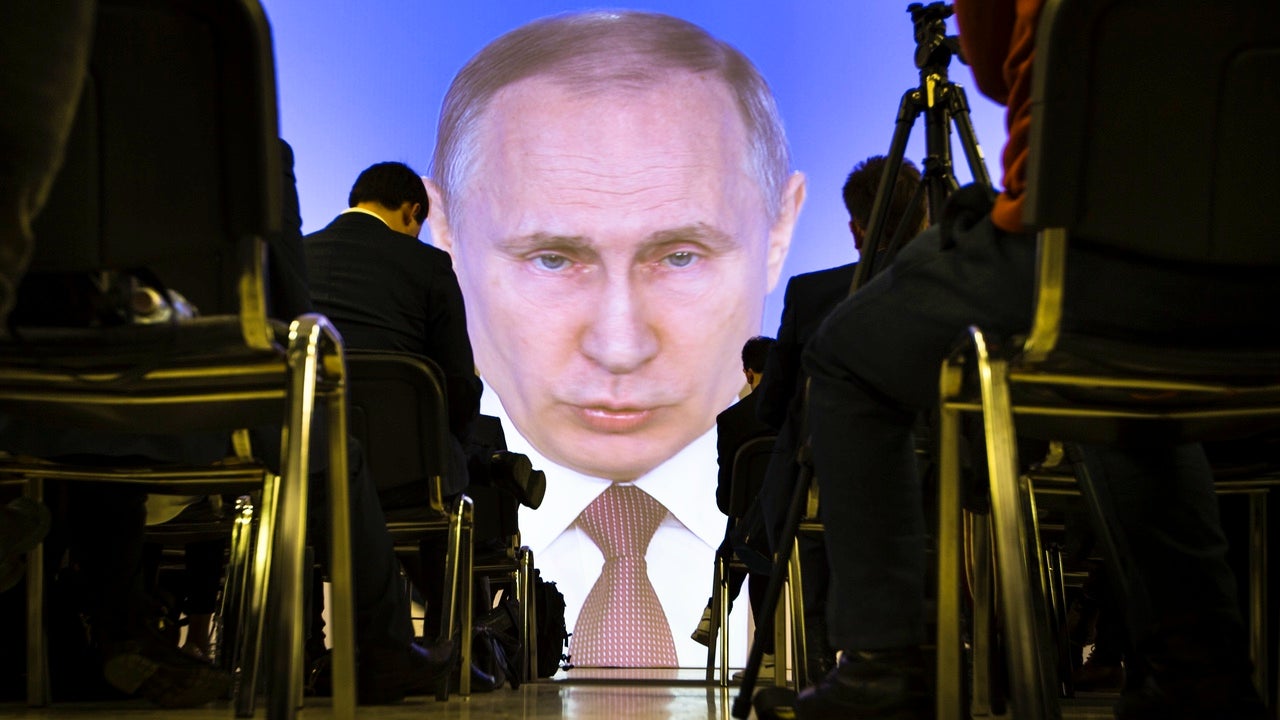 Putin said that the new weapons were developed in direct response to the US withdrawing from the ABM Treaty in 2002.

“In 2000, the US told us about its plans to withdraw from the ABM Treaty. Russia objected to this categorically. We believed that the treaty, the 1972 treaty, was the cornerstone, the international security architecture,” Putin said.

The full video of Putin’s presentation with English translation is on RT’s YouTube channel. Putin’s discussion of the military begins at the 1 hour and 15 minute mark.

“We made no secret of our plans. We spoke openly of what we wanted to do,” Putin said about the new developments in nuclear technology.

“We wanted to motivate our counterparts—this was in 2004. Despite all of the difficulties we faced over the years, economic and financial problems, problems with our defense industry, with our armed forces, Russia remained a nuclear power, but nobody wanted to talk to us seriously,” Putin said.

“They kept ignoring us. Nobody listened to us. So, listen to us now,” he said to rapturous applause.

“Putin’s statement makes it clear we are in a new arms race that will put us under the terror of a new Cold War, in constant fear of death at any instant,” Beatrice Fihn, the Executive Director of the International Campaign to Abolish Nuclear Weapons told Gizmodo in a statement.

“While Russia and the US compare the size of their arsenals, the rest of the world is joining a treaty that bans them.”

If you had any doubts that the New Cold War was upon us, you can stop doubting. 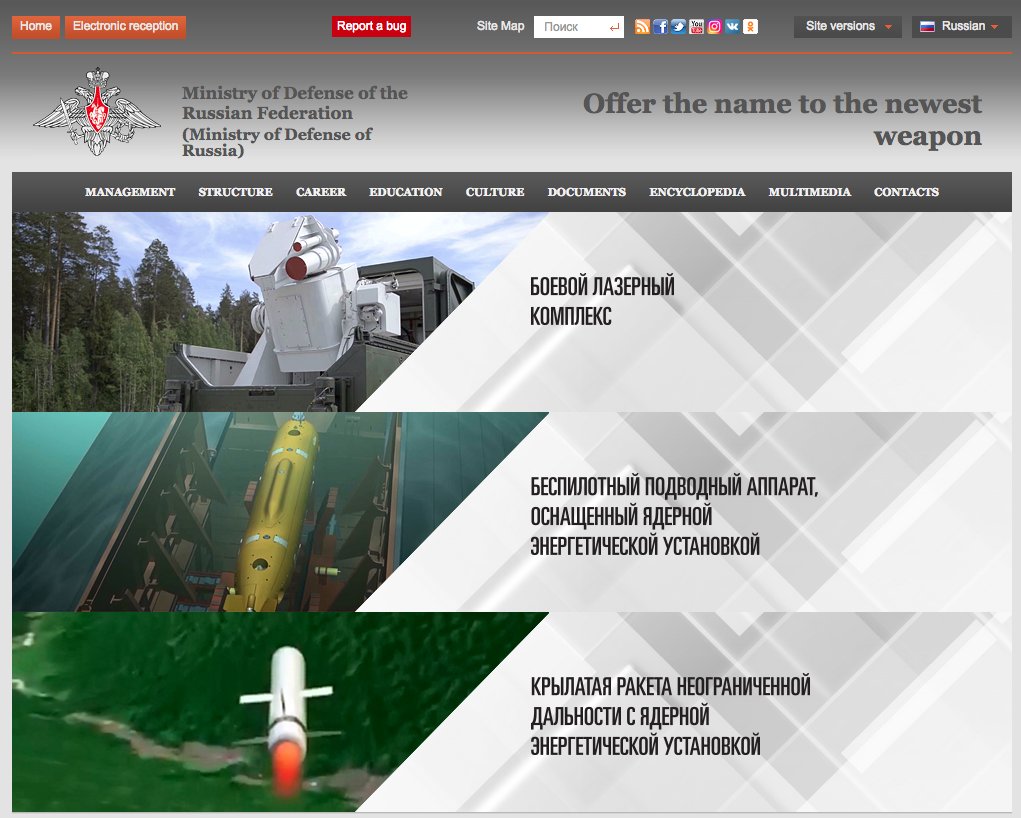 Update 9:53am: As the Russian website Republic points out, the animation of Florida getting nuked was probably first produced by Russia as early as 2007, making Putin’s use of that particular video today even weirder.

Thanks to Twitter user Honor Harger for the tip.

Update 2:15pm: Apparently Putin wasn’t joking. Russia’s Ministry of Defense set up a page on its website where people can submit names for the new weapons.

Nukey McNukeface comes to mind, but submitting a jokey name might not be the smartest move. People who make fun of Putin don’t get treated very well inside of Russia.