Several weeks ago, Politico published an article describing how President Trump failed to adhere to the 2016 Pandemic Playbook complete with the document itself. That is found here. 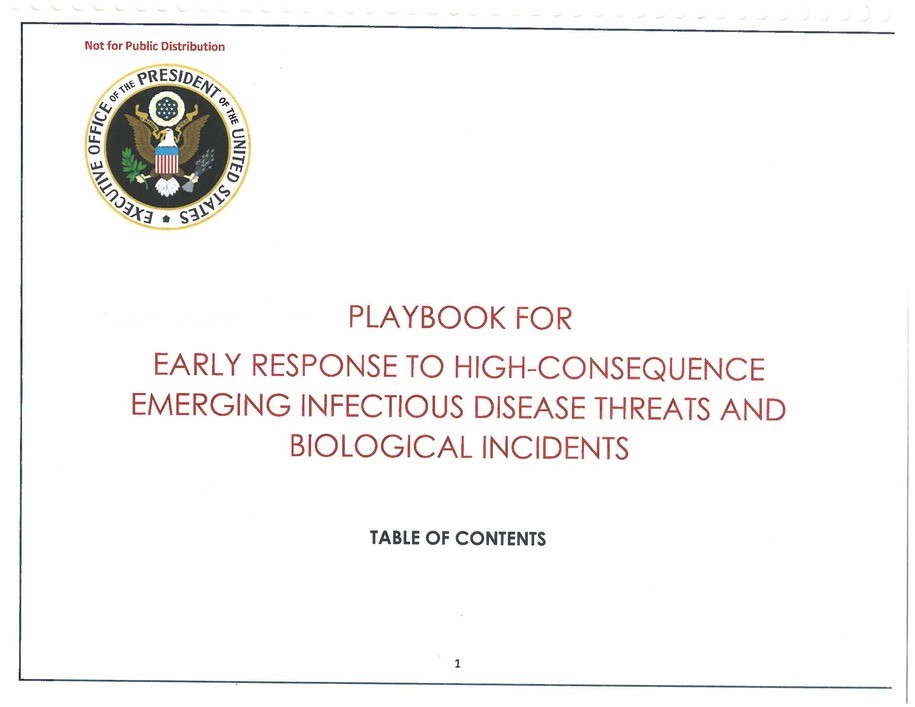 After it was brought to my attention, I read it thoroughly and began to break it down to determine the failures and faults. NBC News has picked up the same blame mission posted today.

The summary is noted below.

It begins with Congress when in the funding process of 2015 to 2016 or even to 2017, appropriations were never allocated to specific pandemic outbreaks other than the normal funding architecture for what is known as ICBRNR. This includes the omission of the Strategic National Stockpile inventory that was not adequate for a national outbreak, yet is annexed by individual state stockpiles including medical facility inventories. FAULT 1

The World Health Organization is the lead global organization of which the United States is the largest financial contributor to provide recommendations from assessments that include epidemiology, humanitarian/development/ public health impact, transmission/outbreak/potential for public concern. WHO was willingly prevented from doing this by the Chinese Communist Party.

Dr. Mike Ryan, WHO’s top emergencies expert, asked about an international business meeting held at a Singapore hotel on Jan 20-22, said it did not appear to have spread the virus widely.

“No, I think it is way too early and much more of an exaggeration to consider the Singapore conference event a ‘super-spreading event’,” Ryan said. ( Reuters: February 10, 2020)   FAULT 2

The WHO is to advise on travel, perform surveillance, infection control, tender medical cure(s) to the host country. After this advise and action by WHO, U.S. Health and Human Services then based on WHO assessments and recommendations, launches the National Emergency Action Center. WHO finally under pressure from the international community, admitted an error in its assessment of the Wuhan Laboratory on January 28, 2020. FAULT 3 (2 days later, President Trump restricted/halted flights from China into the United States).

Meanwhile, the United States through the U.S. State Department had several operations launched to address the potential global outbreak and that included running private flights to various locations around the globe to retrieve American citizens and bring them home. Further, earnest offers were being provided to Wuhan and Beijing by the USG to send in virologist and medical personnel to examine research protocols, gather lab samples, perform specimen sharing, collaborate on pharmaceuticals and treatments as well as to review global stockpiles, medical treatment infrastructure (read hospitals) and to offer proposed budget items to the U.S. Congress. Not only did were these offers extended to China, but to any other nation that was lacking in resources including Italy and Iran. FAULT 4 for China

Meanwhile as the Senate impeachment hearings began on January 16, 2020, the Trump administration launched the White House Coronavirus Task Force on January 29, 2020. The first known case of COVID -19 was reported in Washington State on January 20, 2020 as a 35 year old man had just returned from Wuhan on January 15. It was not until March 11, 2020 that WHO declared COVID -19 a pandemic. FAULT 5

As for all the other U.S. Federal agencies, they take the lead from HHS which takes the lead from WHO. The number of Federal agencies is substantial and not only do they include the normal well known agencies, they also include the Veterans Administration, USAID, Office of Global Affairs, embassies, FBI, CIA, GOARN otherwise the Global Outbreak Alert and Response Network. There of course is the CDC with clinical trial research papers, various trial invitations, there is the Customs and Border Patrol and the U.S. Coast Guard for cross border travel and sea travel, the FAA and the branches of the U.S. military. Orchestrate all that for the benefit of the state Governors who hold the most significant power and responsibility when outbreaks occur. It is the Federal government that only provides guidance and assistance as a multi-state event occurs.

This summary comes from reading the Politico article on how President Trump failed the Pandemic Playbook. That is hardly the case if one actually reads the whole playbook. After the 2016 playbook was authored and published in 2015 for 2016, did Congress standup a hearing to determine funding specific to a pandemic? The playbook recommended early budget and financial analysis and supplemental funding from Congress. Did that happen? NO Fault 6.

There is more but based on the items in the playbook, it was done by committee as a result of the Ebola outbreak in 2014. The playbook per the text is merely a checklist for domestic and international guidance.