Yup, both Congressman Eric Swalwell and Joy Reid of MSNBC are calling for a post Trump presidency Crimes Commission. Be careful what you ask for considering the work being done by AG Barr, John Durham and John Bash, not to mention the work of Senators Graham and Johnson. Timing is everything is Washington DC….lots to still be revealed. This comes on the heels of the Senate Intelligence (bi-partisan) report on Russia and the Trump campaign. Betcha, as Joy Reid refers to it, she hardly read it at all.

You gotta wonder if Reid or Swalwell have even considered ALL the crimes of the Obama administration or just a few of the Biden family clan….those from say Iraq or Ukraine or China.

The “U.S.-China Strong” group was founded to continue two Obama-era initiatives known as “100,000 Strong” and “1,000,000 Strong,” both of which sought to increase the number of Americans studying in China and introduce China-focused curricula into American schools.

The programs were promoted by the Obama-Biden administration despite valid concerns over Chinese Communist Party (CCP) sanctioned espionage, intellectual property theft, and propaganda.

Repeatedly praised by then-Vice President Biden, the initiative is no longer able to tap into U.S. tax dollars and now collaborates with a host of CCP-linked – and in some cases wholly-owned – entities including the Bank of China and Confucius Institutes. More here. 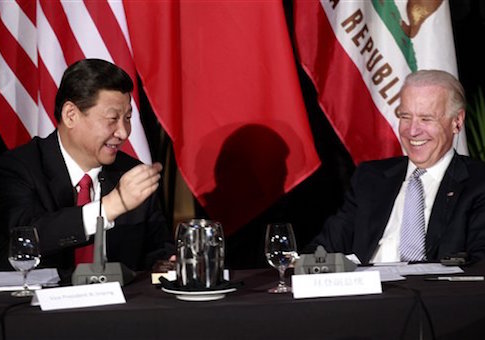 The Blaze reports: MSNBC host Joy Reid floated the idea of a potential future Biden administration establishing a “Trump Crimes Commission” to investigate President Donald Trump’s actions while in office — and perhaps even during his campaign, Mediaite reported.

Such a move would be unprecedented in American politics, as it is a longstanding norm that successors do not use their authority to investigate former political opponents.

Reid, an outspoken Trump critic, made the suggestion Tuesday night while discussing the final release of the bipartisan Senate report on Russian interference in the 2016 election with former Obama deputy national security adviser Ben Rhodes.

“It strikes me in just reading through this that Paul Manafort did to the United States what he had previously done to Ukraine,” Reid said. “He had messed with their elections in the past in order to put a [Russian President Vladimir] Putin puppet in charge. And now you have a president who is ruminating apparently on meeting with Vladimir Putin in New York, has talked about putting him back in the G7, and seems to be doing everything — you know, if there was a Christmas list that Vladimir Putin would have put together, it couldn’t have gotten any better than what Donald Trump is doing.

Reid is not the first to float such an idea. Journalist Andrew Feinberg and MSNBC legal analyst Glenn Kirschner have also called for a crimes commission to be empaneled, along with Democratic Rep. Eric Swalwell of California.

I don’t say this lightly: when we escape this Trump hell, America needs a Presidential Crimes Commission. It should be made up of independent prosecutors who look at those who enabled a corrupt president. Example 1: Sabotaging the mail to win an election. #SaveThePostOffice

Rhodes, in response to Reid’s prompting, essentially agreed with the proposition but with a few caveats about how it would look and how it should be executed.

“There is no question in my mind, Joy, that there has to be an accountability process if Joe Biden wins, to protect the integrity of our democracy,” he said. “It’s not about getting revenge. It’s not about going after political opponents. That’s what Donald Trump does. It’s about sending a message that if you collude with, facilitate, coordinate with a foreign adversary and hacking private materials and releasing them that there are going to be consequences.”

He added: “We cannot just say we’re going to turn the page. We have to deal with this as a country. And so I really think it’s essential that we have some accountability process if Joe Biden wins the election.”