The Slovak foreign ministry says it is “disturbing” that the Night Wolves – a Russian nationalist biker gang close to President Vladimir Putin – now have a base in Slovakia.

The base has old military vehicles and lies in Dolna Krupa, a village 70km (44 miles) from the capital Bratislava.

The Russian government calls it the Night Wolves’ “European headquarters”.

The bikers are under US sanctions, accused of providing military help for the pro-Russian rebels in Ukraine. So close in fact, Putin rode with them and endorses the group.

Earlier this year, the Night Wolves did a 9 day tour. Bosnia? Yes. 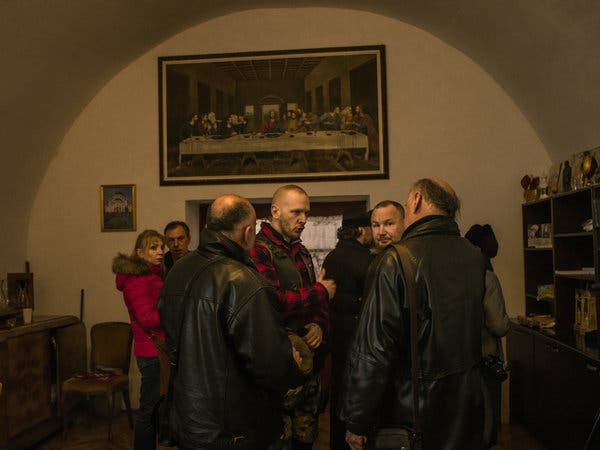 Members of the Night Wolves motorcycle gang visiting a monastery in Serbia. The gang’s tour, funded with a grant from the Kremlin, was billed as a “pilgrimage” meant to showcase the shared Orthodox faith of Russia and the region.CreditLaura Boushnak for The New York Times

Heck, the rode through the Balkins.

The Night Wolves billed their tour, funded with a $41,000 grant from the Kremlin, as a “pilgrimage” meant to showcase the shared Orthodox faith of Russia and the region, at least the bits of it inhabited by ethnic Serbs like Republika Srpska, which is legally part of Bosnia and Herzegovina.

Performances organized by the Russian hyper-patriotic biker club Night Wolves stand as prime examples of the Kremlin’s new take on old propaganda efforts. Their spectacles tend to display the full gamut of the Kremlin’s imagery and messaging, from the evil of the United States and Ukrainians to the glorification of the Russian Orthodox Church and the Russian military.

An analysis of Night Wolves spectacles reveals how the Kremlin’s agent provocateurs make use of the fuzzy lines between patriotism, pro-Putinism, Russian Orthodoxy, civic/national duty, and militarism. The purposes of these anti-American scripts are many, not least of which is to garner psychological and physical support for the motherland one way or the other, especially during the Euromaidan era, but also to create a sense of Russian identity, which has been vacuous since the early 1990s. The alarming aspect is that these types of fantastical attractions can transform patriotic attendees into actual networks of gun-toting Russian combatants, which may be part of the government’s objective. Read more here, chilling operation concocted by the Kremlin.

Did they have some role in Crimea and Ukraine? Yup. In 2014:

As night fell on Friday , there were signs that the Ukrainian peninsula of Crimea was slipping beyond Kiev’s reach. The parliament remained under siege by pro-Russian protesters, armed men of unknown allegiance were guarding the airports and the Night Wolves, a biker gang with close ties to the Kremlin, blockaded the roads.

Three hundred men in military uniforms with no identifying insignia had entered the Sevastopol airport compound on Thursday night, witnesses said, in what Ukraine’s new interior minister, Arsen Avakov, described as a “military invasion and occupation”.

In 2014, the U.S. Treasury added the Night Wolves to the sanctions list due to Crimea and in violation of the Minsk Agreement.

The Night Wolves biker group had its members serve in the Crimean self-defense forces as early as February 2014, which supported local Crimeans against the Government of Ukraine. In March 2014, the Night Wolves conducted intimidation and criminal activities within Ukraine and also abducted and subsequently assaulted a Ukrainian Border Guard official. This biker group also participated in the storming of the gas distribution station in Strikolkove and the storming of the Ukrainian Naval Forces Headquarters in Sevastopol. In early-April 2014, the Night Wolves helped smuggle a former senior Ukrainian official out of Ukraine and also helped obtain Russian passports for another larger group of senior Ukrainian officials that they helped get into Russia. The Night Wolves have been closely connected to the Russian special services, have helped to recruit separatist fighters for Donetsk and Luhansk, Ukraine, and were deployed to the cities of Luhansk and Kharkiv. The Night Wolves group is being designated because it is an entity that is responsible for or complicit in, or has engaged in, directly or indirectly, actions or policies that threaten the peace, security, stability, sovereignty, or territorial integrity of Ukraine.

Aleksandr Zaldostanov, also known as “the Surgeon,” is the leader of the Night Wolves. Zaldostanov chairs the overall Night Wolves organization, and some of his responsibilities include the punishing of chapter groups and members for disloyalty to the Night Wolves organization. During the late-March storming of the Ukrainian Naval Forces Headquarters in Sevastopol, he coordinated the confiscation of Ukrainian weapons with the Russian forces. Zaldostanov is being designated for being a leader of a group, the Night Wolves, that is engaging in, directly or indirectly, actions or policies that threaten the peace, security, stability, sovereignty, or territorial integrity of Ukraine.