Remember back  in 2014 there was a devastating condition in Nigeria of abducted school girls? The Congressional Black Caucus back then demanded the girls be returned and the terror group be brought to justice.

Anyone wonder where the United Nations is on trafficking in Africa?

Anyway, at the time in 2014, Marcia Fudge (D-Ohio), Sheila Jackson Lee (D-Texas), Barbara Lee and Karen Bass (both D-California) all gathered to hold a press conference outside the Nigerian embassy in Washington DC to make the declarations and demand.

As of March 2018, most of the 276 school girls have been freed and returned to their hometown, Dapchi, Nigeria. An estimated 60 escaped and others were sold then released by Boko Haram while a few others were rescued.

But now there is another nasty condition and it is trafficking. Hello Europe?

Highly organised Nigerian gangs are earning “extremely high profits” from trafficking children into 12 European countries, including Ireland, for prostitution, according to the EU police agency.

Europol said victims generate a smuggling debt of between €30,000-€60,000 each — and that paying off the debts can take years.

The agency said Nigerian criminal groups are organised into cells, typically run by females, known as “madams”, with men working in supportive roles.

The Europol report on the trafficking and exploitation of underage victims said southern EU countries, such as Italy and Spain, are the main entry points for trafficked Nigerians.

It said victims are then forced into prostitution in both the two entry countries and 10 other member states, including Ireland.

It said Nigerian organised crime gangs pose a “great challenge” to EU law enforcement. It said they were well organised, but not structured like most other crime networks. 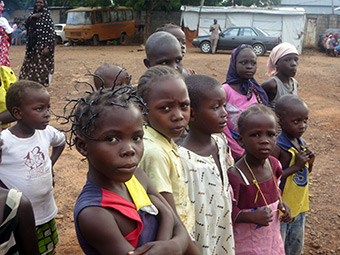 “The typical Nigerian criminal group is not hierarchically structured but rather organised into cells, among which female suspects usually execute the core business [recruitment and exploitation], with male members having supportive roles,” said the report.

“Contrary to other criminal groups involved in human trafficking, where female members are generally employed as victim controllers, the figure of the ‘madam’, including acting as a ring leader, is central for the Nigerian THB [trafficking of human beings] business.”

The report said the cellular structure makes it easy to move victims and that if one cell is dismantled by police, the other cells can continue operating.

It said: “Nigerian networks generate extremely high criminal profits, as each victim is forced to pay back the organisation usually between €30,000 and €60,000.”

It said most victims of Nigerian gangs were aged between 15 and 17, though the reports documents children aged 11-15 and some aged six-10 and even under five.

The girls were often promised well-paid jobs. The gangs often involved family relatives to persuade the girls to move and in other cases use voodoo rituals.

It said victims are passed from trafficker to trafficker and are “frequently subjected to physical assaults” and subsequently sexually exploited.

So, where is the Congressional Black Caucus now? Well they have moved on to water issues in Nigeria. Last July:

23 members from the Congressional Black Caucus (CBC) and Congressional Progressive Caucus (CPC) issued a letter of solidarity to the Our Water, Our Right Coalition in Nigeria which is leading an ongoing struggle for water access that has been sidelined for years by government attempts to privatize the water system. The letter makes direct connections between the struggle of the people of Lagos and that of people in U.S. cities like Flint and Detroit, Michigan and Pittsburgh, Pennsylvania. Read more here.

Now we understand that trafficking of children is a selective scandal for the Democrats….those from Central and Latin America and those in Africa. Has anyone in the CBC spoken out to the media about the new conditions in Europe and Nigeria? Anyone?

One last item, this is not a new phenomenon:

In an interview with Reuters at the end of May, Julia Siluyanova of Russian anti-slavery group Alternativa said: “We discovered that about 30 [Nigerian women] were brought to the Confederations Cup in Moscow last year… we expect to face the same problem during the World Cup this year.”

Law enforcement agencies across Europe and other regions routinely rescue young Nigerian women who have been smuggled out of their home country to work in brothels.

Many are put through juju voodoo rituals before being smuggled abroad, during which they are convinced that their relatives will suffer death or serious illness if they refuse to follow the instructions of their traffickers.

In February, police in the UK and Spain arrested 12 members of an international Nigerian sex trafficking gang who were said to have pulled out their victims’ fingernails and made them eat raw chicken hearts during juju rituals.