The actual closing date of the sale to Elon Musk is October 24, 2022. If there are issues with the sale and an exit attempt for either side, each party could be liable for a $1 billion penalty. Could that happen? The answer is yes for various reason. Details are here.

The Left cannot stand free speech or what they think is a monopoly. Former President Obama and the Biden White House has issued statements recently giving clues they are interested in continued censorship under the guise of damage to information and discourse. Very little attention was paid to a DHS bulletin from February of 2022 and includes in part:

The Department of Homeland Security’s latest terrorism threat bulletin includes a warning against “the proliferation of false or misleading narratives, which sow discord or undermine public trust in U.S. government institutions.”

The bulletin, issued Monday and in effect until at least June 7, blamed an “online environment filled with false or misleading narratives and conspiracy theories, and other forms of mis-, dis- and mal-information introduced and/or amplified by foreign and domestic threat actors.

“These threat actors seek to exacerbate societal friction to sow discord and undermine public trust in government institutions to encourage unrest, which could potentially inspire acts of violence,” DHS went on. Source

But what about lies or purposeful omissions as ‘mal-information’?

The Media Research Center, through its CensorTrack database, said it found 646 cases of instances where people who criticized Biden on Twitter or Facebook had their comments deleted, received speech restrictions, or were outright banned.

However…there is more….this could be an extraordinary development –> 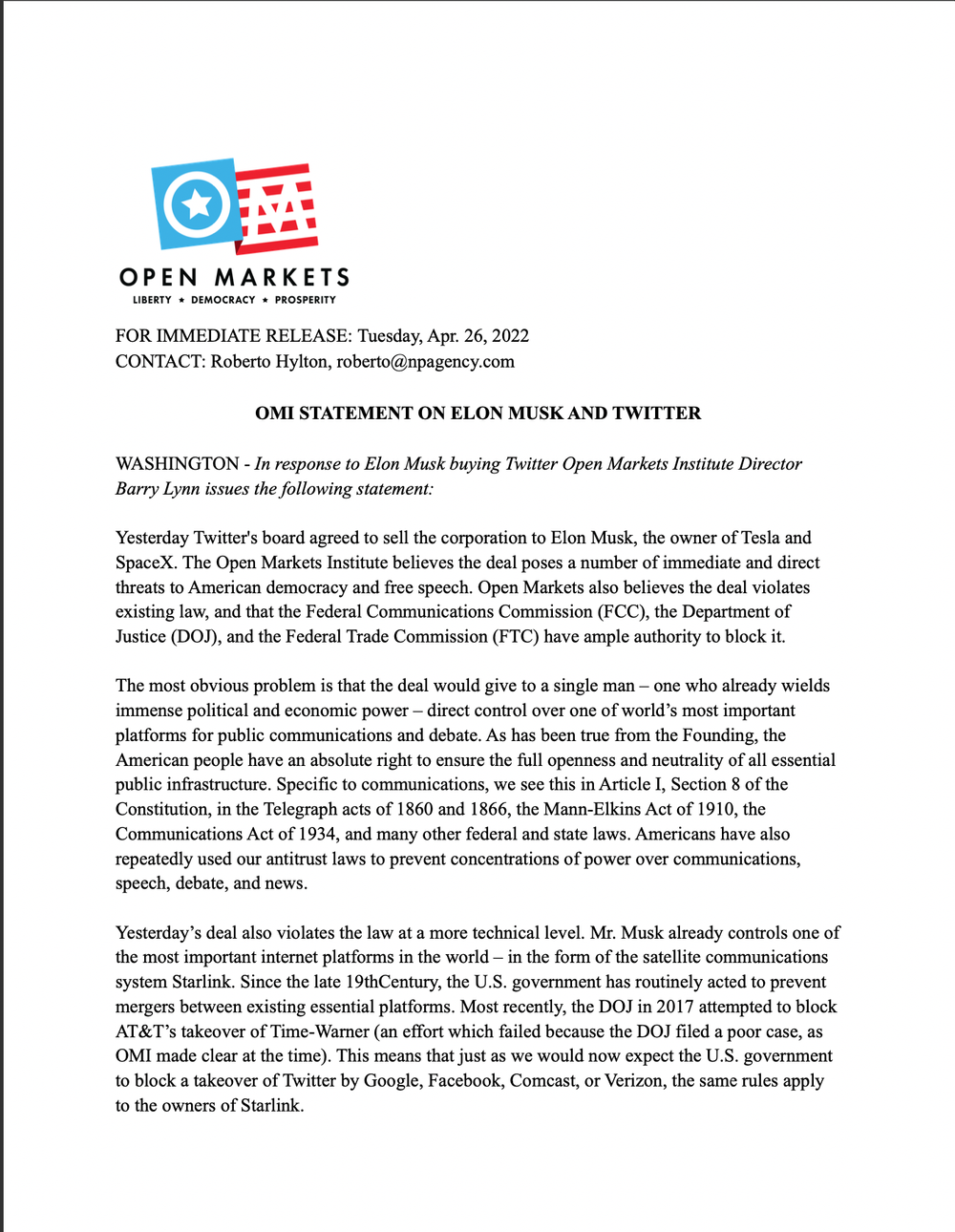 Who are these people you ask?

The Open Markets Institute works to address threats to our democracy, individual liberties, and our national security from today’s unprecedented levels of corporate concentration and monopoly power.

Launched as an independent organization in September 2017, Open Markets uses research and journalism to expose the dangers of monopolization, identifies changes in policy and law to address them, and educates policymakers, academics, movement groups, and other influential stakeholders to establish open, competitive markets that support a strong, just, and inclusive democracy. We focus especially closely on the new and growing threats that online “platform monopolies” pose to the free exchange of news, information, and ideas. Our team possesses deep expertise in how monopoly power distorts outcomes in major markets, ranging from the technology sector to agriculture to pharmaceuticals to transportation.  Prior to 2017, the Open Markets Team spent eight years studying, speaking, and writing about the problem of market concentration as the Open Markets Program at New America.

By combining policy, legal, and market structure expertise with sophisticated communications and outreach efforts, Open Markets seeks not only to hold today’s monopolies accountable for abuse of power, but to rebuild an economic system where progress is easier to achieve, because power is far more widely and equitably distributed.

• Shining a light on monopoly power and its dangers to democracy through original newsletters, op-eds and articles, videos, events, and special features on a broad range of topics that reach large, diverse audiences.

• Laying out solutions and influencing enforcement and policymaking at the state, federal, and international level through in-depth policy reports, testimony, comment letters, and petitions.

• Engaging directly in the law by filing amicus briefs to shape outcomes in court cases that affect monopoly power and educate the broader legal community.

• Investing in extensive communications and outreach efforts to cultivate a broad range of allies and ensure our ideas don’t sit on the shelf.

• Engaging in civil society and grassroots coalitions, such as Freedom From Facebook and 4Competition, to bring movement energy to bear on targeted policy objectives.

Do you see the hidden forces out there coming to the light? Rather ironic and hypocritical right?