In a brief written statement, he said: “Senators should expect to remain in session in August to pass legislation, including appropriations bills, and to make additional progress on the president’s nominees.” More here.

At least that is something right?

All of us are mad, no furious with members of Congress. Imagine when some of those members are more angry than YOU at the system?

Leadership works with lobbyists and then leaks to the media. And then you think you have the whole story. Ah, not at all.

Just a teaser for Episode 3 is below.

The Swamp from Daniel Lippman on Vimeo.

Watch the full first episode of The Swamp here ==> https://t.co/W4Uotgi3ii

In 2017, Congressman Ken Buck of Colorado wrote a book titled Drain The Swamp.

It is a great primer and a book that can be read in a day. What does go on behind closed doors in Congress? Yep, you will learn it fast. What about those committee assignments and chairmanships? Yep, they are bought. Have you considered discretionary spending? It is illegal. A large handful of congressional members are in fact on our side. Some are so disgusted they are leaving Congress.

Run out and buy the book: 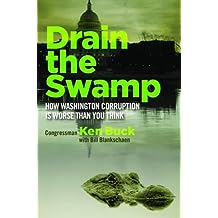 Congressman Buck is hardly a rebel but there are those colleagues that say he is.

Yes due to the weapon on the wall for which he was investigated a few years ago.

Remember that shooting at the ballfield? Well, as an aside, prior to that these congressional members packed heat. Likely more are doing the same now.

Here are the members of the House Freedom Caucus who say they currently carry, or did as of 2013 (all are Republicans):

“The purpose of the Second Amendment was to ensure that the citizenry could protect itself from a dictatorial and out-of-control government,” Brooks told TheDCNF.

“It has long been a primary goal of kings, dictators, communists, fascists and the like to disarm the citizenry so that there is minimal risk of opposition to centralized government, dictating to the citizenry that is unarmed and defenseless, and unable to assert their rights,” he said. (some of them have already left congress)