Russia war crimes did not begin with the invasion of Ukraine, those with short memories should be reminded that all the same tactics were used in Syria and went unpunished. Shameful, but read on.

As Russia continues its assault on Ukraine, top Biden administration officials are working behind the scenes with the Ukrainian government and European allies to document a tsunami of war crimes allegedly committed by Russian forces. But the sheer volume of the documented war crime cases could be too overwhelming for Ukraine’s justice system as well as for the International Criminal Court (ICC), raising questions of how many cases will be brought to trial and how many accused Russian war criminals could ultimately face justice. 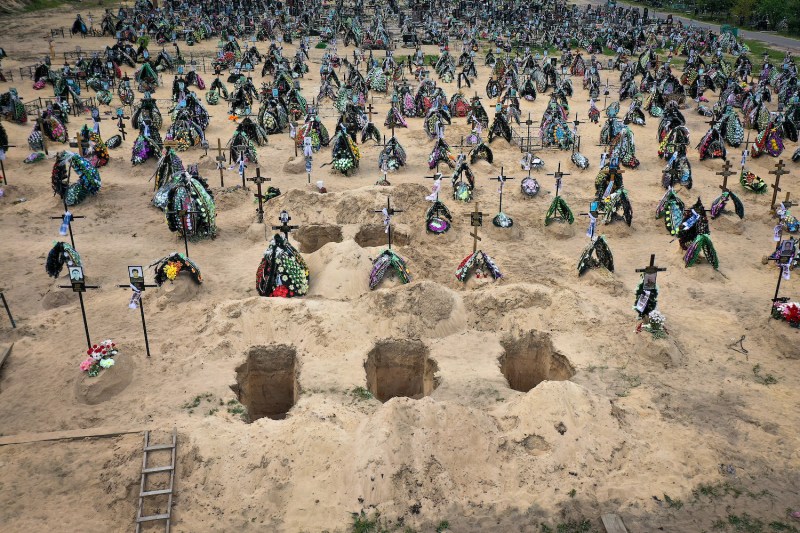 An aerial view of crosses, floral tributes, and photographs of the victims of the battles for Irpin and Bucha that mark the graves in a cemetery in Irpin, Ukraine, on May 16. Christopher Furlong/Getty Images

“This is a Nuremberg moment in terms of just the sheer scale of the breach of the rules-based international order that has been perpetrated by Russia in this invasion,” said Beth Van Schaack, the U.S. ambassador-at-large for global criminal justice. “Even the most well-resourced prosecutorial office would have a hard time grappling with the sheer scale of the criminality that’s been on display.”

The French Gendarmerie’s experts, including specialists in drone modelling, ballistics and weapons of mass destruction, have been collecting evidence at sites of destruction from Russian shelling.

They replaced group of gendarmerie forensic experts who arrived in mid-April to help establish what happened in Bucha, near Kyiv, where the killing of many civilians provoked a global outcry.

“It will soon be two months since (French experts) have been with us ‘on the ground’,” Prosecutor General Iryna Venediktova wrote on her Facebook account.

“They work in the Chernihiv region and conduct research at sites destroyed by shelling,” she wrote. “These war crimes must be punished, and we are ready to do together everything to do
so.”

The Chernihiv region has been shelled frequently since Russia invaded on Feb. 24. Ukraine is also investigating potential war crimes by Russian soldiers in Chernihiv during their occupation in March.

Russia denies targeting civilians and has rejected allegations of war crimes in what it calls a “special military operation” to demilitarize and “denazify” Ukraine.

Kyiv and its allies say Russia invaded its neighbor without provocation. source

“Of course we started a few thousand cases about what we see in Donbas,” prosecutor general Iryna Venediktova told a news conference in The Hague as she met international counterparts.

“Then, of course, we can speak about torturing people, killing civilians and destroying civilian infrastructure.”

Ukrainian authorities did not have access to Russian-held areas of Donbas, but they were interviewing evacuees and prisoners of war, Venediktova told the press conference at the headquarters of EU judicial agency Eurojust.

In total, Ukraine had identified 15,000 war crimes cases across the country since Russia’s invasion on February 24, she added.

Ukraine had identified 600 suspects for the “anchor” crime of aggression, including “high level of top military, politicians and propaganda agents of Russian Federation,” the prosecutor general said.

Nearly 80 suspects had been identified for alleged war crimes that had actually taken place on Ukrainian soil, she added. source